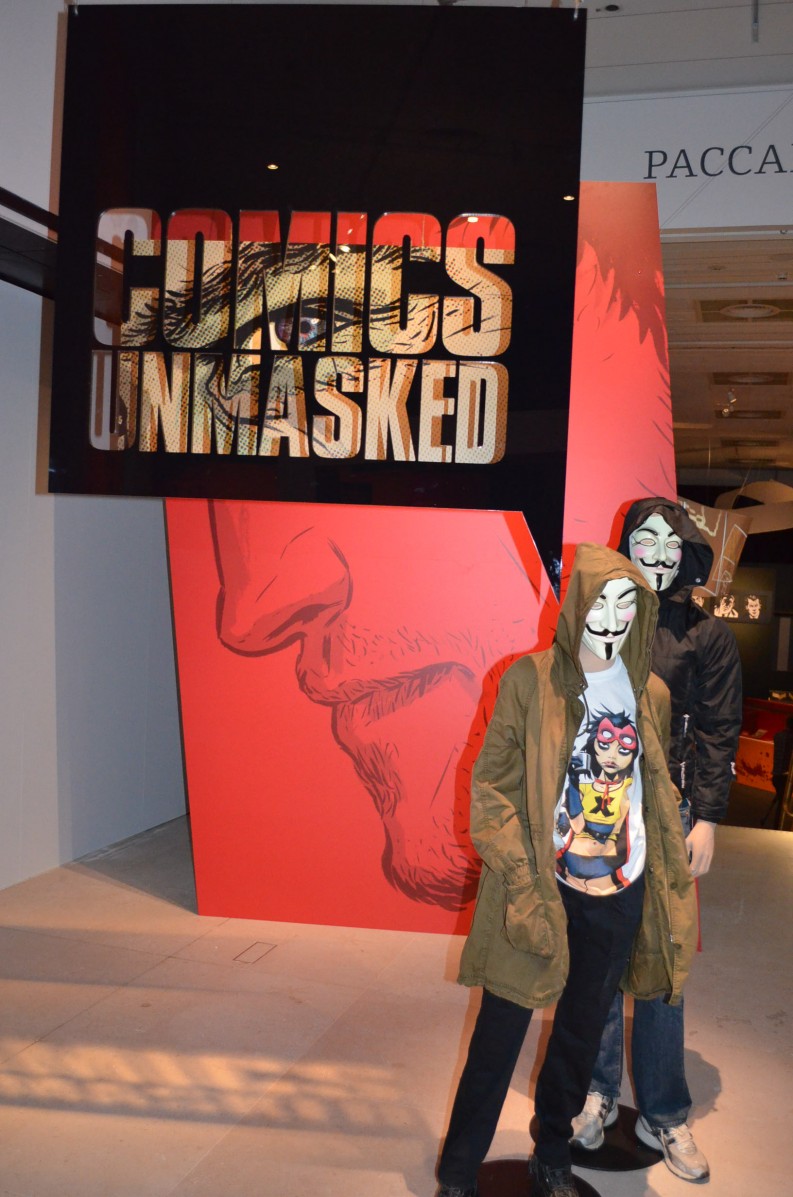 The timing is perfect. Just as comicbook fans continue to seethe over Amazon’s acquisition of Comixology – or, more exactly, Amazon’s decision to remove in-app purchasing from Comixology’s IOS app – so the UK’s biggest ever comic book exhibition, Comics Unmasked: Art and Anarchy in the UK, opened at the British Library in London.

The iconic, menacing ‘V men’, so well known from Protest and Occupy movements around the globe leer at visitors around every corner and give the show an appropriately edgy, urban feel. The exhibition has two clear aims, say the organizers – to change people’s perceptions and, more importantly, celebrate the creators of what is an overlooked art form.

“This is about acknowledging those artists who have not been given the recognition they deserve,” said co-curator John Harris Dunning, author of Salem Brownstone and the driving force behind the exhibition. “We hope that this show will stimulate creative disobedience and throw down the gauntlet to young creators – as well as show audiences, who perhaps have not read comics before, what a diverse and exciting medium they are.

“I was stalking the Library for two years to get this off the ground. The demystification of the process of creating comics is a key part of this exhibition, with once in a lifetime opportunities to see original artwork and scripts from comics greats.”

Among the latter are the original script of Alan Moore and David Lloyd’s V for Vendetta, which gave birth to all those Protest and Occupy masks; Neil Gaiman’s notebook and sketches for The Sandman, China Mieville’s workbooks for his revival of the old DC Comics title called Dial H for Heroes and an original William Burroughs spread from a story called The Unspeakable Mr Hart.

There is older material too, much older. The Library’s Head ofPrinted Historical Sources, Adrian Edwards, highlighted the Biblia pauperum – literally, Bibles of the poor. These were 14th century block books which told religious stories in cartoon format. “In many ways there are the first comics,” he said. “You have panels and speech balloons and angels killing dragons…”

There are examples of the first black characters to appear in UK comics, and the first Muslims. There is also a cover of the Marvelman Family fighting the Klu Klux Klan – “I don’t remember Superman taking them on,” observed co-curator and comics historian Paul Gravett. An entertaining Picture Post cover from 1952 asks ‘Should US comics be banned?’.

Gravett told journalists and comics world bloggers at last week’s private view: “We have plundered the Library’s archives to unearth so much rare material. Beneath your feet are five bat caves of storage. The Library also has a ‘fortress of solitude’ in Lincolnshire where more is kept.” Everyone understood the first reference; the second some may not know: it refers to Superman’s ‘place of solace’ and occasional headquarters in a polar waste.

The exhibition is arranged in various themes, one of which looks at the genre’s connections to the world of magic and the occult. Rare exhibits here include the original 1580s workbook of John Dee, alchemist and advisor to Elizabeth 1, and Aleister Crowley’s dog-eared manuscript for his Diary of a Drug Fiend, dedicated to his ‘scarlet woman’ Leah Hersig and bound with her hair ribbons. There is also a display of old paperbacks by HP Lovecraft who has influenced modern authors like Moore and Grant Morrison.

Gravett says: “Comics are much more than childhood nostalgia – they are are a powerful adult medium which can reflect and impact on society and change’s people minds and lives. From the very start, comics have been cross-pollinating with movies, music, theatre and all the other media and today are on the cutting-edge of digital storytelling and multi-media installation art.”

A Strong Market for Comics

It’s a good time for comics in the UK. According to Nielsen’s Books and Consumer survey, sales of graphic novels and comic books increased from £18.6m in 2012 to £20m in 2013, with a unit increase of 2.1m to 2.4m. This may be because there almost always seems to be a new Spiderman movie, or it may be that such niches are downturn proof. Whatever the reason, the genre bucks some of the trends in the wider market.

Fans everywhere though, certainly seem to be angered by Amazon’s move which they say removes an easy, one-click way to make purchases and forces readers to leave the app and use a cumbersome, multi-step process. They say it is all about Amazon avoiding paying Apple’s 30% levy, with no regard for the inconvenience to the consumer.

As a result though, one much smaller player is enjoying an increase in traffic. Sequential, the Japanese-owned digital graphic novel storefront and reader app, focuses on more literary graphic novels and is noted for having a strong editorial voice. It was described by Gravett at the exhibition as “the thinking man’s Comixology”, and it is providing a free download about the exhibition, with excerpts from 25 featured graphic novels and comics.

“We tend to concentrate on longer form works – we don’t do superheroes,” said Editorial Director Chloe Pursey. “And yes, we’ve seen some increase in traffic as a result of what has happened with Comixology. I certainly know some people have been saying ‘where’s my stuff?’, they haven’t been able to find it.”

In the meantime, how curious that those anti-Establishment Occupy figures now find themselves on display in a very pillar of the British Establishment.