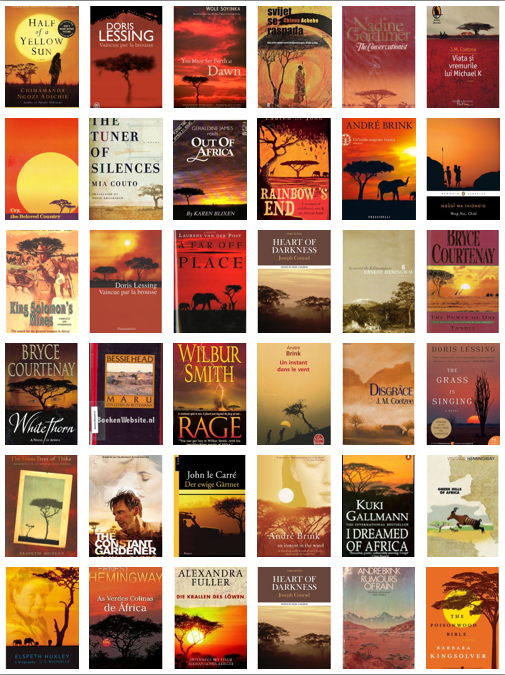 “Whatever kind of writing you do, if you write a novel ‘about Africa,’ chances are you’re going to get the acacia tree treatment. And the orange sky.”

A post at Africa is A Country points out the obvious:

“We’re obliged to Simon Stevens, a reader who put together the picture above and pointed out that whoever you are, wherever you’re from, whatever kind of writing you do, if you write a novel ‘about Africa,’ chances are you’re going to get the acacia tree treatment. And the orange sky.”

Or, as Jeremy Weate tweeted in, “icily,” “Funny that. Nigeria is not known for its acacia trees.”

And Edna Mohammed wrote on Africa is A Country’s Facebook page: “I hope one day we can finally upgrade to baobab trees or something.”

As the post concludes, “the covers of most novels ‘about Africa’ seem to have been designed by someone whose principle idea of the continent comes from The Lion King.”

And at Quartz, Michael Silverberg, in a piece entitled “The reason every book about Africa has the cover – and it isn’t pretty” wrote:

“What makes the persistence of these tired and inaccurate images even worse is that we’re living in an era of brilliant design (including this lovely type-only cover for Chimamanda Ngozi Adichie’s Americanah; her novel Half of a Yellow Sun begins the collage above). So why is it so hard for publishers of African authors to rise beyond cliché?”

To get an answer, he spoke to Peter Mendelsund, a cover designer, associate art director at Knopf, and author of the upcoming What We See When we Read (Vintage Original)

Mendelsund pointed first to simple “laziness, both individual or institutionalized.” Since most Americans, (including book designers) are unfamiliar with the world outside of America, they don’t always take the time to respond to each book individually, and fall back on visual clichés. And, he pointed out, editors don’t always remember what made the manuscript so unique to start. “In the case of non-Western novels, they often fall back on framing it with ‘a vague, Orientalist sense of place,” Mendelsund said, aided by “risk-averse” marketing departments.

“By the time they manuscript is already to be produced,” Mendelsund told Silverberg, “there’s a really strong temptation to follow a path that’s already been trod. If someone goes out on a limb and tries something different, and the book doesn’t sell, you know who to blame: the guy who didn’t put the acacia tree on the cover.”

But, he added, the problem runs deeper: “Of course, there are the deeply ingrained problems of post-colonialist and Orientalist attitudes. We’re comfortable with this visual image of Africa because it’s safe. It presents ‘otherness’ in a way that’s easy to understand. That’s ironic, because what is fiction if not a way for you to stretch your empathetic muscles?”

Silverberg pointed out that while some books are allowed to “stand on their own,” it’s too often the case that books by Africans, Muslim or female authors are “assigned genre stereotypes.” Mendelsund’s idea is that designers should talk with the book’s editor about what make that book special, so that “they have something to respond to visually.” And if doesn’t work, and designers are asked to use an “offensive stereotype,” Mendelsund says that, “We can tell them that it’s racist, xenophobic, whatever.”

Still, Mendelsund predicts that one day there will be a best-selling novel by an African writers whose cover will use “a different visual aesthetic,” and its success will “introduce a new set of arbitrary images to represent Africa in Western eyes. “But right now,” he told Silverberg, “we’re in the age of the tree. For that vast continent, in all its diversity, you get that one fucking tree.”