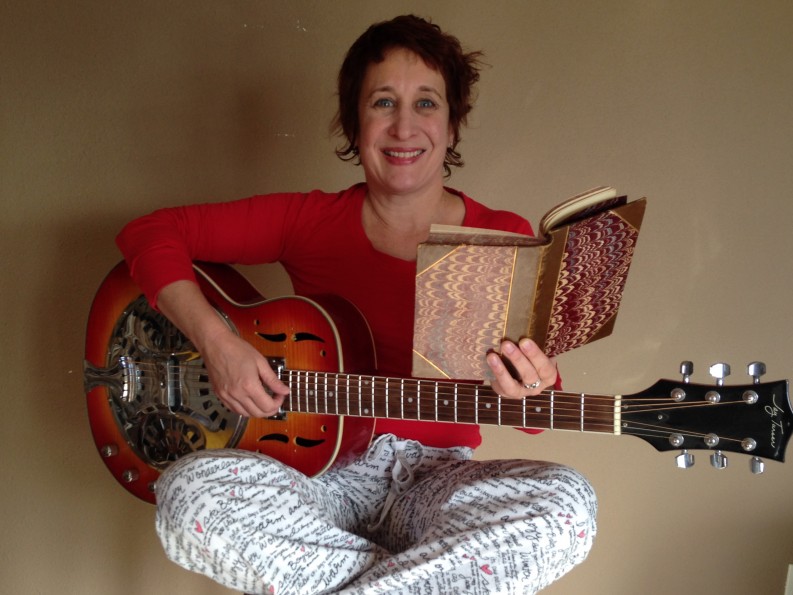 Author Sharon Glassman confronts the angst she felt facing the publication of her second novel following a poor experience with her first — and what to do about it.

“When your mind’s lost its breadth and your bod yells, “It’s death!” that’s a Trauma” – with apologies to Jack Brooks, lyricist, “That’s Amore”

Last month, I had one of those Great Days as an author. I picked up a box of novels – my novels! – for the live show I was doing in Boulder, Colorado. The book’s plot and characters delighted me; the cover was adorable. Even the box was cute, in a book-bearing, cardboard-y way.

I drove my box of books home and set it on my kitchen counter. And then? Color me flummoxed. I couldn’t open the box.

Maybe I’m learning to exercise delayed gratification, I thought, and went to sleep.

That’s when the flashbacks started. Twelve years ago – true story – I went on a national book tour that didn’t exist, organized by a publicist who went AWOL while I traveled from non-event to non-event. It was a heartbreaking, soul-crushing, career-smushing experience that cost me my advance (I’d paid the publicist with it) and my relationship with my then-publisher (according to my then-agent).

Time to bounce back. Get moving! my brain said, when I got home to Brooklyn.

But my body disagreed. It stopped sleeping, dropped 30 lbs and developed a fear of sudden noises, along with every sleeping pill side effect you’ve seen advertised on TV. And then, yadda, yadda, I’m a performing novelist and songwriter in a northern Colorado town folks call The Brooklyn of Boulder.

That bad book tour was ancient history, my brain insisted. But my body disagreed, again. First came the flashbacks. Then, I started losing weight. I stopped sleeping…

“This is nuts!” I told the box of books a few days later. “You’re great. Life’s great. But my body’s in siege mode.

Could something as ‘nice’ as publishing a book lead to a form of PTSD?, I wondered.

As it turns out? Yes.

Why? Because the human body is an equal-opportunity employer of something called survival mode. And survival mode comes in one size and one color – XXL Code Red. It’s the somatic version of Schiaparelli pink: a screaming, hot hue that may not suit all wearers, or occasions.

So, what is trauma?

The human brain responds to a perceived threat by shutting down the analytical brain, slowing digestion and making our breathing shallow, allowing us to fight, freeze or flee.

These responses were forged in cave dweller days, explains Christine Gust, a former Halliburton HR manager who teaches practical applications of stress management tools in Colorado. And back then, this little menu of reactions made sense. Pausing to analyze a saber-tooth tiger’s threat-level could be deadly.

But today, Gust says, “When the survival brain gets activated, none of us is facing tigers.”

Enter dis-order. The brain perceives a threat, yells, “Tiger!” and goes into breathless, reactive survival mode. But where is the reset button, and how do we access it?

In cases of Acute Stress Disorder, Clancy says, a person’s responses return to normal a month after a trauma. But when symptoms endure – or surface – after a month, we’re in the realm of Post-Traumatic Stress Disorder. The body alternates between stress overload and attempts to numb it. She likens this to an endless tennis match with oneself.

How does PPSTD impact authors?

Kathleen Shaputis is an author in Seattle. In 2000, she got a book contract for a how-to book called Grandma Online. She writes:

I thought this was it, I would be able to be a full-time author. I was scheduled to be on CNN […] My interview was scheduled for Sept. 12, 2001. I received a one-line email from the producer, “I guess you know we cancelled your interview.”

Which with all the chaos of 9/11 going on, he was sweet to even send that. I’ve had guilty feelings ever since. How can I be angry that my 90-day best window of getting my book out there was trashed when thousands of people lost their lives and their loved ones. I’ve since gone on to publish other books, but still flinch – what will happen this time?”

When we chat by phone, Shaputis sounds friendly and upbeat. But she says she’s still dealing what the personal and professional fall-out of 9/11.

She says feels guilty about playing “the pity card.”

“You’re already in trauma because we’ve been attacked. And my dream’s been squashed. But I really can’t complain, because people died.”

She rates her trauma as “a six or a seven when it happened and a three now.” But that three impacts her life, and her work.

“As writers, we have too many voices in our heads,” she says. “With PTSD, you have to fight to get past one more demon to stay about the keyboard.”

How can Shaputis deal with her dueling traumas?

The first step to dealing with trauma is to acknowledge it’s real.

Ignore the people who say, “Get over it,” Clancy says. “They’re telling you’re a couple of different things: ’I can’t bear to hear your pain, so please shut up,’ ‘I’ve been through something worse’ and ‘This is the best I can say to you right now.’”

Instead, she recommends talking with a respected loved one, exploring online resources or working with a therapist to help “shrink the trauma from this is my whole entire world to just one thing that happened to me.”

Christine Gust recommends techniques that help rewrite the brain’s ingrained memories and associations of trauma. She points to NLP (Neuro-linguistic programming), a technique used to help race car drivers reframe bad races, among other things. She also likes EFT, a technique of tapping on meridian points on the head and body, to diminish the brain’s survival responses to past trauma.

“The reason I like it,” she says, “is because it’s effective.”

EFT sounds odd. But the word “effective” appeals to me. And when we speak on the phone, I’m in round two of my current old-tour trauma. So we try it.

Gust leads me through two rounds of tapping on the top of my head, face, hands and chest.

When we begin, I rate my PPSTD as 8. I’m sleepless and jittery-brained. I recently pulled out my library card to pay for my groceries (hello, painful metaphor!).

When we’re finished, I rate my stress as a three. I feel calm and can think clearly. That night, I sleep like a rock.

It sounds woo-woo. But Gust sees this transition as a natural progression.

“If we were dogs leaving the vet’s office, we would just shake it off or pant, and it’d be over,” she says. “People, on the other hand, replay events, creating neural pathways that replay old pain as new.

Another way to bypass those painful, ingrained neural pathways is to ask new questions about old traumas.

“It engages the mind in a more positive way,” Gust says.

Some questions she recommends are, “What if I don’t have the whole picture yet?” and “What’s possible I haven’t thought of?”

And this one, which Gust offers to authors as a passionate reader: “Who’s looking for this book?”

She’s serious. “That latest book on pruning I bought? Thank God someone published it!” Gust says.

Which brings us to the happy form of stress known as eustress.

NYC author Judith Glynn’s experiences as a travel article writer inspired her first book. She reports feeling a stressful sense of loss after publishing it. That sense of loss motivated her to revisit an old manuscript. That manuscript became her second book.

“Now people are asking me what’s my next book?” she emails. “That’s stress, too, but one I can manage as I think about another book.”

In Seattle, Kathleen Shaputis is finding unexpected success as a romance novelist while working a day job at a printing company. And she’s thinking about writing a second edition of Grandmas Online.

I ask her if she sees this second edition as a second chance to rewrite history, or a different chance altogether.

“It’s a different chance,” she says. “It’s a whole different world ten years later. I think it’d be a lot of fun. It could be bigger, better and more if I let myself do it.

“I should just kick myself and go do it,” she says.

Or, perhaps, a few taps could do the trick?

Sharon Glassman is an author and performer living in Colorado. She performs and sings episodes from her live novel-with-songs, BLAME IT ON HOBOKEN, at public and private events called The Lazy Person’s Book Club