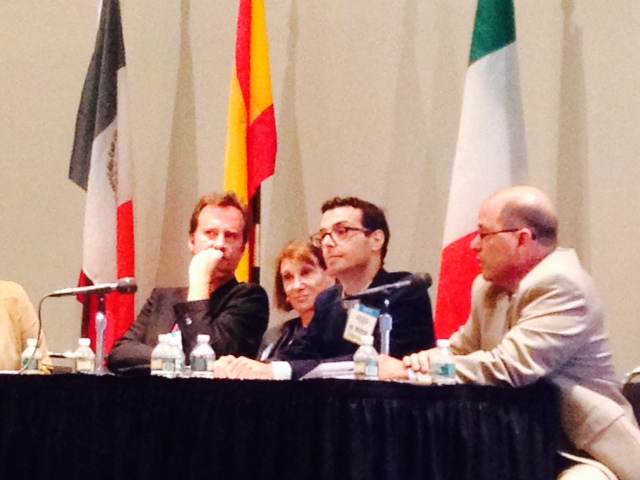 In their anthology, Read.Russia: An Anthology of Voices an introduction written by Antonina W. Bouis evokes the space inhabited by the tribe of silent translators. She writes, “A good translation should be transparent and unobtrusive, and then, of course, like a good mobile phone connection, it is taken for granted. Strangely enough, not only is a good translation not credited with bringing an otherwise inaccessible work to light, but the blame for a bad translation somehow falls on the original text. Clumsy wording and awkward English grammar are attributed to the author, not the invisible translator. Some writers never get a second chance, having been introduced to readers in an inadequate translation and found lacking.”

The issue of finding good translators is paramount. “As a writer you need to be in the hands of good agent or publisher who puts your work forward,” said literary scout Maria Campbell during a panel discussion on translation at yesterday’s Global Market Forum at BookExpo America. “To get into English you have to participate in finding right translator. They’ve always been important, but we need a greater interest in books in translation. We need a greater recognition of translators. Programs for translators in higher degrees…where are they? It’s like an underground hobby!”

Antony Shugaar, a writer and translator who spoke on the Case Studies panel, elaborated on the complexity of the craft, illustrating with an example of how Google has helped him tremendously in this work. “I can look anything up. I can go to Google maps and find that a stabbing took place on asphalt and not concrete.” The irony of Google saving the day for the translator – whose bread and butter relies on the laborious craft of translation – wasn’t lost on the panel.

One case study in attendance was Spanish novelist Marcos Giralt Torrente (author of The End of Love, published by McSweeney’s). Torrente got lucky with his translations; three hugely talented people worked on his books in the last year. “In the end, what you ask for from a translator is to recognize your own voice. It’s not so often. But I had this feeling that I could recognize my own voice. None of them betrayed my prose, or my style. I have a style of long sentences and I think you must respect style. Before, my sentences were cut in half, which was not my experience with Katherine and Natasha [ed note: translators Katherine Silver and Natasha Wimmer, respectively].”  Shugaar summarized the thread: “I feel very unconcerned about computer translations taking my job anytime soon.”