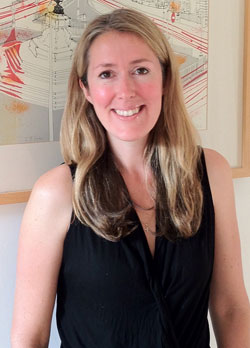 Stephanie Gauld, Digital Publisher at Egmont UK believes the culture gap between publishers and games developers can be bridged, though misconceptions persist. Stephanie Gauld of Egmont UK is sanguine about the relationship between publishers and games developers.

Stephanie Gauld, Digital Publisher at Egmont UK, speaking at the seminar “How to Work with Games Developers” held at the London Book Fair last month and discussed in today’s feature story, feels that “there has been a real cultural shift” between publishers and developers.

Gauld has the authority to make such a proclamation, having worked both sides of the great divide. She led the children’s CBeebies brand as it became one of the most popular BBC interactive services in the UK and served as Head of Club Penguin, a virtual world for children, in the UK, before moving to Egmont.

“Two years ago there was real excitement with digital because you can change it and can update it, but there was a real danger of project creep and going over budget as people in publishing realized ‘Oh my god! I can change this and add that’ – even if it felt that developers were speaking another language.

“I think that has now changed and it is very collaborative now. They are still kind of surprised that I ask for so much feedback, as they are more used to the nurturing of a single talent. But now you need people to work together and collectively come up with a strong idea.”

Speaking the day after the seminar Gauld felt there were simple reasons for this cultural divide: “Publishers are well-established.”

“It’s a well-oiled machine with tried and tested business models. We know what our roles are. Digital is relatively new and it’s incredibly dynamic. We have developed business models but these are constantly evolving due to new possibilities and skills.”

However, she feels that there are “slight misconceptions on both sides – the tendency to think that print is a lot easier, or digital is a lot easier to create than it actually is. Over the past two years I’ve seen a growing respect for both industries. After all, the printed book is one of the first pieces of portable technology. As we work more closely together both sides are beginning to realize just how much expertise goes into their medium.”

Tiffany Leeson, Egmont UK’s Art Director, adds that “whether in print or digital, working with someone who knows their medium is really insightful. You have to just listen to them and be guided by their experience.’

“At Egmont UK we partner print and games people to overcome knowledge barriers like these and help the games designers understand that you have to really know about print to design something beautiful. It is quite different. Fat fonts and bold design that works well on digital look clunky on paper, for example.’

In the end does the gender divide between publishing and games developer make a difference?

“This isn’t something that’s so marked in children’s publishing or children’s digital media. It can’t be generalized in the same way as it possibly could be between designers of first person shooters and publishers of romantic fiction,” says Stephanie Gauld.

You mean the guys talk over women and are more aggressive?

“Rather than male and female, it is better to partner people up in terms of their strengths: creative and organized!,” says Leeson.

For Leeson, “As publishers we listen to and respect our authors, collaborating with them to get the best books. We have also had to learn that brand owners and game developers are also experts about their property.