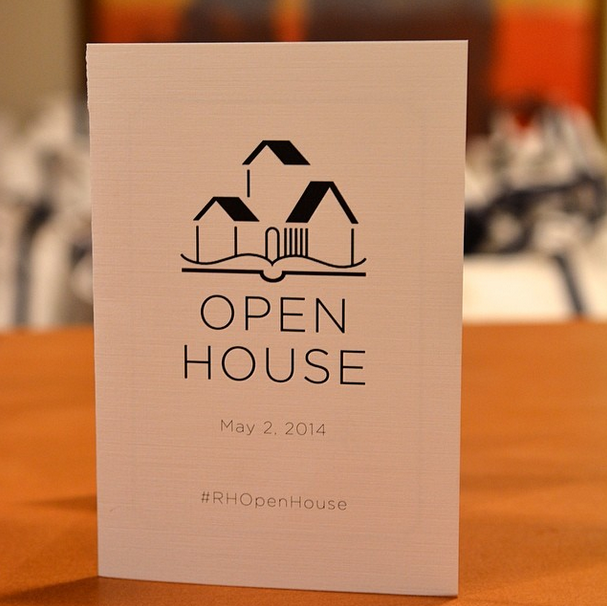 Last Friday, May 4, the Random House headquarters on Broadway and 55th Streets in New York City opened their doors to a large flock of enthusiastic readers, aspiring writers, students, and all other manner of walk of life. Their Open House celebrated their readers by offering the spoils of the best of BEA to come: plenty of coffee, food, cocktails, and of course, charming writers hawking their wares. The day began with celebrity Jenny McCarthy who spoke to her editor Marnie Cochran about her latest book, aptly titled Stirring the Pot. McCarthy dished about her View co-host Barbara Walters (“I asked her why she wears fishnets every day and she said ‘Because, Jenny, they’re sexy and nylons are not’”); her engagement to Donny Wahlberg; mothering a 12 year old, and more. The decidedly female audience whooped it up when Cochran said “Let’s clap for the ring!”

McCarthy packed a lot of heart into her self-possessed appearance. Despite the fact that she’s a lighting rod for hot opinions regarding sex, autism, and more, you just end up liking the girl. When she signed my copy of her book she put a big heart above her first name, and it will probably end up parked between my signed copy of Lethally Blonde by Kate White, and Having it All by Helen Gurley Brown.

Andrew Fitzgerald of Twitter moderated a panel with Gary Shteyngart and Emma Straub, who both have new books on the table (Little Failure and The Vacationers, respectively). The panel was about storytelling in 140 characters, and hit on a common (and somewhat tired, truth be told) theme of finding a balance between the personal and the professional on social media. Straub has felt at home on Twitter practically since its inception, but Shteyngart said “I wish I could outsource this to India. They could personalize things and make it sound like me.” Both are teachers, and Shteyngart, speaking of Twitter, admitted to often replacing teachable moments in his mind with Tweetable moments. Lunch brought ‘wichcraft sandwich boxes and three choices: mingle amongst yourselves, or join one of two panels, art department or editorial. I cramped into the overcrowded editorial conference room which was covered in framed Dr. Seuss book jackets; a sweet reminder, just as the black and white Nobel portraits that lined the halls, that this was a hallowed land of sorts. This panel seemed aimed to prospective entry-level edit folks and aspiring writers, and the advice to both was sound. Writers should perfect their elevator speeches and not make them “DH Lawrence meets Joyce” because what editor will be able to sell the next Ulysses to their sales team? Also, they should have a strong protagonist that readers can love from page one. Should they be on social media? You bet… and one Science Fiction editor offered a case study of one of his writers who did it very well by guest blogging for about 19 like-minded blogs; by the time his book came out, he’d amassed a bundle of mini-publicists, if you will.

I Love You Too… After lunch brought meditation, which seemed apt given that the large events space on the second floor was adjacent to the Yoga Conference Room (I swear it said that on the phone display). Panache Desai, author of Discovering Your Soul Signature, has appeared on Oprah’s Super Soul Sunday, discussing his recipe for finding, yes, your true Soul Signature. He’s an attractive Indian guy raised in London, and his charisma filled the room with self-forgiveness and non-conformity, because “conformity kills” and “your emotions are killing you from the inside out” (a phrase repeated two or three times). As canned as this can sound, I swooned when he signed my book with “I Love You.” He loves me! Editors at Random House are banking on the fact that a large collection of readers will also love him and buy into his “journey out of fear and into love.” Why not, right?

Finding a Dedicated Space to Write

The last panel was a group of writers who represented the Summer Reads list: Darcie Chan, Mira Jacob, Chris Pavone, Susan Rieger, and Maggie Shipstead all had interesting things to say about their various writing practices, from being isolated on Nantucket for eight long and cold months to the average problem of procrastination. The takeaway here seemed to be to find a dedicated space to work that works for you, whether it’s a cafe, a deserted island, or a cabin in the woods. Which leads me to Ruth Reichl’s presentation about her novel Delicious!  Reichl described her own space in the woods as a tiny cabin that she built, replete with a wood stove. She painted a picture of walking through a snowy path to stoke a fire on cold mornings before heading back to her house to have breakfast, and then heading back to her by-then-warmed cabin, which has a beautiful view, and where she stays until she’s done for the day.

After we were done for the day, the catered happy hour appeared. Editors drank alongside their writers and fans in one big fete of happy and well-fed, catered by the estimable DePaolo’s from Little Italy (they have a book coming out from Random House, so go figure). The cheese was runny and stinky and the drinks were strong. We wandered back onto the streets laden with tote bags filled with ARCs and signed books, awaiting the next extravaganza around the corner.