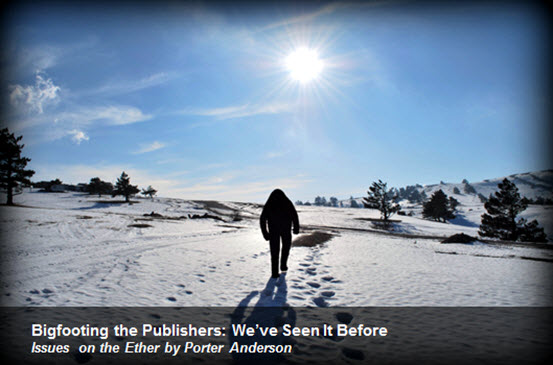 Has anybody told the readers about this? You know, the customers? What if they were brand-savvy enough to know what they’re missing when a contract dispute stalls out the shipping of their favorite author? What if we tell them?

Publishing Perspectives Editor in Chief Edward Nawotka and I will host a live Twitter chat on this week’s Ether topic(s) at 11 a.m. ET / 8 a.m. PT—and that’s 4 p.m. BST in London.

We’ll use the hashtag #EtherIssue as we do weekly. Join us and watch for @PubPerspectives and @Porter_Anderson on Twitter.

When Retailers & Publishers Collide: Who Gets Hurt?

Like those great-caribou-fights the nature productions love to trot out from time to time, we love this stuff.

Everybody gathers around — “fight! fight!” — as the ground shakes and the furry bone cracks.

If you search for Hachette print titles on Amazon’s website, you’ll see that many of them are taking several weeks to ship, even though they’re in stock at other sites. Malcolm Gladwell’s Outliers and James Patterson’s NYPD Red, for instance, are listed as shipping within 2 to 3 weeks. Ebooks aren’t affected, and not all Hachette titles are affected: Donna Tartt’s The Goldfinch is shipping right away, for example. It’s important to note that there’s no comment from Amazon on this. It’s from Hachette Book Group’s spokeswoman, Sophie Cottrell, speaking to Michael Cader at Publishers Lunch, that we get the publisher’s interpretation of what’s happening. In Many Hachette Print Books Are Hard to Get From Amazon, As “Negotiations Are Underway”, Cader quotes Cottrell:

We are satisfying all Amazon’s orders promptly, and notifying them constantly of forthcoming publicity events and of out-of-stock situations on their website. Amazon is holding minimal stock and restocking some of HBG’s books slowly, causing ‘available 2-4 weeks’ messages, for reasons of their own. We are grateful for the patience of authors and all Amazon readers as we work to reach an agreement and to encourage Amazon to be back to offering Hachette Book Group’s books within normal shipment times.

It’s that “patience of authors” phrase that may strike a chord with many.

Remember when Barnes & Noble was in a standoff with Simon & Schuster last year? In that case, some new releases (not all) from S&S appeared not to be making it into the stores. Here we were, writing about it for Publishing Perspectives in March 2013.

And in Writing on the Ether at JaneFriedman.com, we referenced author M.J. Rose’s compilation of books that were being released without shelf space in the bookstore chain’s store. Have You  Seen These Books?” Rose’s good effort on her own site was to help readers know which authors’ books were out of sight as the negotiations dragged on.

Friedman, in fact, had tweeted earlier about the parallel with the B&N action of last year. And in a quick exchange with Mike Shatzkin on this, he and I were agreeing that these are comparable situations, cases in which dominant retailers are able to disrupt normal points of sale for the biggest publishers.

I’d point out that this does suggest how little traction some branding has achieved in publishing.

If readers were aware of who published what and, in the current example, became incensed that their favorite authors’ books from Hachette were  being held back from them, they (those readers) might make a concerted complaint to Amazon. Last year, if S&S readers had banded together in their thousands to stare down Barnes & Noble, then that situation might not have played out so slowly.

But readers who don’t see David Streitfeld’s Writers Feel an Amazon-Hachette Spat in the New York Times may not know why Malcolm Gladwell’s print books are listing as taking two to three weeks to ship. You’ll meet few avid book fans who can tell you that S&S authors’ work was suppressed in the earlier scenario or that Hachette authors are being impacted by the current round.

As publishers struggle to meet readers, they’re learning the readers don’t know them, either.

And as author and Writer Beware columnist Victoria Strauss has tweeted:

In fight between Amazon and Hachette over sales terms, authors are "collateral damage." http://t.co/KphT7YRmd5

The story to which she refers in her comment is a Publishers Weekly piece on the standoff, without byline, Much at Stake in Amazon-HBG Fight, that includes, in part:

What is frustrating to others in the industry, is that the tactics Amazon uses to get a better deal from publishers on terms often places authors in the crosshairs. There is no doubt that the efforts used in the Amazon negotiations with HBG are aimed at getting authors to put pressure on HBG to reach an agreement, one publisher said, adding that publishers need to communicate to authors and agents about what is at stake—a diverse retail landscape.

And look for the phrase “sour author relations” in this passage about agent reactions to the situation:

Agents contacted by PW were generally supportive of publishers’ efforts to maintain a vibrant bookselling ecosystem…with a few caveats. If an author’s titles are to be “collateral damage,” as one agent put it, in a fight between Amazon (or another major account), this agent said they don’t want to hear about slipping numbers when it the time comes to sign a new contract. This agent continued: “Hearing ‘oh, the numbers, our hands are tied,’ after a smack down between two corporate entities tanks an author through no fault of their own, is a fabulous way to sour author relations.”

This is, finally, where it stops, with authors being the ones damaged.

An interesting side point here is that you couldn’t expect to pull off tactics of this kind with ebooks. Consumers know those things should be immediately available once they’re launched. These battles are always fought over print, the Old Country of publishing

And if the readers did know how retailers and publishers were playing with authors’ livelihoods — and book availabilities — would they stand for it? If branding had been successful enough for consumers to know that something wasn’t right when their favorite authors’ print books became delayed online or invisible in stores, would they put up with it?

Perhaps not. And perhaps this is another case for education of the consumer, the one who might be able to put an end to such draconian bigfooting when when major players collide.

An update: author Hugh Howey has published an article, Amazon and Hachette Go to War, in which he notes the higher level of coverage for the Hachette-Amazon fracas than we saw for last year’s bookstore showdown:

What I find fascinating is the increased coverage this time around. The NYT and Publishers Weekly have published scathing reports accusing Amazon of being a bully. I would have loved some of that directed at B&N last year. You see, Barnes & Noble was holding authors and readers hostage in order to wring more cash out of publishers, because they are having a hard time making that money by actually selling books. They got a pass for this.

Howey sees a “backwardness of this PR war,” one that paints Amazon as the bully. He writes:

What you have is a company fighting for lower prices for customers, while keeping the pay for publishers and authors the same, and they [Amazon] are [depicted as] evil. While B&N holds publishers hostage just to rake in more cash to present customers not with what bookstore employees wish to highlight, but what they are paid to highlight…It’ll be a great day when publishers realize they stand to lose a lot by allowing bookstores to dictate their business decisions. Especially when it’s the large chains that put so many mom and pop joints out of business over the past decades.

And: “The real losers are the authors and readers, of course.”

Let’s talk about it.

What If the Readers Knew About This?