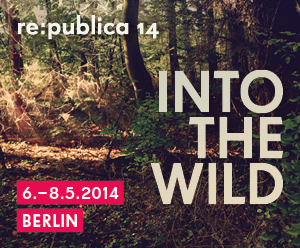 What We Learnt mural at Republica14

With 6,000 bloggers, you can expect a lot of tweets, Facebook posts, and other digital ephemera to emerge from re:publica14, Berlin’s annual answer to SXSW Interactive. “But we want to shy away from that comparison,” said co-founder Andreas Gebhard, in a brief conversation on the grounds of STATION-Berlin, the grounds of a former postal freight station where the event was held from May 6-8. “SXSW is one thing. We have our own identity,” he noted. For starters, the event is self-consciously more overtly political than in Austin. Net neutrality, censorship, and surveillance issues are very much on the agenda. The German tech community, by American standards, may appear hyper-sensitive with regards to issues of privacy, but this should come as no surprise considering the country’s history and the location of the conference.

The star of the first day was Sacha Lobo. Dubbed by Deutsche Welle as Germany’s “top internerd” he drew a standing-room only crowd who heartily clapped as cajoled them to do more than stand by passively in the face of domestic and international government curbs on Internet freedom. He’s since declared himself “Minister of the Internet” and is launching the domain name “Internetministerium.de” to form a community of like-minded activists.

As the closest thing Germany has to a Web-rock star, Lobo’s reception was rivaled only by that of, naturally, David Hasselhoff. The American actor is better known in Germany for as a pop musician, was appearing courtesy of a Finnish firm. Having once claimed to be responsible for “bringing down the Berlin Wall,” something he was happy to renounce in front of the Berlin blogging community.

* A presentation about Google opened with the line, “We know what your concerns are, after all, we have all your emails…”

* Two gentlemen from the Austria-based The Bird Base and Sweden’s now-defunct Studio Total encouraged “combining activism with humor” in order to draw more attention, describing their ability to win major media coverage for pranks involving the announcement of the “world’s first sex school” and sending out EU-sponsored, and spelling-error riddled, editions of Kafka’s The Castle to hundreds of schools around Europe.

* American Jessica Marquis, author of Raising Unicorns, proclaimed “whimsy” as a key element to any creative effort (though her practiced speech, entitled “Cultivating Whimsey through Applied Unicornomics,” fell flat with the Berlin audience.) Re:publica Reader writers at work at the ePubli stand.

Among the handful of companies exhibiting during the conference, was epubli, the Holtzbrinck-owned self-publishing platform that is based in Berlin. The company hosted two dozen students from the prestigious Deutsche Journalistenschule in Munich (think Germany’s equivalent to the Columbia School of Journalism) to produce the Re:publica Reader, a daily recap in book form. Dr. Jörg Dörnemann, managing director of epubli, said that the collaboration was fruitful because it demonstrated to the students that speed-to-market was paramount in today’s fast moving media environment. Plus, “it puts them under real-time pressure to produce amid all the distractions” added Jörg Sadrozinski, director of the journalism project.

And distractions were very much in evidence. Beer was available throughout the halls (it’s not uncommon to see a Berliner strolling down the street slugging a half liter bottle of beer) and clouds of pot smoke drifted among the knots of people gathered to gaze at their phones, film each other or watch forlornly as a man tried to dance while juggling a hula hoop.

As in Austin a few years ago, beards are in evidence all over. Maybe the American hipsters have moved on from looking like lumberjacks, but it appears, the Berlin blogging community is still struggling to way to project the image that online labor is equivalent to physical “work.” That, as we know, will likely go away as the money flows into the community. For the moment, people are just looking for a reliable way to connect, be it to the Internet — few cafes in Berlin offer Internet service as they are held legally responsible for what people do online on their premises — or IRL.

If anything, one thing can be said of re:publica14 — the Internet connection was strong and free.