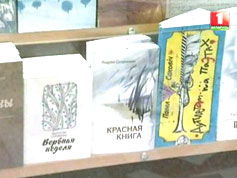 The government of Belarus is intent on supporting its “national literature” and is offering the industry some $150 million in subsidies to keep it going. A selection of titles from Mataskaya Literatura.

The government of Belarus plans to provide up to USD$150 million for the support of the national publishing industry this year, according to Lylya Ananich, Deputy Minister of Information.

This will double the sum the government committed in 2013, when it provided about USD$75 million for the support of the national publishing.

The majority of funds will be invested in modernizing printing and publishing houses, through the installation of advanced equipment, and the adoption of new technologies.

At the same time, according to Oleg Proleskovsky, Belarus’ deputy minister of information, the government will continue its active subsidization of national book publishing industry by covering up to 99% cost for the production of some types of literature, in particular books for school libraries, as well as offering publishers tax benefits.

The program is part of an ongoing initiative to support national literature. For example, a significant amount of funds will be provided to Mastatskaya Litaratura, one of Belarus’ biggest publishing houses, which runs “Zolotaya kalektsyya lіtaratury of Belarus” — a classics program that publishes the works of Vladimir Karatkevich, Maxim Tank, Ivan Shamyakin, Arkady Kuleshov, Vasil Bykov and others.

Additional funds will will be provided for the support of young authors, as well as such book publishing projects as “Our Contemporarys,” and the “Lives of Remarkable People of Belarus.”

Implementation of these projects is personally controlled by President of Belarus, Alexander Lukashenko.