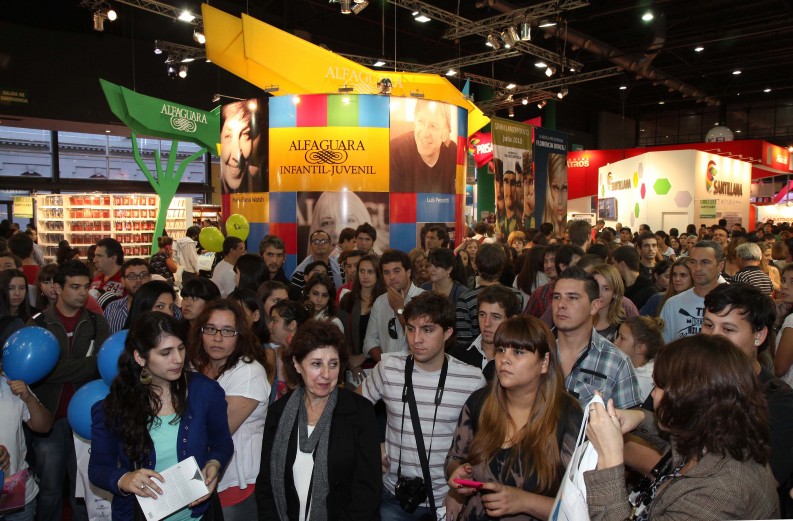 Argentina’s famed publishing industry has suffered serious setbacks due to changes in government policies, but some see opportunity despite the challenges. This past Monday saw the closing of 40th edition of the Feria Internacional del Libro in Buenos Aires. The book fair drew some 1.2 million visitors over 18 days, which included three days reserved for professional programs. The attraction is the huge scope and scale of the event: the Fair featured 45,000 sq.-meters of exhibition space, 468 exhibitors and 1,347 publishers representing 33 countries, including the United States, Israel, Brazil, South Africa, Korea, Italy, Ukraine and Japan. More than 10,000 professionals from the publishing market participated in the Fair, for business and networking.

As is well known, the Argentine economy is not having its best moment. The inconsistent policies of President Cristina Kirchner has drained the country’s financial reserves and the deleterious impact on the economy is visible everywhere. Kirchner failed to appear at the Fair’s opening ceremony and exhibitors, and others at the fair made it clear through their grumbling that Kirchner’s policies has levied a toll on the country’s publishing industry.

During the opening ceremony on April 24th, Gustavo Canevaro, president of Fundación El Libro — which administers the Fair — reported on the difficulties the sector was facing, which include a 50% increase in the price of paper, which he said impacts everyone, from small distributors to the readers. In the short term, bibliodiversity is being compromised.

The hike in the price of paper is directly related to import restrictions imposed by Ms. Kirchner’s economic team which requires that for each dollar that a company spends on imports it’s necessary that they export product equivalent to the same amount.

Fernando Zambra, director of Promage, an Argentine consultancy that tracks statistical data about the industry, told Publishing Perspectives things got much worse after import restrictions were put in place. “The imposed measures, instead of strengthening the national industry, just raised the cost of production,” he said. “The demand is much bigger than what can be offered, and the prices are rising.” He cited, for example, the serious impact on STM (scientific, technical, and medical) publishing. “Cambridge and Oxford, for example, had to begin printing their books here in Argentina,” said Zambra, which has been done through a local partner. The result is that the supply of their titles has fallen drastically.

But it’s not just the publishers who are affected. Argentina’s famous bookselling industry has also been deeply impacted and the machinations that bookshops have to go through to import books borders on the absurd. Kel bookshop, which does business under the motto is “Books in English for Everyone,” now exports grain so it can bring foreign books into the country. “Today, importing books into Argentina is really an adventure,” said Horário Villar, Kel’s account manager. What’s more, the government has now raised the taxes on imports to 35% and bookshops, at the mercy of their export partners, are required to pay the equivalent of a tithe. “For each one US dollar I export through my export partners, I receive just 90 cents back,” said Villar.

The government’s policies may have been intended to increase exports, but it hasn’t worked for those who don’t work with commodities. Exports from the book industry, for example, have fallen dramatically over the last several years. According to data published by the Argentinean Book Chamber – and confirmed by Fernando Zambra – in 2011 the book market imported US$ 117 million of products, falling to US$ 64 million in 2012 and to U$ 52 million in 2013, following the imposition of the new restrictions. Exports, on the other hand, didn’t grow as expected. In 2011, US$ 41 millions in books were exported. Exports rose slightly in 2012 — to US$ 43 million — but plummeted to just US$ 30 million in 2013.

The Argentine Market in Figures Eterna Cadencia is both a popular bookstore and publisher in Argentina

So what has the government been doing to support the book business? Well, buying books: in 2013, the Argentinean government instituted the National Reading Plan and went on the biggest book buying spree in Argentine history, spending some US$119 million dollars to buy 13 million books in order to stock libraries for every school in the country. The previous year, the total government spending on books was less than half that sum: US$47 million.

Analyzing the figures, it becomes clear that that the record government spending spree offset some of the loss incurred from the exchange rate adjustment and may have saved the year once everything is converted to US$. Of course, this was a a stopgap measure, and there is no guarantee that the government will be able to repeat the performance of 2013 in 2014.

Though Planeta and Penguin Random House dominate a significant part of the Argentinian book market, independent publishers still have a lot of firepower. “Some say that Planeta and PRH dominate more than 40% of our market. I don’t believe that. If that was true, there wouldn’t be 250 publishers making books in the last year,” said Zambra, whose Promage cross references bookstore sales with sales data direct from publishers.

Despite all the difficulties – or perhaps because of all the difficulties – at home, as well as in Spain (a major export market) the independents are now looking to expand beyond Argentina to the rest of Latin America. “Given the economic problems in Spain, I believe that we can end up stronger in the Latin American market. This is primarily true of the small and medium publishers,” said Leonora Djament, editorial director of Eterna Cadência.