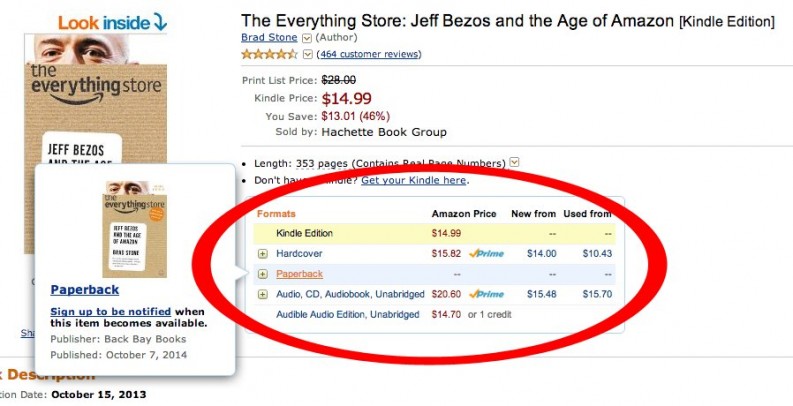 The Guardian reports that Amazon, which had appeared to be putting pressure on Hachette to come to an agreement by delaying shipment of titles and increasing prices, has taken the next logical step:

“Amazon stopped selling certain Hachette books on Friday, including JK Rowling’s latest detective novel and a new thriller offering by Adam Brookes. Other Hachette books, such as Joshua Ferris’ new novel, appeared to be for sale as usual, although under a large banner advertising ‘similar items at a lower price.’ Still others were being sold at non-competitive prices. A hardcover edition of bestselling author Jeffery Deaver’s new novel, The Skin Collector, cost $17.99 on barnesandnoble.com on Friday – and $25.20 on amazon.com.”

And at the Huffington Post, Alexis Kleinman reports that even pre-orders for Hachette titles have been affected: If you want to preorder that title in paperback, you’ll have to buy it at Barnes & Noble.

Sophie Cottrell, a spokesperson for Hachette, told Kleinman that, “We are doing everything in our power to find a solution to this difficult situation.”

And as previously reported, if it’s a Hachette title, there’s a pretty good chance that the delivery date is seriously postponed.

The Huffington Post gave as an example Stephen Colbert’s book America Again: Re-Becoming the Greatness We Never Weren’t. Barnes and Noble says that the title will “usually ship within 24 hours” while offering same delivery in Manhattan. Amazon says that the book will take “2 to 5 weeks” to ship.