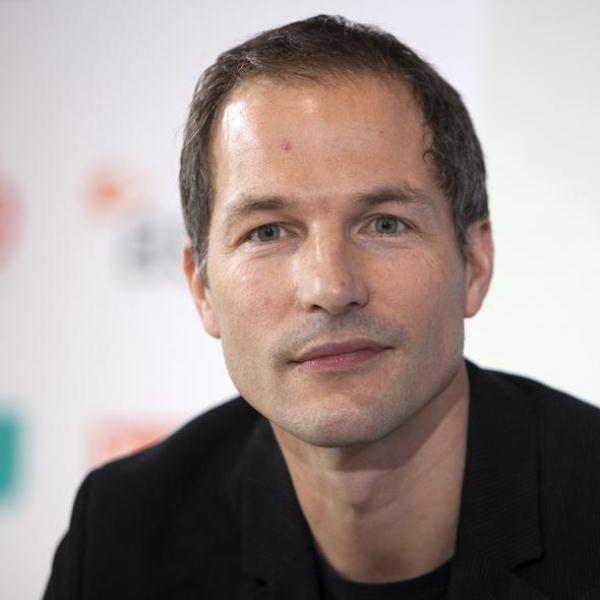 Maxim Leo’s bestselling memoir “Red Love” won the European Book Prize in 2011, but it took the commitment of a small publisher to bring it to English-speakers.

It’s not easy for a German author to get translated into English, let alone get his book recognized in America, but this one did: Maxim Leo’s memoir, Red Love was published by Pushkin Press, and embraced at the PEN World Voices Festival in New York earlier this month, where Maxim Leo spoke before packed audiences (one woman told him she missed her subway because she was so enamored with the book).

So, how did that happen? Red Love — originally titled “Haltet Euer Herz bereit” (“Make sure you’re heart is ready”) — got raving reviews and stellar sales when it came out in Germany. Leo, a journalist in his mid-forties, born and raised in East Berlin, writes about his family, but the book is much rather a mirror of 20th century Europe. Leo’s grandfather Gerhard was a secular Jew who fled the Nazis to France, fought for the Resistance, and returned East Berlin after World War II, when the GDR was founded. Werner, his other, more distant, grandfather, was a member of the Nazi party. He was captured in France and returned to East Berlin as well. He also became a member of the Communist party. Their children, his parents, were Anne, a staunch defender of the GDR (her own grandfather, Dagobert Lubinski, was also a Communist, and a Jew) and her husband Wolf, Werner’s son, an artist critical of the Communist system. Leo had an upbringing differently from most children in the East; due to his family’s closeness with the Communist party he could go to the West. Nevertheless, he was happy when the Wall fell and the GDR vanished for good, while his mother cried.

Given that epic story, the interest of Americans, and especially New Yorkers, is not surprising, given the success of The Lives of Others, the movie that introduced the Stasi to America, and Anna Funder’s Stasiland. Despite not being released by one of the “Big Five,” the book has been reviewed by The New York Times (and subsequently in The New York Daily News and the Minneapolis Star Tribune, proving, once again, the importance of The Times as a trailblazer). The Times, Leo says, was interested in the family’s half-Jewish background. Leo was also interviewed by NPR. However, it was a long way that started five years ago. The memoir was first published in Germany in 2009. What jumpstarted the international success was its winning the European Book Prize in 2011. “Red Love was sold to Finland, South Korea, Sweden, and, also, France,” says Leo. South Koreans are interested in everything about the Wall, he says, and the French were interested in a story involving the Resistance as well as the GDR. Soon after, Pushkin Press became aware of the book. Pushkin, founded by a Dutch woman to promote literary translations, is based in London. Since 2012, the press is run by Stephanie Seegmuller, who originates from France and Adam Freudenheim, an American who came to the company from Penguin.

It was Seegmuller who took notice of the book after it won the Book Prize, but also because of the French edition and its “very nice cover,” Seegmuller says. In addition, she was born in Alsace, the German speaking part of France, and she is interested in German history. She loved the book right away. “It has a unusual, different approach to the genre. Memoirs are often whiny and self-obsessed. Red Love is neither; it is very moving how Maxim is investigating his own family, he is so honest. This makes it universally interesting. And of course, the writing is great,” she says. Leo has worked with the French translator, his wife is French, and he spent time in France. He was not involved in the English version, though.

It is especially remarkable that the book has been snatched up by tiny Pushkin, given the fact that Leo’s German publisher is Karl Blessing Verlag, a subsidiary of Random House. Even more remarkable, Pushkin is running its line-up from London, with the help of a New York-based publicist. “We are still experimenting and trying to figure out the best sales strategy in America,” Seegmuller says. She knows that the U.S. market is difficult. “There is still a mental block, but we prove that it can be done.” For a two-person company running their operation from the other side of the Atlantic, it is quite an accomplishment best some of Pushkin’s bigger competitors.

The Challenge of Sales and Distribution

However, the commercial success in the English-language world is still lagging behind sales in Germany or elsewhere. This may be attributable to the fact that the memoir is only available in a limited number of stores; despite The New York Times-review, the Barnes and Noble on Union Square is one of the few New York book stores carrying it (Leo, who strolled the streets during the PEN World Festival, found the dearth of bookstores in New York “shocking”). This might change. Pushkin will be signing up with Random House distribution, as Melville House, another small-to-midsize publisher specialized in European literary fiction already has.

So, here is the magic formula for aspiring German authors: write a great book with an epic, interesting topic as well as with a personal angle, have it picked up by a mainstream German publisher who can turn it into a success, get a major book prize, have the book translated into as many languages as possible, and then cross your fingers that you’re discovered by an English-language house. The size of the latter does not matter, much more important is the determination of its editors and their knowledge of the literary world. Random House distribution helps, though. And, of course, don’t forget to get your book reviewed by The New York Times!

What did Maxim Leo take away from his New York visit? “I found it very moving when that woman in the audience said that she missed the subway because of my book,” he says, “This is what you’re living for as an author.” During this first reading at the Goethe Institute, he was also asked whether his family has read the manuscript, and has approved of the book. Yes, his parents had read it beforehand, but he would not have allowed them to rewrite it completely. “Only if they’ve found one little thing [I would change it].” But they didn’t. There is one more thing he found touching: “When our extended family met in Berlin some time ago, everybody came from somewhere else — England, America, Israel, Germany, France,” Leo says. “And at one point, I looked around and realized, everybody here can be traced back to Berlin. This is where we all come from.”

Eva C. Schweitzer is a writer and correspondent based in New York writing for German media. She runs Berlinica Publishing, a company that brings Berlin books to America.