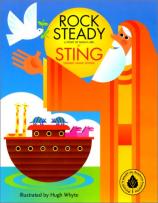 At the Observer, Tom Lamont (a writer and commissioning editor for the Observer) and Robert Muchamore (author of the best-selling Cherub series of books, and of Henderson’s Boys) sat down to discuss a very important topic: Should celebrities stop writing children’s books?

Some of the highlights:

“A celebrity – Kylie, Sting – announces his or her intention to write for children, and I instinctively feel for the career-pledged writers who have been huffing away with their thesaurus and watercolour brushes for years. Beneath them, the hopefuls with worthwhile manuscripts hustle for interest…And, uh, oh, here’s another celebrity, lolloping into the game. They’ve noodled out an idea on a Groucho Club napkin. Their agent has swiveled at the bar to arrange a six-figure deal. The published result, you can bet, will absorb more than its share of publicity budgets, review space, shelf space.

“Given the subject under discussion, I’ll express this in short sentences. Stop it, celebrities. Go away, celebrities. “When it comes to petty jealousy, David Walliams pushes all my buttons. He started doff making a heap of money out of puke jokes and dressing up as a woman…then he starts writing children’s books, tops the charts, and now sells way more books than I do. I’ve never met him, but I’m convinced he moved into children’s fiction exclusively to annoy me.

“But when the green mist clears, I reluctantly realize that I have no more right to tell Mr. Walliams whether or not he can write children’s books than I had to enact my fantasy to drop a studio light on his dead during Sport Relief.

“And let us not forget: publishing is not just about authors, it’s a huge industry. Successful books pay the wages of editors, agents, printers, lorry drivers and book sellers – and, of course, in the case of the vast majority of celebrity books, the person who actually writes them.”

“I imagine the thinking goes: ‘I’m a bloody brilliant singer/comedian/model/footballer/royal. Look at my shelf of Brits and Baftas and Elle Style Awards and Coca-Cola Cups. Everyone chuckles at my jokes and quivers at my meaningful statements. I can get an invite on to Allan Carr: Chatty Man whenever I want. Why haven’t I written a really good children’s book?

“But a really good book is hard to write. And even a shit book takes ages. Now, a children’s book…

“How many words are there in Goodnight Moon? A hundred? It’s seen as easy work, a short cut to reputation-padding bibliography. And this is offensive (isn’t it?) to the children’s authors who devote themselves to writing for developing minds; who agonize; who know that, actually, those 100 words of Goodnight Moon are just perfect.”

“Real authors like me have little to fear! Celebrity status may get your foot in the publisher’s door, but you won’t get a kid past chapter one if your story doesn’t cut the mustard.”

Read the discussion in its entirety here.