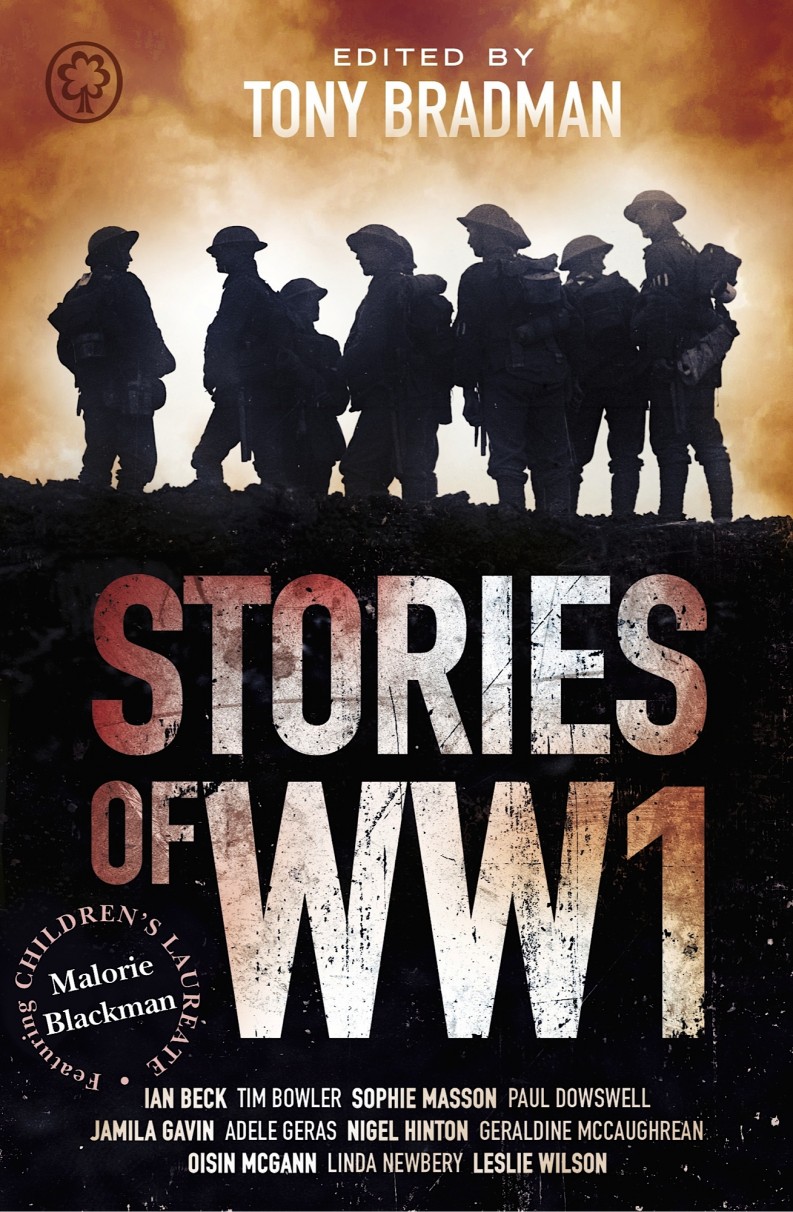 This year marks the 100th anniversary of the start of World War I, and with that has come a flurry of new books examining “The Great War,” including Christopher Clark’s The Sleepwalkers (HarperCollins), Max Hastings’ Catastrophe 1914: Europe Goes to War (Knopf) and Charles Emmerson’s 1913: In Search of the World Before the Great War (Public Affairs). But to my mind, one of the most interesting books to come out about the war is aimed at a young adult audience: Stories of WW1 (Hachette Children’s Books).

Compiled by Tony Bradman, this collection of short stories chronicles the events of World War One – imagining the conflicts and emotions of those people caught up in the war and its aftermath. With stories from Malorie Blackman, Geraldine McCaughrean and Oisin McGann, among others, it is very much worth reading.

The following is Mr. Bradman’s introduction to the book, which talks about what World War I meant to him growing up, and what inspired him to put the collection together: I only really became properly aware of The First World War when I went into the Sixth Form of my south London grammar school, way back in the early 1970s. I had chosen to do English Literature as one of my three A levels, and found myself studying the poetry of Wilfred Owen. I was soon totally gripped by his work, the tiny number of beautifully written, deeply felt poems about his experiences as a young officer that he had managed to complete before he was killed in action a week before the war ended.

Reading them made me want to find out more about him, and about the war itself. So I read whatever I could find – the poems of Siegfried Sassoon, for example, and the great memoirs of the war, Sassoon’s own Memoirs of an Infantry Officer, and Goodbye to All That by Robert Graves, both of whom knew Owen. I read lots of history books too, and learned what a wasteful conflict the war had been. It began in 1914 and lasted over four years, during which eight and a half million soldiers died, almost one million of them from Britain and its then empire. There was fighting in many parts of the world, but it was the horror of trench warfare in France and Belgium that captured my imagination – the slaughter of thousands of young men for a few yards of bomb-blasted mud.

After a while I began to realize that I’d known about the war all along, but hadn’t taken much notice of it. In the entrance hall of my school there was a board bearing the names of former pupils who had died in the war, and it was quite a list. There was a local war memorial too, a tall obelisk of white stone with a much longer list of names carved on it. Every year on the nearest Sunday to November 11th – the day on which the war ended in 1918 – wreaths were placed around the memorial. And whenever November 11th itself fell on a week-day, we would have a special school assembly with a full two-minute silence, so we could remember ‘those who had given their lives for their country.’

From then on, I noticed war memorials in many places. I played rugby for my school, and saw memorials in the entrance halls of the schools we visited. There were memorials in other London suburbs, on the sides of office buildings and factories, in stations and in parks. Many were similar white obelisks, but some were big and dramatic and included statues of soldiers. In later years, I discovered that there are memorials everywhere in these islands – in every village and town and suburb, in the centre of every city. It is almost as if a silent army of ghosts haunts the land which they left and never returned to in life. But with so many dead in such a short time, how could it be otherwise?

Of course, when I first started reading Wilfred Owen’s poetry, many of the soldiers who had fought in the war were still alive, elderly men in their 70s and 80s. They have all gone now, but most families still have stories about great-grandfathers who fought in the trenches, great-uncles who were killed, others who returned maimed or disabled for life, either physically or mentally. The First World War – or as it was called at the time, The Great War – runs like a scar through all of us. In many ways it made this country what it is today, and that is why we should always remember it. That’s the point of all the war memorials, of all the Remembrance Day services, of all those poppies we buy.

Yet for me the best way to remember the war is through the words of writers. This is something Wilfred Own himself recognized. He wrote that ‘true poets must be truthful’, and by this I think he meant that the truth of what happened is to be found in the poems and stories written about it. That’s where you’ll find an understanding of the impact of the war on the people who lived through it, and who came after. And that’s why I came up with the idea for this anthology of short stories. I thought there couldn’t be a better way for today’s young readers to find out about the war than by putting a collection of great stories in your hands, especially as it’s being published in this centenary year.

I wanted this book to cover as wide a range as possible, which is why you’ll find stories set in very different places. There are stories about young men in the trenches, of course, but also about the people they left behind, and about what happened to them and their families because of their experiences. There are stories about the impact of the war on children, in this country and in France and Belgium and Germany. There are stories about soldiers from Britain’s empire who fought in the war, young men from Ireland, India and Australia. There is sadness and pain and suffering in these stories, but there is hope too, and I have a feeling that if Wilfred Owen himself could read them, he would approve.

Tony Bradman has been involved in the world of children’s books for nearly 35 years as a poet, a writer of picture books and fiction for children of all ages. He has edited many anthologies of short stories and poetry, and reviews children’s books regularly. Tony lives with his wife in London, England.