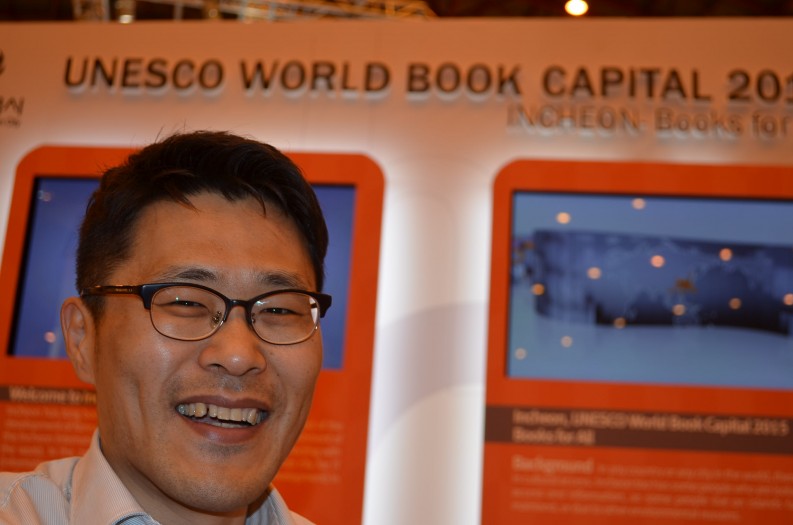 Among several plans to promote literature, South Korea hopes to send children’s books to the North as part of Incheon’s turn as UNESCO World Book Capital 2015.

The unfolding South Korean ferry tragedy has cast a pall over Incheon’s plans to celebrate its status as UNESCO World Book Capital 2015.  The ferry was traveling from Incheon Port to the southern resort island of Jeju. At the London Book Fair, where Korea was Market Focus, many of the proposed schemes for the year-long accolade were on display.

South Korea plans to send children’s books to the North as part of Incheon’s celebrations as UNESCO World Book Capital 2015. Speaking at the London Book Fair last week, Seung-Hyun Moon, Secretary General of the Asia Pacific Publishers Association, said: “Incheon is very close to the border and includes many islands, one of which – Yeonpyeong – was bombarded by the North last year and has become a symbol of the divided Korean peninsula.  Now we want Incheon province to be a symbol of peace and harmony. We want to show that books can overcome the boundaries between North and South.”

Moon hopes the UNESCO World Book Capital accolade will mark a turning point for Korean publishing. The celebrations officially begin on April 23, the date of Shakespeare’s death which is World Book Day in Europe and the US. It takes up the mantle from the existing holders, Port Harcourt, Nigeria on that date. “In the past we haven’t made much of World Book Day in Korea, partly because we have another day which celebrates the completion of the tripitaka Buddhist woodblocks. But we want to make much more of it next year.”

Among new initiatives planned are the building of Korea’s first dedicated library for the disabled and the giving away of ebooks via smart codes on places like bus shelters. There will also be a book recommendation “relay” – a kind of ‘reading’ version of “pay it forward” – as well as a campaign to save bookstores in Badari, Incheon. There will also be education initiatives to encourage people to become closer to books and to highlight their civilising qualities – the organizers are calling it ‘reading and healing’. There are plans too, to encourage grandparents to read to their grandchildren. “We want it to be a huge celebration of books throughout Incheon,” says Moon.

“We tried to send Harry Potter to the North, but that title is too Western.”

The plan is for Incheon to become a “Reading City,” and for this cultural outreach to spread right across the province. The wider Incheon area has many people who live on islands and thus don’t have the cultural access that their city counterparts too. UNESCO World Book Capital has already launched a mobile library scheme visiting each island, and has developed a mobile app that enables the 2.9m citizens of Incheon to get access to an online library via their smartphone.

Incheon has 47 public libraries, 169 community libraries and 23 “smart” libraries, and it sees the World Book Capital scheme as making Incheon ‘a central city for international cultural exchange via books.'” For some years, Incheon has been seen as another example of Korea’s rise on the world stage, opening its port to the wider world some years ago and being designated Korea’s first free economic zone in 2003. The 17the Asian Games are being held in the city in September and with the completion of Incheon International Airport it is now a major hub for North East Asia.

The organizers very much see the UNESCO World Book Capital title as another plank in Incheon’s rise on the world stage, and that the city will continue contributing to the global community even after its year of celebration is over.

But Moon adds a dose of realism. “At the moment, we would not be able to send books to the North, because there are some tensions with the recent military exercises. However, we hope that by next year the situation will be different. Also, children’s books are neutral.”

Some years ago, the Korean agent Sue Yang of the Eric Yang Agency, looked in to sending copies of Harry Potter to the North, but it proved too difficult. “That title is too western,” Moon said. “But we have lots of folk tales in the South which we can send. We have a common cultural heritage with the North, and we hope that books can help overcome obstacles.”

Our thoughts are with those families affected by the ferry disaster. The city will almost certainly hold a minute’s silence for them in coming weeks. Books may indeed be part of the healing process.