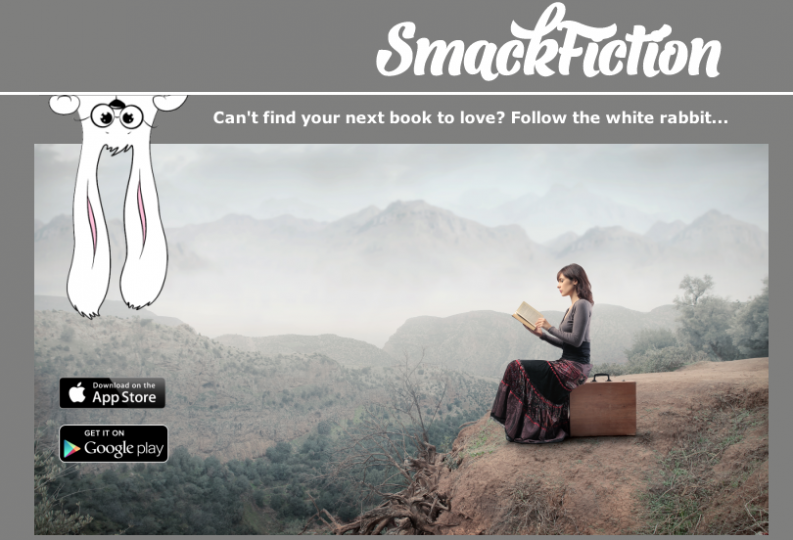 Lisa Buchan of SmackFiction explains the process of building and piloting a new app for Young Adult and New Adult book discovery in New Zealand and Australia.

With declining numbers of book shops, the growing power of Amazon, and the increasing importance of friend recommendations for book purchases, new methods of book discovery are needed.  We have now completed two experiments – the first (Vangelizer – see my previous article) was to assist discovery of individual books with an app that travels through social media. The second, SmackFiction, has just finished a pilot across New Zealand and Australia, with supportive publishers from all parts of the English speaking world providing content and samples.

SmackFiction’s aim is to increase reading activity and improve discovery of books with a mobile app. Publishers told us that the hardest markets to reach were Young Adults and New Adults, because their traditional promotional activities completely missed this group. We ran a series of focus groups with 15-25 year olds to find out how we could motivate this group to download an app and then keep using it. The readers told us they would like to find good books to read, and were frustrated that it was so hard to find them. They said if they could find more really good books, they would read more. When we asked what activities such reading would be displacing, they told us mostly games and TV series watching and in a few cases, FanFic reading and writing. Although they all spent time on Facebook’s mobile app, they tended to “get to the end of the feed” after 30-60 minutes, when they would drift off to other activities.

When we asked why it was so hard to find a good book to read, the main reasons they gave were that book shops and libraries did not have a wide enough selection, and it was hard to find blogs or trusted book review sources with reviews targeted to their needs.  Most of the group were aware of Wattpad (mostly as a FanFic venue) and some of them used Goodreads, but they had little trust in the Goodreads’ member reviews.

These insights gave us the first part of our value proposition for SmackFiction – we would provide reviews and samples for new releases, as well as “love notes” about our favorite bestsellers and classics in a feed format.  The second part of our value proposition was that our reviewers would be the same demographic that we were trying to reach. We got excellent feedback from our target audience on our snappy reviews, so this part worked well. Kudos to our twenty-something review writers Camilla Brown and Katie Sherriff.

We aimed all of our promotion and advertising at 13-25 year olds, and encouraged New Zealand school and public libraries to promote us with posters and bookmarks, as well as using Facebook and Google promotional advertising.  On Facebook we paid between 40-60 cents to get a reader to download the SmackFiction app (we improved this rate significantly during the pilot). When we used Google, the cost increased to more than $1.30 per download, despite a lower initial click cost. The libraries were an even more expensive channel, but because they distributed physical items like bookmarks for us, they may have created brand recognition and driven discovery of our website through search.  Over 150 people scanned the QR codes on bookmarks and posters sent to libraries, from around 6,000 distributed.

During the five month trial, the overall average number of actions (views of book detail pages, books sampled, etc) per user was 22, which meant the reader would have skimmed over 240 items on average.  The marginal activity cost (cost of acquisition divided by number of actions) was 2 cents per action. Compared to our Vangelizer experience, this is a much more sustainable marketing outlay, especially if editorial costs are spread over a wider group of users and books than our pilot.

Although cost of acquisition was good, we ran out of development runway to create the elements that would get word of mouth promotion of the app (such as connecting to friends through the mobile contacts list). The impact of this gap was to instantly lose those readers who were more socially oriented.  About half of all new readers who registered looked at the ‘friends’ page first, and when they didn’t see anyone they knew,  took no further action. This corresponds to the focus group feedback – a big group of readers just wanted to read what their friends were reading (and 80% of the time this was fantasy). Improving the social experience would likely have improved our return rates for readers.

Around 15% of the readers were boys – which surprised us since none of our advertisements targeted boys (the pic shows one of our top performing advertisements). Librarians told us that they had high hopes for our app, because boys were not as comfortable carrying books around as the girls were.  Nearly all the girls were adamant that they preferred a printed book to read and many school students took great pride in their book collections at home, but we did not have time to research whether there was more of a preference for e-books versus printed book collections by the boys.

We asked our readers: “What were the last 5 books you read?” Eighty percent of these books were fantasy/science fiction of one kind or another. We tried to ensure that our feed matched this ratio, leavened by a few interesting bestsellers or local books. Interestingly the feedback from readers was that they liked our feed giving them reviews of interesting non-fantasy books, and said this had encouraged them to read more widely. They also said they had been reading more since interacting with our app (this was a relief since this was what one of our sponsors funded us to achieve).

The SmackFiction app is only available in the Australia and New Zealand App Store, so the audience was mostly from these regions, although an amusing number of readers invented names and residential cities. We had a high proportion of new releases from Australian and New Zealand publishers (with a sprinkling from Canada, the UK, US and South Africa), but readers did not appear to be more interested in fantasy with a “local twist”.  The one exception to this we noticed was when a reader was Māori or Pasifika, in which case there was more interest in fantasy books with a link to Māori and Pasifika folklore.

Search engine optimization (or SEO as it is known in Marketing circles) assumes readers search for books using Google (which often throws up Amazon search results). Our focus group participants were adamant that they do not discover books this way. Nor do they use the Amazon and other retailer “if you like this, then you might like that…” algorithm machines. Almost all the members of our focus groups found their books (prior to SmackFiction!) through friends – including global friends they had met in sites like Mugglenet Interactive (MNI) or other “fanfic” zones.  One surprisingly high source of book recommendations were older female relatives (for girls), including mothers, aunts and older sisters.  Other key sources were libraries and bookshops – especially specialty bookshops that carried higher than usual numbers of Young Adult and Fantasy books.

Once a title became “known” (usually when it had already hit the bestseller lists or readers had received several strong recommendations), our readers said they would search for it by going directly to their favorite online retailer, which was usually Book Depository. The school students said they would compare prices, while the older students and working New Adults tended to settle on a retailer that met their price and convenience needs (again usually Book Depository), but both groups would still buy books from bookshops occasionally.

A mobile app has one serious disadvantage in a connected world – and that is poor content discovery. Our witty reviews could have been much more widely read if they had been discoverable on the internet. We had built an architecture that allowed such sharing, but again, ran out of time (and funds) to enable it. We knew from our Vangelizer experience that with the right incentive, people will message a friend with a link. This could have helped with spreading the app more widely.

Some publishers we spoke to assumed we would be able to cover our costs with affiliate fees from online retailers. Alas, Amazon does not pay affiliate fees to mobile app providers. Apple encourages affiliate mobile apps, but since our audience were not big e-book buyers, we made only 35 sales through Apple ($15 commission). We promoted local internet retailers from New Zealand and Australia, but they attracted little interest from readers. Advertising (of things other than books) on the app was given a big thumbs down in focus group sessions, but further testing could be done to see whether readers would pay to be rid of advertising.

Our stats showed that for every 100 actions, a purchase was generated. We could not definitively confirm this for Amazon purchases, since there were no affiliate reports, but it held for the retailers that we did have affiliate reports for.  This means that for publishers, a cross-publisher app like SmackFiction is a potentially viable marketing channel, since at 2c per action, the average cost of sale for a book would be $2.00. There are a few provisos however – the first is that the selection needs to be from all publishers – our readers noticed gaps in the catalogue, and would sometimes do a test search to make sure we had their favorite books on the app before they would continue to use it. The second proviso is that better books are going to beat the averages, and poor books are going to have higher costs and lower sales. There is nothing about an app that can change this dynamic.

We were grateful to have support and samples from Harper Collins New Zealand (unwavering in their support despite drastic personnel cuts during the period of our pilot), as well as samples from Wakefield Press, Scholastic NZ, Penguin NZ, Fierce Ink, Steam Press, Huia, Gecko Press, Victoria University Press, Permuted Press,  Hannacroix Creek, Dragonfall Press, Legend Press, Turquoise Books, Snow Books, Untreed Reads, Silver Knight Press, Really Blue Books, Not So Noble, Zharmae, and Dzanc. Working with publishers was one of the great joys of the project for our team – “such nice people!” everyone said. The same goes for all the wonderful librarians who enthusiastically supported us.

We had government funding from Creative New Zealand as a means to expand the reading community in New Zealand. We were exceedingly grateful for this, as it meant we reached a much wider group than would otherwise have been possible on our shoestring budget. We reached over 500,000 Facebook users between the ages of 13-25, and over 4,500 readers liked the idea of a new way to find a good book and clicked to download our app.

Any organizations interested in the SmackFiction app should get in touch with me; lisa@smackfiction.com as we are currently considering our next steps. If you live outside Australia or NZ, or don’t have an iPhone, you can register and see the app here (best with a tablet or smart phone as it is designed for touch screens); http://mobile.smackfiction.com.