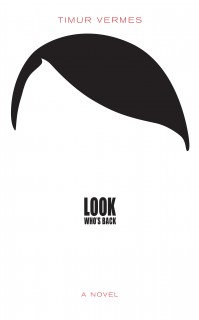 Writing in Time Magazine, Kharunya Paramaguru asks: “What would happen if Adolf Hitler woke up in modern-day Berlin to find that it was not occupied by Russian soldiers but instead by a vibrant, multicultural citizenry? This is the premise of the debut novel by German journalist Timur Vermes, Er Ist Wider Da (He’s Back) (Eichborn Verlag), which has topped Germany’s best-seller list.

The novel is narrated by Hitler, and follows him as he emerges from a 66- year sleep in his bunker underneath Berlin to find an entirely changed Germany. “In the celebrity-obsessed modern-day city, everyone assumes the fulminating leader of the Nazi party is a comedian in character – and soon he becomes a celebrity with a guest slot on a Turkish-born comedian’s TV show. His bigoted rants are interpreted as a satirical exposure of prejudice, leading him to decide to start his own political party.”

And now the book, which sold 1.4 million copies in Germany, is being published in English in the UK as Look Who’s Back. (April 3, 2014, MacLehouse Press)

At the Guardian, Phillip Oltermann notes that German critics were “underwhelmed” buy the book. The newsweekly Stern described it as the “latest outgrowth of a Hitler commercialization machine that breaks all taboos to make money,” although a critic at Hamburger Abendblatt saw it as a “successful if unsettling satire of a mass murderer and the mass media.”

In addition, according to the Guardian, “Some argued the novel ‘trivialized’ the dictator’s crimes by making the reader laugh not at, but also with him. Others felt the satire just didn’t bite enough: ‘A mediocre joke that suddenly got successful,” in the words of author and critic Daniel Erk.

Vermes, a 47-year old former ghostwriter with a German mother and a Hungarian father, ignores the criticisms. “Books don’t have to educate or turn people into better human beings – they can also just ask question. If mine makes some readers realize that dictator’s aren’t necessarily instantly recognizable as such, then I consider it a success.”

He told Oltermann that before writing the book he had “a curtailed idea of who Hitler was…There is this ‘instant Hitler’ most people know, who is a bit like instant coffee, very one-dimensional.” So in search of a more “real” Hitler, he read Mein Kampf for the first time. “It’s written in the style of someone who doesn’t normally write: pompous and sniveling, lots of animal metaphors. If one word would do but Hitler knows three, he will use all three.”

But at the same time, he says, the book was dangerous because “it’s not full of mad ideas.” “Some of it is fairly commonsensical. Take Hitler’s thoughts on housing: he says young people need houses, so the state should build more houses. We can’t declare that wrong simply because it was Hitler who said it.”

And so, as Oltermann notes, “Vermes’s modern Hitler, too, doesn’t only spout repellant ideas that would instantly alienate the reader. On the one hand, he rails against parliamentary press freedom, and rejoices at the fact that 65 years after the end of the war, Germany’s Jewish population is still only a fifth of what it was in 1933. But on the other, his complaints about hunting, food scandals, and drivers racing through inner-city areas would fit perfectly into any modern party manifesto.” “That’s why so many readers thought my Hitler was too real: he was too normal,” Vermes said.

And perhaps not surprisingly, Vermes observed that the younger the reader (or the reader furthest away from Hitler), the more they enjoyed the book. His mother, on the other hand, born in 1942, didn’t get the joke. “’But that’s what Hitler was like,’ she said.

Oltermann says that “Sometimes it feels like Vermes may have studied the ponderous style of his protagonist’s memoir a bit too closely; for a comic novel, the opening chapters of Look Who’s Back in particular can be a bit of a slog.

And yet there’s no question that the novel has hit upon the key paradox of our modern obsession with Hitler. In spite of his current ubiquity – in the media, in advertising, in film and in comedy – we are perhaps further than ever from understanding what he was like as a real human being, or how he was able to lead the German people to participate in the historic crime of the Holocaust.”

For his part, Vermes told Jason Steger at Australia’s The Age that the way Hitler is seen today has very little connection with the real one.

“We have the bad Hitler, the monster, the funny Hitler; that is our Hitler now. But no one knows how this man could be so fascinating. Most people wouldn’t think it possible that if they would have lived back then they would thought he was in some way attractive too.”

But as Steger says, “The book can be uncomfortable. The reader is in Hitler’s head and force to some extent to emphasize with him as he negotiates a world that is entirely new to him.

“It is undoubtedly comic and a sharp satire of the media, but then you wonder whether you should be laughing. And are you laughing at or with him?”