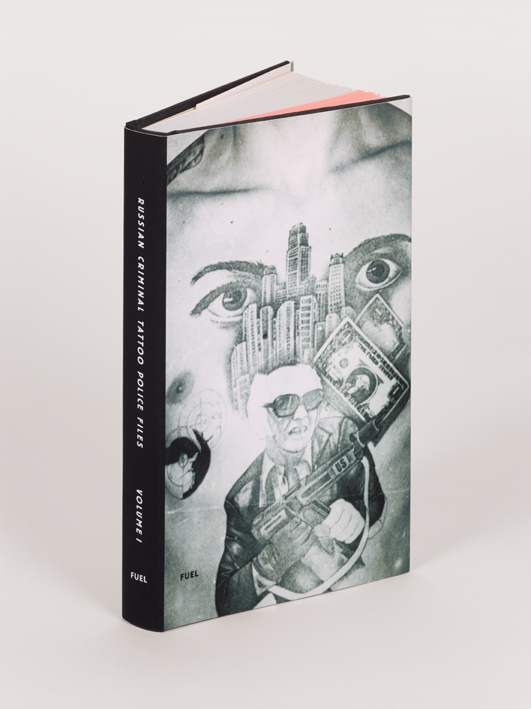 Design studio turned publisher FUEL made a splash in 2004 with the publication of their first book The Russian Criminal Tattoo Encyclopaedia. Since then London-based principals Damon Murray and Stephen Sorrell have built up an extremely eclectic list that includes books by the artists Jake and Dinos Chapman, a photographic catalogue of home-made tools from Eastern Europe and an anthology of images from the cult blog Bibliodyssey. For their latest project, Russian Criminal Tattoo Police Files, they have returned to Russia, crooks and bizarre etchings on skin, but with a new twist: they are using Kickstarter to raise funds and drive awareness of a larger tattoo-themed project. Publishing Perspectives spoke to Damon Murray to find out more:

“The name FUEL reflected our energy and drive to produce work,” says Murray as he explains how he and partner Stephen Sorrell set out on the path that would lead to their becoming publishers. Having first met in 1988 as students at Central St Martins’ College of Art in London, they continued their studies at the Royal College of Art but found that they were bored by college projects. And so with two other students they started a magazine of their own, named FUEL.

“Each theme of the magazine had a four letter word title – GIRL, HYPE, CASH, DEAD,” explains Murray. “Working on our own publication gave us space to experiment in a way that was impossible when working for a client, this made for work that was not necessarily pretty, or straightforward to understand. We were the antithesis of the majority of the design groups of the time.”

On the other hand there were drawbacks to this freedom- Murray admits that by the time he and Sorrell graduated they were “unemployable.” Undaunted, they set up their own design studio, which took the name of their magazine. The transition to publishing books followed naturally, says Murray- working for clients in the worlds of fashion and art, he and Sorrell gained a lot of experience working with print, and they had continued to produce their own magazines and books. “Over time we realized that with many of the book projects we were undertaking, we were doing everything: finding the content; arranging rights; sorting contracts; scanning images; commissioning and editing text; designing the book; overseeing the print… We decided it was time for us to have the courage of our convictions and become publishers. Once the logistics of distribution had been taken care of, it was not such a big step to take.”

Murray says that as designers he and Sorrell had “regularly” come across content that they felt “deserved to be published.” One such project was that very first book which they issued in 2004 The Russian Criminal Tattoo Encyclopaedia Volume I. The Encyclopaedia collected hand-drawn documentary illustrations of tattoos by Danzig Baldaev, a Soviet era prison guard who had grown up in an orphanage for children of enemies of the state before spending decades working in the country’s penal system. Fascinated by the imagery and complex symbolism of Russian criminal tattoos he recorded them in a style that may recall for Western readers the works of underground cartoonist Robert Crumb, although Baldaev’s work is entirely without humor, and rather represents a sustained gazing into the abyss carried out over many years. Murray says that he and Sorrell were first shown Baldaev’s drawings “about ten years ago” by a friend in St. Petersburg. “We’d never seen anything like them and immediately recognized their potential as a publication. We wanted to bring this language to a wider audience, and to give both Baldaev-who drew the tattoos- and [Sergei] Vasiliev- who photographed them- the recognition they deserve.”

Murray and Sorrel approached the material methodically, presenting the drawings simply, one per page, “…so that the reader could contemplate them both as works of art and as historical documents in their own right. This formal ‘encyclopaedic’ presentation of the content made it all the more disturbing, but also allowed the viewer to comprehend a language that was at first glance random.”

Murray describes response to the book as “fantastic.” Indeed, FUEL followed up with Volume II (2006) and Volume III (2008). Demand is such that the volumes have been reprinted, and adds Murray “the audience continues to grow as people discover this phenomenon.” So why does Murray think the books have been so successful?

“Today the practice of tattooing is ubiquitous,” he explains. “We see it on everyone and everything: from pop-stars to footballers, t-shirts to handbags… it is almost more unusual for someone not to have a tattoo.” Russian criminal tattoos are different, however: “These tattoos have real meaning – so much so that if a prisoner couldn’t ‘stand by his tattoos’ he would have to remove them using glass or a brick, or face the consequences. In this context tattoos denoted power or submission: they we literally a matter of life or death. To read these books is to venture into an unimaginable world. I think this is what fascinates people about this subject.”

This early success enabled FUEL to be taken seriously as a publisher, says Murray, and he and Sorrell were free “to consider titles that other publishers might have turned down.” Russia has been a recurring theme, and in addition to the tattoo-themed books and a collection of drawings from the Gulag also by Baldaev, Murray and Sorrell published Notes from Russia- an extraordinary compilation of ephemeral hand-written signs and notices that were posted on lamp posts and mail boxes and apartment entryways in Russia in the 1990s. These messages from invisible authors promised jobs, quick fortunes, magical cures or even the gospels of new messiahs. Illuminated by a witty text from critic Alexei Plutser-Sarno, Notes from Russia captures an aspect of Russian culture that was as ubiquitous as it was invisible to most journalists, commentators and historians.

Murray says that his fascination with Russia began in 1992, when he and Sorrell visited the country just after the collapse of the Soviet Union. “We’ve been lucky enough to happen across some interesting aspects of Russian culture that may well have disappeared if they had not been documented in our publications. It’s amazing that we are constantly looking for new subject matter in Russia – and still finding it. The gap between the cultures is wide. From our perspective being outside of a culture, not understanding and misunderstanding, is an interesting position that has proved rewarding.”

And now FUEL publishing has returned to its roots with Russian Criminal Tattoo Police Files, although Murray is careful to stress that this latest project is no mere rehash of the Baldaev books. Police Files instead collects images collated by Arkady Bronnikov, a Soviet police officer who never had any contact with the authors and contributors to the Encyclopaedia series; rather his photographs were used by the Soviet police for the purposes of identifying the meaning of the criminal tattoos, and were thus entirely functional. Nevertheless, says Murray, Bronnikov’s photographs provide an “unprecedented” view into the lives of criminals not only through their tattoos but also in the “way subjects hold themselves before the camera” expressing for instance their “submissive or defiant” attitudes.

Still, in spite of FUEL’s success, Murray frankly admits that it’s “very difficult” to make money from publishing, “particularly with such an esoteric list as ours”- hence the decision to use Kickstarter for Russian Criminal Tattoo Police Files. The fundraising drive is intended partly to cover the print costs, and “partly to raise awareness of the project as a whole.”

Murray continues: “In effect we are pre-selling copies of the book through Kickstarter. Because people know we produce high-quality books (the Encyclopaedia being a good example of this), our track record means that the audience understands the book will be to the same high standards, and will fit in perfectly with their existing Russian Criminal Tattoo Encyclopaedia collections- as well as hopefully finding a new audience.”

As to the “project as a whole” side of the drive, Murray explains that part of FUEL’s own site is dedicated to the popular online Russian Criminal Tattoo Archive. “We want to make this section of our website the destination for information about Russian Criminal Tattoos (we have already posted exclusive films and other content here and will be posting more in the near future). We hope that with a combination of the Kickstarter project and the flow of traffic to our site, we will be able to sell enough books to make the project viable.

“It’s an attempt to make these books work in a different way, so instead of coming across them in a bookstore, or buying from Amazon, the reader can buy from a very particular and specialized environment, which has been curated by experts in the field.”

So has FUEL received any criticism from angry lone wolf artists who think Kickstarter is not for established publishers?

“No! We don’t really view ourselves as ‘established’ publishers…We are a very small – two people – design and publishing company. Perhaps people have a perception of us as something else, but really we are a small operation. This is why we only publish such a small number of books a year (between three and four), and why we look after every aspect of our publications.”

At the time of writing the Kickstarter drive has raised £4,802 of £8,500 goal. “We are not there yet,” says Murray “but we hope we can do it. Several friends have had their projects successfully backed, which was partly the reason for our attempt.”