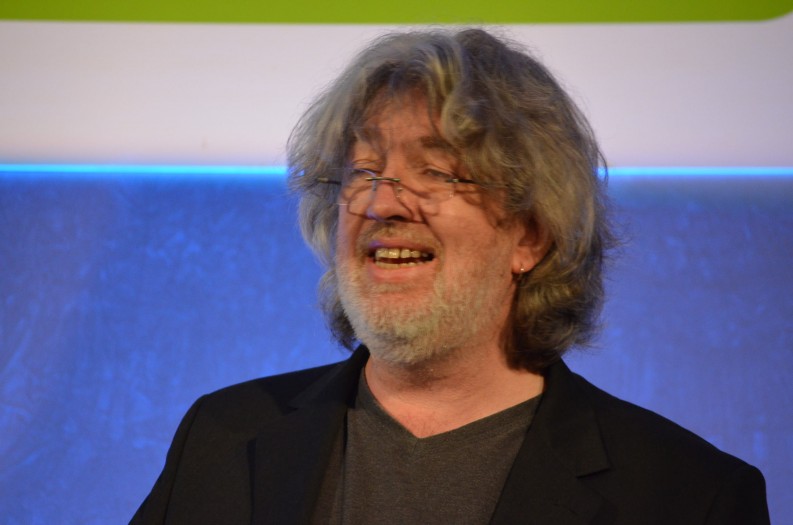 The Digital Minds conference in London took a philosophical bent, questioning is this “golden age for publishing or the end of the book?”

Copernicus, Ptolemy, Einstein, Wittgenstein and Willard Quine (don’t worry…he was a US philosopher and logician) were all name-checked in a presentation at yesterday’s Digital Minds that was as abstract as the speaker’s hair. Bill Thompson from the BBC Archives gave a philosophical masterclass on what we mean when we refer to a book and how the print and digital versions are very different animals, one passive, the other active.

“A [print] book sits there. It will contain the same words every time you open it. A book is outside the stream. Like a neutrino [sic: it was that sort of presentation], it rarely interacts with the world or interferes with the thoughts of even a single reader. This is its merit and its damnation…It is printed, dead, done with. Furniture.”

Thompson thinks the industry needs to find a new paradigm because at the moment “publishers, agents and authors still act as if printed books are the center of the universe, and all other forms of publishing revolve around the printed, bound text. This Ptolemaic model works up to a point. But it makes it hard to understand or explain the movement of the planets of Twitter, Facebook, Kindle, iBooks or even YouTube.”

Earlier, in the keynote address by bestselling author Anthony Horowitz, the merits of e and p were also raised. Though he admits to using a Kindle when he travels, he said that he loves the physicality of printed books. “On a Kindle you have no sense of the journey between page one and page 100. With a printed book, each turn of the page is an unveiling. Also, physical books remain at home with as your friends. I still have my signed Ian Fleming and the original Sherlock Holmes collection my father gave me when I was 17.”

Then he became philosophic too. He talked about the book as “false friend, as in Atonement, and the ideas Nabokov played with in Pale Fire. In fact, I’ve always wanted to write a book in which the physical book plays a part too, where the reader has to solve a mystery by tearing something to reveal something hidden in the cover.

Horowitz also has thoughts on ebooks too. He doesn’t think publishers are rising to the challenge of what is possible. “Why can’t I press down on an author’s name and find out if they are telling the truth or not?  Why can’t we involve the reader more in solving the puzzle in a detective story?”

But despite some strong, much tweeted words about Amazon — he said they were “evil” but added, “and wonderful too” because of their customer service — his strongest words were saved for British Minister of Justice, Chris Grayling, currently leading a move to stop prisoners receiving books.

“I am worried that we are moving towards a more hard-edged society. The barbarians are at the gate. Mr. Grayling is blind to the redemptive quality of literature and its civilizing affect.”

And while he is saddened by the closure of bookshops, he is more worried about what is happening to libraries, in particular school libraries. He thinks a good school librarian “can instill a love of reading that can last a lifetime”.

But he concluded: “Books will not die. I think we will always have books, just like churches have candles.”

Later, in a roundtable discussion that ended the day, a question was posed by Random House’s Dan Franklin that seemed to summarize and the philosophical bent of the day. “Is this a golden age for publishing or the end of the era of the book?”

Asked  what the changing role of literary agents will be in this new era, Curtis Brown’s Jonny Geller replied, “We manage intellectual copyright and the author’s career. However that is done, we must facilitate that. Emotion and editorial unity is incredibly important for an author. What happens to an author when they hit big, when adversity comes? What does that mean when things are large and small and how do we influence publishers? Water flows strongest to its source, that is a good metaphor for the profession.” Or to paraphrase, as long as they stay close to the creative side of the business, that is where the future of agenting lies.

This may be a lesson for one and all looking for answers as to what their likely role will be in this digital era.