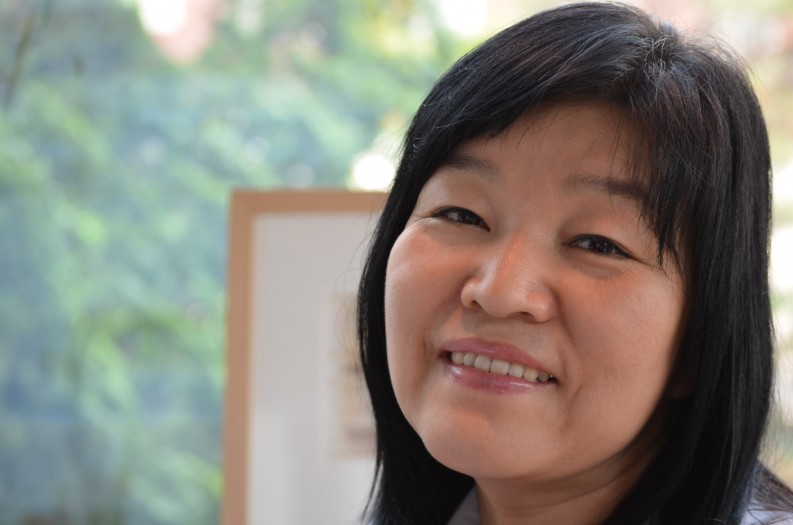 Kyung-sook Shin is one of ten Korean authors who will take part in next week’s London Book Fair as part of the Korea Market Focus program. The border with North Korea and its famous Demilitarized Zone (DMZ) must be one of the happiest and saddest places on the planet – happy because it is full of tourists having their pictures taken with the South Korean soldiers, who clearly enjoy the flattery (“Hey, he looking good this one!” josh their colleagues to each other over the tannoy); sad because it divides one people, brother from brother.

Newspapers in the west are full of the animosity between the two countries – all those stories of missile launches and military exercises on each side of the border. But when you visit, when you are there on the ground in this odd place, one doesn’t sense a raised fist; rather, an outstretched hand. The message, the signs, are all of peace and reconciliation. It is moving, even more so when one gazes out on the four-mile strip (two on each side of the border) that forms the DMZ itself.

This has become – unintentionally – one of the world’s most unusual nature reserves, home to species not found anywhere else. Almost completely untouched by humans for 50 years and stretching for 160 miles, it has become a kind of paradise, a symbol of what is possible when nations live in harmony; what began as the DMZ has given way to the PLZ, the Peace and Life Zone.

In the west, we rightly have an endless fascination with stories from the North, with eyewitness accounts of a barbaric regime that we can barely imagine. More may emerge next week, when Korea – not South Korea – is Market Focus at the London Book Fair.

Pressure is mounting on the regime in the North. In February, the UN issued a damning report into alleged crimes against humanity in North Korea and called for the International Criminal Court in the Hague to investigate. Marian Botsford Fraser, Chair of PEN International’s Writers in Prison Committee said: “The international community must speak out on behalf of the silenced and brutalised people of North Korea, people whose very thoughts are criminalized.” At the border, everyone wans their picture taken with a soldier

Last October, Korean PEN and the North Korean Writers in Exile Centre hosted a seminar in Seoul at which Fraser said: “In the history of PEN, many of our most powerful, effective resources have been the poems, stories and memories of imprisoned writers, written while in prison, and subsequent to release, and in exile. Many of you here today in Seoul have or know of such stories, which could be written, or related in the form of interviews, and published both in Korea, and in translation.

“It takes courage to undertake this kind of writing, but if we are to make the human rights crisis in North Korea as urgent and commanding of attention as politics concerning nuclear weapons, we need to hear those stories.”

Among the ten Korean writers coming over for the Fair is Kyung-sook Shin, author of the international bestseller Please Look After Mom, which won the Man Asian Literary Prize in 2012. She is one of the few South Korean authors to have visited the North, an unusual trip that she recalled when Publishing Perspectives met her in Seoul last year.

“It was my first time in the North and I was stunned by what I saw in Pyongyang. I expected differences – it’s a different regime, a different lifestyle, and it has been a while since we have been divided, so I expected it. But there was one particular thing I was surprised about.

“We were staying in the Koryo Hotel and on the second floor there was a bookstore. So I went there and there was a Korean dictionary – a Korean dictionary for North Koreans. But when I looked I noticed that the language had changed a lot, that the North Korean language was different. Yes, we are brothers and sisters, we’re of one ethnicity, but so much has changed with the language that I thought that if the division were to continue for a decade or two more, then there may come a time when we can’t communicate with each other. That would be a very unfortunate and sad thing to happen. So I thought that before that happens we should reunify, we should do it before that happens.”

But she feels that reunification plans are too short term – that they don’t look far enough ahead. However, she recognizes that because the two countries have been divided for so long, it is hard to predict what is going to happen.

“I feel that before we grow more apart, we should reunify. Korea is known to be the only divided country in the world, and this is not something we’re proud of. So I believe we should escape from that title, get rid of the title, and the method is to keep talking, keep communicating with the North. I believe we should continue having our dialogues and once we do we will come to a result. I believe that we really shouldn’t go back to the Cold War days when we did not talk to each other.”

It would be absurd, of course, to liken the London Book Fair to the UN, but gatherings like this – and Frankfurt and other occasions when the international publishing community comes together – do serve to spread the flow of information and knowledge about other parts of the globe, and that can only be a good thing. Food and shelter and freedom come first, naturally. But beyond that, what better if that outstretched hand offers a book?