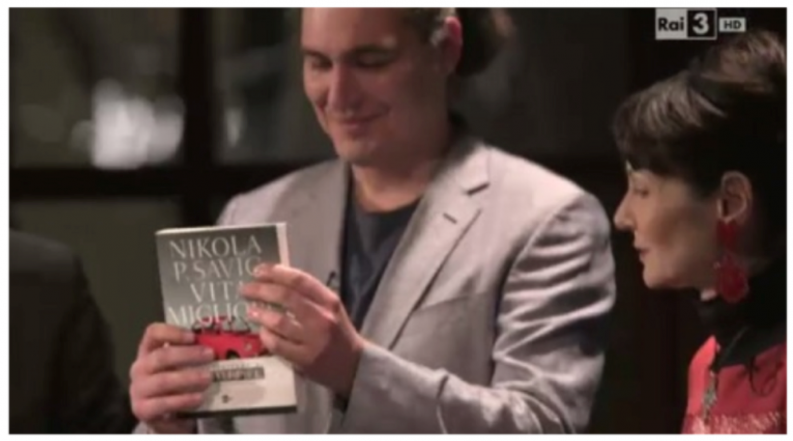 Italy’s “Masterpiece” TV reality show for writers failed to attract viewers, in part, because it didn’t account for the way writers empathize with others.

On March 30, the RAI 3 reality TV show Masterpiece promoted by the publisher Bompiani to find the “Next Big Italian Writer” ended with an unlikely winner, a Serb who lives in Venice: 36 year-old Nikola Savic.

Last week, on April 16, his winning book, Vita Migliore, was published in 100,000 copies and distributed to the libraries across Italy.

Two weeks to produce and distribute a printed book must be something of a Guinness record for a traditional publisher – as we all know, publishers usually require a minimum of six months to properly edit and produce a printed book.

I reported on Masterpiece when the show started in the fall. By December 2013, it was suspended (presumably due to low ratings), but by then Nikola Savic, a tall, hefty Serb with a quick smile, was already very much in the public eye. He must have been in Bompiani’s eye as well.

The show resumed for four weekly sessions in March, and churned through some 12 candidates at a fast clip – a rate twice as fast as in the fall. For the final episode, on March 30, five candidates were still in competition.

That evening, the winner was selected by a deciding vote from Ms. Elisabetta Sgarbi, the Bompiani Senior Editor. In explaining her vote, she noted that Mr. Savic’s book needed some additional editing, that this was “important” because of grammatical errors and awkwardness in the language (she delicately called it “aritmie”). This is probably to be expected from someone for whom Italian is not the mother tongue.  “It was an uphill choice,” she said, discarding the other candidate, a woman, Raffaella Silvestri, whose book still sounded quite attractive.

Certainly an uphill choice and possibly a brave one.

On the other hand, we may have been given a preview of how Bompiani worked its minor miracle of such a quick turn around on Savic’s book publication, for when Ms. Sgarbi walked up to Savic on the podium to congratulate him, she brought to him… a printed copy of his book: Yes, that’s his book. It seems it was already in print on March 30th. Or maybe not? Perhaps that was just the cover and the inside pages were blank…An alternative (and more probable) explanation is that the whole show was probably shot in a few weeks back in the fall (this is normally done for Reality TV shows to save money) and that Bompiani knew by November who the winner was. So they had in fact some five months to produce the book. Minor miracle explained!

With respect to the show’s declared objectives—to raise public awareness of writing and writers—one can only regret the way it went. As reported in the local press, it attracted few viewers and fell well below the average for Italian reality TV talent shows.

It certainly once again raises the question of whether writers can be fodder for TV shows. Aren’t they better off left in their ivory towers?

Looking back on this show, several mistakes were made at the outset, chief among them not allowing the winner of one session to carry over to the next, thus losing a chance to get viewers more involved in the fate of contenders. Efforts were made to get contenders to “fight” among themselves, for example, in the last session, a couple of contenders were asked to give the most negative opinion they could think up about each other’s book. It was not a pretty sight. Such efforts however seemed to have backfired and whenever one lost, the other rushed to embrace and console the loser. As was done here: The loser Vargas is consoled by the contenders Nikola Savic and Raffaela Silvestri.

The savagery of classical talent shows didn’t appear to carry over to the writers. It would seem that the kind of uncivilized behavior exhibited in other reality show was difficult, if not impossible, to extract from the writers. Writers are by trade intellectuals who tend to empathize with others, itself an asset in dreaming up their characters and constructing their plots. There is no question that a reality show for writers should take into account the particular mental predisposition of writers who are, when all is said and done, very different people…or they wouldn’t write at all.

In short, no one has yet come up with a successful TV show featuring writers and Masterpiece certainly failed in this respect. If such a show is ever to succeed, more attention will need to be given in future to the way writers think and react.

On the other hand, if the objective of the show was to unearth the Next Big Writer, then more importance should have been given to the opinion of the audience. In the last session, an interesting effort was made to put together an audience in the studio and inform them in advance of the books competing as finalists (through synopsis and excerpts) and get the finalists to pitch their books directly to them, as was done here, with each contender supported by a well-known Italian author: Last challenge in front of the jury and a crowd of invited onlookers; the contenders are supported by major writers, on the right, Savic by Susanna Tamaro and Raffaella Silvestri by Donato Carrisi.

After the performance, the audience was asked to vote and they favored Raffaella Silvestri over Nikola Savic. Nevertheless, the Masterpiece judges (Andrea De Carlo, Giancarlo De Cataldo and Taiye Selasi) voted for Savic and so did Bompiani’s editor, thus disregarding the opinion of the public. This was a lost opportunity  to take into account what  people think and like.

No doubt, Bompiani and the TV producers will carefully review the results of this show and draw some lessons. We can only hope for a better show the next time around.