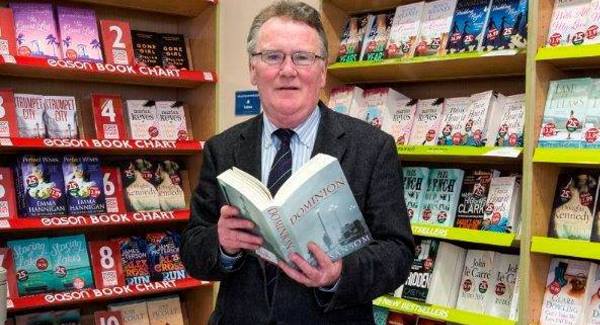 John McNamee of Easons Bookshops in Ireland, recently stepped down as President of the EIBF.

Outgoing president of the European and International Booksellers Federation John McNamee discusses interoperability for ebooks, VAT, and offers advice for future survival in the book biz.

As announced earlier this month at the London Book Fair, the Irish bookseller John McNamee has stepped down as President of the European and International Booksellers Federation (EIBF). A new President will be announced sometime this fall to coincide with the Frankfurt Book Fair. We caught up with McNamee for an exit interview to discuss his tenure at the organization, its accomplishments and the ongoing challenges for booksellers around the world.

In your opinion, what was the main achievement of your tenure as president of the European and International Booksellers Federation?

Without any doubt, the report on interoperability is one of our main successes, for a number of reasons. First, I think it was very difficult for the institutions in Europe to understand exactly what was happening in the industry, and how the dominance of one or two big global players was potentially threatening cultural diversity and smaller organizations right around Europe. We need to continue to press for legislation so we don’t have that dominance in the market.

Interoperability is one of the main demands of the EIBF: do you think this issue has evolved since the beginning of discussions with the European Commission?

We’re still using the report, because the facts have not changed. If we can achieve a standardization of how the flow of digital products is controlled, then that opens up the market for everybody. We would like to get legislation, it takes time. But if you look at roaming charges which have been changed for 2015, we think that’s the space we need to put our arguments in terms of open standards, everybody using the same format. It’s a help for us that mobile-phone operators have to have standard charges as well, because consumers were being affected. And we believe consumers are being affected by being locked into one ecosystem, as it were, as is the case in the digital world at the moment. The change regarding roaming charges really is a game changer.

IDPF is also very active on this issue, are you working together?

We have a representative on the board of IDPF, Len Vlahos, and we are working with BISG and BIC in the UK, and they were very happy to support our report on interoperability. We will be working closely with them all along the w

“Digital is only a part of the future. It is not the whole future.”

How have discussions with the European Commission evolved over the years?

The main difficulty is the new Parliament which will be elected in May, so we have to start all over again. We have to wait and see who the new Commissioners are. We have to watch who is appointed to the cultural committees, and to the committees dealing with digital affairs. However, once again, our report on interoperability opens the door for us, because we can point to it. We hope that some cabinet members will stay around in Brussels because knowing some of the secretaries is a help. I think we are in a better position now than ever, in terms of lobby capabilities. We have a very clear vision of what the federation needs to be and do, and how to move forward.

The 2015 law on VAT is one of the main concerns of European booksellers: what is your position?

The law is not very clear, at the moment. There is still a difficulty in deciding what is a digital service, and what is a digital book. One may attract full VAT, one may attract a lower rate of VAT… I think a law which is difficult to enforce is a poor law. I believe there is still a lot of work to be done on this. In my view, the cost to our members would be prohibitive. On the one hand, I understand the reasons for VAT harmonization, but on the other, it doesn’t seem to make sense that it comes as part of the European Commission’s digital agenda whose goal is to encourage people to sell digital books across borders. This can’t be done under the conditions that we have at the moment. Laws need to be clear.

Some Nielsen figures regarding ebook prices suggests that new ebooksellers might have difficulties entering the market in the UK. Is this market still of interest to you?

We look at the average selling prices for ebooks in the UK, and it is actually very difficult for a bookseller to enter the market without losing money. Nobody, for the moment, is making money, and the big resellers only want market share. It devalues the product, and anything that devalues the product is wrong. It’s a difficulty right now, with free price areas. The UK and Ireland Booksellers Association has signed a deal with Kobo which has a platform that independent booksellers can join. The systems are there, but it’s very difficult for a bookshop to market aggressively in the digital domain.

How can booksellers and publishers work together to help them survive?

I think we have to realize that digital is only a part of the future. It is not the whole future. Publishers need to understand that losing bookshops and losing visibility in the high street across Europe is a very bad thing. If bookshops close, the business dies. We have to be innovative, and think in a different way on how we keep booksellers going.

If publishers can take some responsibility and change the business model to a consignment procedure, that would save a lot of time and money for booksellers. It’s a model we should consider, it’s radical, because it’s really different, but if a publisher has a full warehouse of books, he can’t sell them from there. I firmly believe, too, that publishers producing special editions, signed editions, limited editions or rebranded editions for bookshops is a very good idea. The bookseller community and the publishing community need to work more closely together to encourage European booksellers and keep bookshops alive.