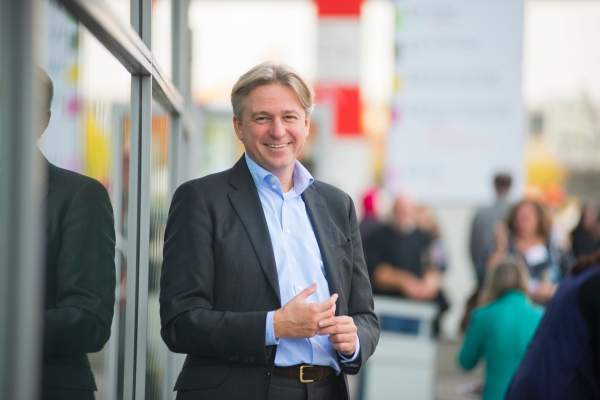 PP: Big changes are coming to the Frankfurt Book Fair in 2015, including closing Hall 8 and moving all the English-language publishers to the middle of the fair in Halls 6 and 4. Why?

Juergen Boos: We now acknowledge that all business is really “local” and you have to meet the people who are in “local” markets. You have to bring people even closer to one another. As it is now, it takes 20 minutes to walk to Hall 8 and another 20 minutes to walk through Hall 8. If you want to meet there, it can be time consuming. Our business is global, but with a very strong local attitude and focus. At the moment, the English-language publishers have complained that they feel separated from the rest of the global community and this will go a long way toward resolving this problem. The move to Halls 6 and 4  is simply efficient. And it is welcome. It certainly is a change — people will have to get used to the new environment. The fair is merely growing on another side, we may take more space in Hall 1. But the fact remains that English-language publishing will now be at the heart of the fair and, when you talk to people, that is what they want.

What are the advantages beyond this new proximity toward the rest of the world?

Another big advantage is that we are now bringing the English-languages publishers closer to the agents and scouts, who will also be housed in Hall 6. What’s more, we are also moving away from “territorial thinking” and toward a “subject-oriented business focus”…you have the trade publishers on the one hand, the packagers, the people doing children’s books. We are working to make this visible, so it is not a territorial world now, but one based on business models.

And yet the agents will remain in their own little castle? With guards?

This may have been so in the past, but the case is that you know where to find them. You want to meet them, you will have to go there. They are very identifiable. We have seen growth in the rights center over the past years, and there is a lot more business to be done with the division of rights. We have to showcase this as well and have done so by putting the rights people in the middle, a move we have made already, and now we are moving the English-language publishers to the middle.

There are additional changes coming for the Asian publishers. Why?

Frankfurt has always been the one marketplace where it has always been “about the people.” It has a function for the general public, and it is one of the largest cultural events in the world, but it’s really about people from 110 countries, large and small alike. I think the most important function is the exchange of ideas and intellectual property. We’ve already seen big changes in the industry over the past several years. What we are doing is mirroring what is happening in the industry — we are supporting this exchange as we are all coming closer together. Asia is a strong growth market and it makes sense for the publishers — who will be located in Hall 4 — to be closer to the English-language markets and the Germans.

And for developing markets in Latin America and elsewhere?

There are a lot of new business models that are coming out of this developing world, that are coming out of South East Asia, that are coming out of Latin America. The Latin Americans are located in Hall 5, which we call the “United Nations of Publishing.” They will be there alongside Spain, France, Italy, Scandinavia, and other European countries. Why there? You are seeing, for example, that Spain has been saved by Latin America, that Mexico is strong and growing. In many of these places, education is more important than ever. Education is another priority for us, and actually it is very much technology-driven. This is interesting because it is strengthening the book fair at its core. It is always about bringing people together. It may be by content, it may be by language, it may be by technology, and we have to showcase all of these layers.

If technology is so important, why doesn’t Frankfurt have a hall dedicated to digital?

We’ve seen digital becoming normal, and it is offering huge possibilities for all of us in the industry. Because it is now day-to-day business, it’s now integrated in what we do. On the one hand, digital means workflow, and on the other hand, it is the normal life of the publisher – it doesn’t need a dedicated hall in that sense. If you want to see gadgets, you can go to CES. Digital doesn’t mean hardware, it means business models. It’s context.

Globally, a lot of people see companies like Google, Apple and Amazon as coming to dominate the global books and publishing business, but you don’t see them on the floor. Do they not feel the need to be there?

Of course they are there, just not always in booths. They need to be close to the content. But many of them are not in the book business, as such, but are in the devices or logistics business. That said, Samsung, for example, will be one of our bigger exhibitors this year. It is interesting that a company that was previously technology- and gadget-driven is now closer to the content.

Does this mean that with digital books, you don’t need space to display them, so space is becoming less relevant?

The emphasis has never been on displaying books or material. It has been about the people meeting each other, selling rights, building new ideas, learning from each other, and opening new markets. There are a lot of reasons to be at Frankfurt, it doesn’t always have to do with displaying “the book.”

So with this change, it is ultimately about where people meet and talk? So why even bother have a booth?

You want to be recognizable, you need to identify yourself, that is why you need a stand. For example, if you are Indonesia, Brazil or the Philippines, countries who are coming along and want to raise their profile globally, you will want to make a statement. We are seeing that. This is the same for large corporations that have a very global, but also a very local strategy. And in this case, this often means having both a global-facing and a local identity, which brings us to the conference title we coined in India, which is GlobalLocal. It summarizes it beautifully.

And how will this affect the German publishers? After all, Frankfurt has a split personality as both an international fair and a local one.

We have seen a huge increase in interest in German publishers from around the world and now they will be in even closer proximity to the rest of the world. As a large group, Germans do many, many translations and are important to the rest of the European publishers as a gateway. While Europe has become a very multilingual place in the sense of publishers reading and sourcing from a wide variety of European languages, Germany is the leader in translations. If you are a publisher from Indonesia, you might want to start by getting a translation into English, or else into German, because the European market will tend to follow the Germans market. That is another function of Frankfurt: to show these trends.

One question many people ask is, “Why Frankfurt?” It is still relevant because…

It is important for people to meet at least once a year. Frankfurt is most relevant for that reason alone. We are the meeting point for the world book business. On the other hand you have this strong global aspect that creates synchronicity when people get together in Frankfurt. Last year, for example, we saw the Latin American university presses coming as a collective, as an association, and suddenly there exists a platform for exchange between the university presses worldwide. Or to take another example, where will the Egyptians meet the international markets if there is not a functioning book fair in Cairo any longer? In times of international instability, culture becomes more important. And you can never forget that Frankfurt is a “safe place” for one and all.