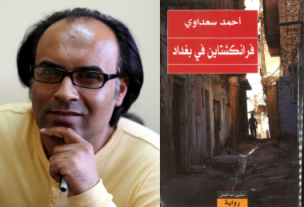 Frankenstein in Baghdad by Ahmed Saadawi has been announced as the winner of the seventh International Prize for Arabic Literature.

Saadawi was named by this year’s Chair of Judges, Saad A. Albazei, at a ceremony in Abu Dhabi. In addition to winning $50,000, Ahmed Saadawi is guaranteed an English translation of his novel.

Set in the spring of 2005, Frankenstein in Baghdad tells the story of Hadi al-Attag, a rag-and-bone man who lives in a populous district in Baghdad. He takes the body parts of those killed in explosions and sews them together to create a new body. The body is entered by a displaced soul, bringing it to life. Hadi calls the being ‘the-what’s-its name,’ while the authorities name it ‘Criminal X’ and others refer to it as ‘Frankenstein.’ Frankenstein begins a campaign of revenge against those who killed him, or killed those whose parts make up his body.

Frankenstein in Baghdad was selected as the best work of fiction published within the last 12 months, from 156 entries originating in 18 different countries across the Arab World. Speaking for the 2014 judging panel, Saad A. Albazei said:

“We chose Frankenstein in Baghdad for several reasons. Firstly for the originality of its narrative structure, as represented in the ‘what’s-its-name’ character, who embodies the violence currently experienced in Iraq, other Arab countries and the wider world. The story is expertly told on several levels and from multiple viewpoints.

“For these reasons and more, Frankenstein in Baghdad is a significant addition to contemporary Arabic fiction.”

And three days before the award ceremony, in The National, Jonathan Taylor, the chairman of the International Prize for Arabic Fiction (Ipaf), which is funded by the Abu Dhabi Tourism & Culture Authority and supported by the Booker Foundation announced that the prize “has been a successful journey. It is the most important prize in Arabic literature in terms of recognition, reward and readership to leading, very good writers, in Arabic.”

In the article, Asmaa Al Hameli points out that one of the main goals of the prize is to encourage the translation of Arabic literature into other languages.

“What the prize does is secure translation for the writer, and this is the most important thing a prize can do,” said Taylor.

Taylor argued that it’s important to find the right translator for the job, since Arabic is a highly expressive language in terms of dialect, accent and style. But, says Taylor, when this “rich source” is translated, there’s a risk that it will lose its richness. “There have been very few bestsellers [when translated] to other languages,” he told the paper.

Because of that, part of Ipaf’s mission is to collaborate with good translators and reward them.

As an example, Taylor cited London’s Banipal magazine, which has been showcasing the work of Arab authors in English translation for the last 15 years.

Ahmed Mourad, shortlisted for this year’s Ipaf for The Blue Elephant, said that translations offered “an important opportunity to reach a new sphere and different cultures, which can add to and enrich it.”

“I don’t think that the writer should change his literary process in order to have his works translated internationally,” he said. In fact, I think that when the novelist makes a dedicated effort to create a state of mind or an atmosphere with a truthful and moving ring about it, after careful research, then his work will reach every person and every language.”

And Khaled Khalifa, whose No Knives in this City’s Kitchens was also shortlisted this year added, “I have started to understand better what it means for a writer to go to another culture and for people who are completely different from you to receive you.

“It is another life bestowed upon the books of any writer.”