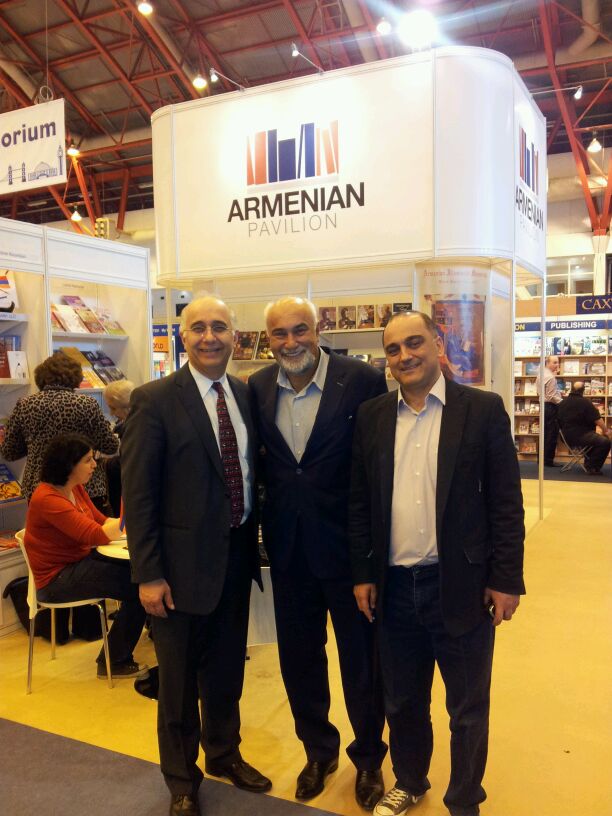 After 500 years of publishing, Armenian writers and publishers are coming out of the shadows, and presenting a unified face at world book fairs.

After 500 years of printing and over 1,000 years of manuscripts, Armenian writers and publishers are finally coming out of the shadows, realizing their dreams and sharing them with the world. Whilst Perestroika lead to the breakup of the Soviet Union creating several countries that existed many years earlier, one has to spare a thought for the unique dynamics of one particular country and nation – Armenia and the Armenian Diaspora whose authors, writers and poets have articulated a century of passion and truth influenced by their adopted surroundings.

The Armenian Pavilion at the London Book Fair had a unique formula in that it brings together Armenian publishers, authors and writers from Armenia and the Diaspora on one stand, sharing with the world the wealth of knowledge and talent that the Armenians have to offer. This was mostly thanks to a British Armenian benefactor Raffi Tanielian, and his sister Nyree, both who had the foresight to recognize the importance of the Pavilion and what it represents. In its second consecutive year, the Armenian Pavilion registered thirty-three exhibitors – almost three times more than the previous year. With the support of the Armenian Embassy in London, twelve of the registered exhibitors were from Armenia and the rest from France, Germany, Lebanon, Turkey, United Kingdom and the USA. The category of books varied from culture, religion, history and genocide to novels, travel guides, cooking, children’s and autobiographies. Emphasis on new publications and reprints were made, which included Armenia and Karabakh: The Stone Garden Travel Guide by Matthew Karanian; Masis, a novel by Raffi Adam Kevorkian; The Greedy Sparrow, a folk tale by Lucine Kasbarian, cartography books by Rouben Galichian, and an array of children’s books by Nouneh Sarkissian.

For the first time at the Armenian Pavilion, the Hrant Dink Foundation (HDF) and Aras Publishing from Turkey were able to attend with support from the Calouste Gulbenkian Foundation. Overwhelmed with emotion, Hermine Sayan from HDF said “I was apprehensive at first, but I am so happy to be here amongst my fellow Armenians.” Both HDF and Aras have promised to return next year, well informed and better prepared. On a special trip to the Pavilion, Deputy Culture Minister of Armenia Nerses Ter-Vardanyan praised the work of the committee, saying, “The Armenian Government would not have done a better job. We owe it ourselves to look forward and build on what has been achieved here.”

Understandably, not all of the exhibitors were able to travel to the exhibition. Those who could not were represented by the Armenian Pavilion Committee tasked with the responsibility of displaying their books and gathering information from interested visitors. As creator and initiator of the concept, I headed a committee made up of dedicated volunteers from the British Armenian Community. The committee, which re-groups annually, was this year supported by the Armenian Community Council of the United Kingdom (www.accuk.org.uk).

Discussions are already underway for next year and subject to a satisfactory result, the committee hopes to return with an improved stand growing bigger in size and in the number of exhibitors. Representatives from the Frankfurt Book Fair made a special visit to the Armenian Pavilion. In describing the stand, they said “you have internationalized the Armenian publishing industry by pooling all this talent from many parts of the world. We would welcome it if you brought this concept over to Frankfurt.” Perhaps with the correct support and backing, this may very well be possible.