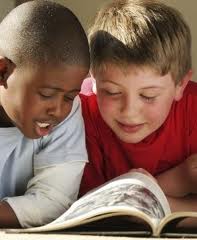 Are “boys are being deterred from reading because the ‘gatekeepers’ to children’s literature are mostly women?,” asks an author for The Times of London. Are women to blame for boys not reading?

Writing for The Times of London, David Sanderson and Fiona Wilson report that author and illustrator Jonathan Emmett believes that “boys are being deterred from reading because the ‘gatekeepers’ to children’s literature are mostly women.”

Emmett, observing that the majority of publishers, editors, librarians, judges, and reviewers of children’s books were women says that this is the cause for the literacy gap between boys and girls.

Sanderson and Wilson write that he believes that “children’s books tended not to contain the elements many boys were attracted to, such as battling pirate ships and technical details about spaceships,” adding that research shows that the majority of children’s books in newspapers, including The Times, were by women.

Emmett noted that for the past two years, all twelve judges for Britain’s most important children’s book awards, the CILIP Carnegie and Kate Greenaway medals, have been women. “It is a really difficult argument to make because 99 times out of 100 it is women that are under-represented.

“But there is a literacy gap – boys are underachieving, boys do not like books as much as girls. I am arguing that this is because the industry is dominated by female gatekeepers.”

The article cites a British government report that found that the gap between boys and girls’ reading abilities is evident by the age of five, and that boy’s reading abilities later lag behind the equivalent of one year of school.

Emmet’s argument was supported by a number of female authors, including the award-winning author of The Gruffalo (PanMacmillan), Julia Donaldson.

“Sometimes I think that publishers make the mistake of never including any bad or violent things being done, even by baddies,” Donaldson told Sanderson and Wilson. “For example, you couldn’t have anyone smoking, even if it is a very bad person smoking and it’s clear that smoking is bad.

“Emmett probably has got a point – he wrote a book where there was some bad character who bashed up people, but a gentle female editor thought we couldn’t even show someone bad doing bad things or doing destructive things.”

Emmett, a winner of the Red House Children’s Book Award for Pigs Might Fly (Puffin), told The Times that of the 50 editors he had worked with over the course of his career, only two were male. One publishing company, he reports, told him that research seemed to suggest that 95 percent of picture books were purchased for children by women.

“Mums and grans buy books – that’s what is driving the market,” he said. They read the book also and then there’s a tendency for the book to reflect their tastes as well. So there may be a pirate but that pirate will not be engaged in a battle.

“The number of times that I have tried to get technical information into a book and it is deemed inappropriate. It is one of the things that leads boys, and girls with boy-typical tastes, to say ‘I am not really interested in that kind of content. I am more interested in the content of video games.’”