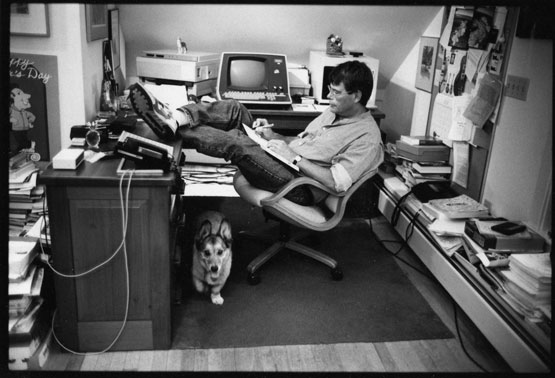 That list of books that Stephen King says influenced his writing in the last three or four years is fascinating. It forms a new Afterword to his On Writing : A Memoir of the Craft (Scribner) and was given wider coverage last week in the curiously named Aerogramme Writers’ Studio site.

The list includes To Kill a Mockingbird so one assumes he means “read again” in this instance. But although it’s fun to scroll through the 96 books (why not 100?) and think “Yes!” or “No!” or “Who?”, it’s the photograph of King on the jacket of the book that has most captivated me.

This is a great picture, a classic. It was taken by Jill Krementz around 1995 and was included in her book The Writer’s Desk (Random House). Surely I cannot be the only person to have pinched and zoomed it several times, hungrily exploring what it reveals, searching for some clues to the way this writer works. It shows King, leaning back on his ancient wheelie chair, feet up on the desk, making notes in longhand, seemingly oblivious to the photographer.

It looks like he’s wearing trainers, with his shirt is tucked into his jeans, something that might not happen today, such is the oddities of fashion (first shirts are inside, then outside, jeans are drainpipe, then flares, and so it goes). This is a picture that captures a particular period in time — those early, post-typewriter years, when PCs were just coming in.  That might even be a word processor looming by the far wall, like the one Richard Dreyfuss uses in Stand by Me when he types that poignant sentence. “I never had any friends later on like the ones I had when I was twelve. Jesus, does anyone?”

Old technology abounds. There are no tablets or mobiles here, and look at that corded office phone on the desk. Cool! And let’s not forget who’s under the desk. That kind of canine technology never dates. It’s Marlowe, of course, one of King’s beloved corgis.

We gaze at this photo and think ‘So that’s how you do it. You use a longhand notebook, you put your feet up on the desk and….and….the ideas just come…” There’s an interview online between journalist Ian Katz, then at the Guardian, and a faintly snooty Ian McEwan who despairs at being asked how he writes, what notebooks he uses etc. He seems to suggest that such questions are banal.

But one imagines McEwan is as interested as anyone else when he visits Dickens’ house in London, or sees Kipling’s desk at Bateman’s in East Sussex or visits Longfellow’s house in Cambridge, Mass. We look at their objects on the objects these writers have on their desks and feel a kind of wonder.

Meanwhile, you’ve mastered the leaning back bit (Sheryl Sandberg you’re wrong — it’s “back,” not “in” that you lean!). And the feet on the desk bit is really quite easy — in fact, you’ve discovered you’re a natural. All you need to sort now is what to put in the notebooks.  Er…