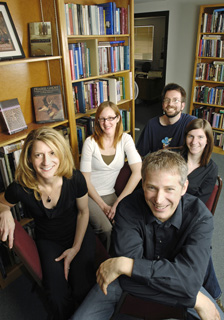 A discussion with the directors of the University of North Texas Press, Fordham University Press, University of Colorado Press about their strategies for pursuing foreign rights sales.

In a slight departure from our regular series looking at what’s happening in key publishing territories around the world, this month we’re focusing on the growing value attached to university presses. An often misunderstood component of the publishing industry, university presses publish a huge volume of work comprising of scholarly, intellectual and creative merit, often for a small audience of specialists or a regional community of interest.

However, although scholarship remains central to the mission of university presses, the majority also publish books of more general interest. That might mean narrative history, poetry or fiction translated from other languages. As commercial publishers increasingly turn away from books deemed unlikely to make a lot of money, university presses have found new fields in which to publish and subsequently new audiences for their books.

Rights, permissions and licensing are playing an increasingly important role for such publishers and as such we quizzed three US-based university presses on territories and opportunities currently under consideration.

Tom Chalmers: Can you give a brief description of the areas in which you specialize? Ron Chrisman, director of the University of North Texas Press Fredric Nachbaur, Director at the Fordham University Press (FUP): FUP has an outstanding reputation for producing award-winning studies in the fields of anthropology, classics, communications, the fine arts, history, literary studies, philosophy, political theory, religion, sociology, and theology, with a particular emphasis on creatively interdisciplinary work.  Each year it publishes two books of poetry through the Poets Out Loud prize. FUP also has a long history of publishing books focusing on the New York region and in 2010 established the Empire State Editions imprint to better brand and market these popular regional books. Staff of the University of Colorado Press, circa 2008. Darrin Pratt, director, is pictured bottom right. (Photo: Inside CU)

Chalmers: How important are rights and licensing to your business model?

Chrisman: In the past we have occasionally placed titles with book clubs, sold first serial rights to selected periodicals, and licensed foreign editions in Asian and European markets. We have found several titles in our Lives of Musicians Series especially appealing to foreign markets. UNT Press seeks to expand the reach of our publications worldwide as part of our university’s mission to advance and disseminate knowledge. So increasing our licensing opportunities through a platform like IPR License is key for us.

Nachbaur: As part of the University’s mission to expand its presence in international markets, FUP has implemented strategies to get its books to a greater number of international readers. I regularly attended the Frankfurt Book Fair to sell FUP books to international publishers. The marketing department recently created the first subsidiary rights catalogue to be distributed at Frankfurt, with an interactive version featured on the FUP website. These rights are a small part of the overall business model but one in which I see a great opportunity for increased sales and deeper market penetration.

Pratt: Rights and licensing have not historically been a big part of our business (about 1% of overall revenue), but we are certainly hoping to do more business in this area.

Chalmers: Are there any specific territories or sectors in which you are looking to acquire or sell titles?

Chrisman: We would like to see more licensing opportunities for foreign editions in China, Japan, and Korea. We also believe select titles among our western history publications, especially our more popular outlaw-lawmen titles, would be of interest to European publishers for foreign edition licensing. One practical guide title, Special Needs, Special Horses, a guide for horse therapy with children, has found several good homes overseas in countries such as Korea and Israel and would be of benefit to any publisher worldwide publishing in self-help.

Nachbaur: FUP is looking to increase its exposure in Asia and India but remains open to all markets. Many of our books are written for a global audience and lend themselves to translation or to be published in English outside North America.

Pratt: We would be happy to sell translation rights anywhere there may be an interest. Because we publish in the English language, we are also open to co-publishing arrangements in the UK. In terms of purchases, we are primarily interested in acquiring North American rights to titles in English.

Chalmers: What do you see as the main opportunities for university presses in the current marketplace?

Chrisman: Our business models are transforming and the scholarship we publish is finding new avenues of dissemination online and through ebooks. I believe the reach of our publications will be greatly expanded in the coming years through digital entrepreneurship, such as by repackaging our content to meet the needs of today’s readers beyond the traditional printed book. Licensing portions of our work to select electronic vendors, for example, who would then license access to consumers to download and read select portions as a subscription service, would result in more reach for our publications as well as a new source of revenue.

Nachbaur: As commercial houses merge and become parts of huge conglomerations, there is little opportunity for specialized scholarship in the humanities and social sciences and general interest books by less-known authors. University presses should maintain a commitment to publishing books in both print and electronic formats with an eye toward exploring new digital models in content and distribution.

Pratt: Right now, based on what we have been seeing over the past couple of years, I’d say that the biggest opportunity for university presses lies in potential translation rights in Asia. There also seems to be some sales opportunity in the Middle East, but whether or not there are also rights and licensing deals is an open question.