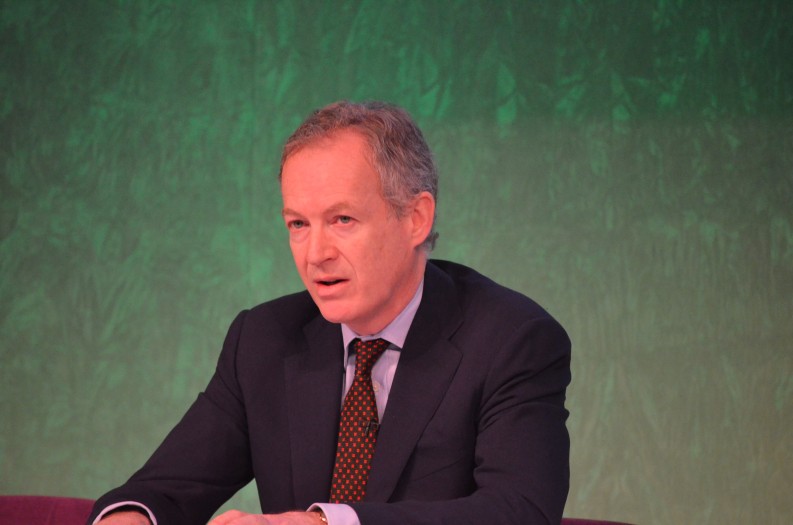 Stephen Page at last week’s UK Independent Publishers Guild with a photo of TS Eliot in an editorial meeting for his “Four Quartets.”

“Time past and time present/Are both perhaps present in time future” —T.S. Eliot

Much of the positive mood at last week’s annual conference of the UK’s Independent Publishers Guild, held near Oxford, was down to a typically assured and upbeat keynote address from Faber CEO Stephen Page whose fans in the industry seem to grow in number every time he speaks

Page is now turning into the sort of figure who should be parachuted into companies whose staff are feeling low or uncertain about the future. In a long, TED-style talk, delivered without notes, he elaborated on many of his familiar themes — the permanent conversation that now has to take place between publishers and their customers and authors; the fabulous possibilities of enhanced digital books; the collapse of the difference between home and international, thanks to digital; and the need to act before others come in and steal ‘our’ — the industry’s — turf. He cited Amazon’s recent snapping up of the BBC’s Ripper Street series for its Prime Instant Video service as an example of the latter.

He used the famous opening lines of TS Eliot’s “Four Quartets” — “Time past and time present/Are both perhaps present in time future” — to structure it, showing a picture of an editorial meeting when Eliot himself worked for the publisher and pointing out that back then, the house was doing exactly what it does now and will continue to do: investing in content.

But, he continued, “For too long the focus on the trade stopped us thinking about consumers. Today, everyone in the company has a responsibility to have a conversation with our consumers. Among the things Faber will do less of in the future is spending money on persuading booksellers to buy stock — although every now and then we will spend a lot of money on doing just that.

“In the future we will talk to a lot of other people – to tech people, to film-makers. We mustn’t give up on the idea of digital books that are not just vanilla text. When we do moving pictures we embellish a text. Our edition of Shakespeare’s sonnets has 150 films.  Our edition of The Wasteland [developed by Touch Press and featuring numerous clips of the work being read] is the best edition there is.”

The book absolutely has a future, he said, but it will be in many guises. “Yes, we’ll do the 1.99 ebooks for those who want it, because clearly people like that.  But we’ll do more expensive bespoke items too.  In the future, it’s going to be about access and ownership. People might want the text at first, and then want to come back to the films later.”

Digital meant that the cost of entry into many markets had now collapsed. “The different between home and international has gone — that’s a dead conversation. We’re selling books in markets that we never did before because of digital.”

In a world where so much is being redefined, he said that self-publishing was now simply “part of the continuum that is publishing”. He also believes there is an argument for “a slightly more relaxed attitude to piracy.  We have good practices in place already. I think sometimes a more relaxed attitude can create demand.” This last point was echoed by his colleague, Will Atkinson. In an overview of the future ebook market, Faber’s Sales and Marketing Director said: “We should be more experimental on DRM. In a communications business artificial walls don’t make sense. The PA wants complete lockdown. Faber’s position is one of extreme agnosticism — we don’t think it’s right, but we still keep doing it.”

Some indies have dispensed with DRM too, as a show of hands revealed. Hazel Cushion of Accent Press said: “We don’t think it’s worth it. Our books are so cheap anyway, and putting DRM on is too expensive. And any piracy that happens we see as marketing.”

There was similar refreshing honesty elsewhere. Waterstone’s MD James Daunt referred to his own company’s website as “pathetic” and admitted that, although the chain was now “a more stable business with a viable future,” the company still had one important challenge. “We haven’t solved how to turnaround the top line sales numbers. We’re selling fewer books. Ultimately, we have to sell more physical books.”

His openness and willingness to answer unseen questions from the independent publishers present, and in front of a tweeting audience that included a number of trade journalists, was in marked contrast to the previous day when journalists were asked to leave the room at the session from Amazon’s Darren Hardy, Head of Vendor Management, Books, and a slide warned people against tweeting. One man who doesn’t complain about Amazon — doubtless because he has had to sign numerous agreements — is Kieron Smith, formerly MD of Amazon-owned The Book Depository. No, he’s not complaining — he’s taking them on, by bravely launching a new, global, online bookseller, Best Little Bookshop that will initially offer titles in English, French, German and Arabic. He’s hoping to bring the feel of independent bookselling to the online space with a site that also allows publishers to sell direct from it. He was greeted warmly: if there’s one thing everybody likes, it’s new players.

Fellow bookseller, Patrick Neale of close by Jaffe & Neal in Chipping Norton, introduced John Rubin who has developed the Above the Treeline and Edelweiss initiatives in the US which Neale hopes indies will sign up to in the UK. Treeline Analytics is an online collaborative tool focused around inventory management for independent booksellers, and Edelweiss is a B2B hub and customer retail management tool for booksellers and publishers. HarperCollins and Penguin have signed up in the UK, but resistance from wholesalers Bertrams and Gardners to release data is preventing take up among UK indie bookstores as yet.

Finally, there has always has to be at least one memorable moment during these conferences, and they can sometimes come in surprising places.  You wouldn’t expect a session on ePub3 to produce many light moments — but then Huw Alexander of academic and professional publisher SAGE drolly asked “Does anyone know what JAVA stands for?”  Nobody did, so he enlightened us. “Well, it’s just another vague acronym….”