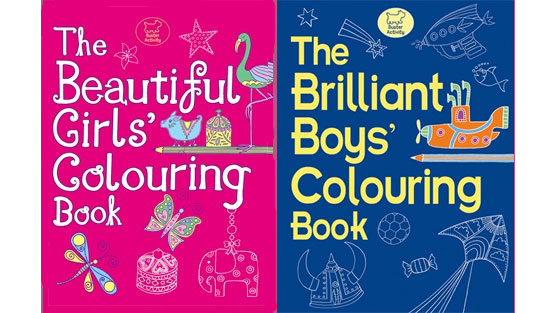 The Guardian reports that “a national campaign to stop children’s books being labeled as ‘for boys’ or ‘for girls’ has won the support of Britain’s largest specialist bookseller Waterstones, as well as children’s laureate Malorie Blackman, poet laureate Carol Ann Duffy, Philip Pullman and a handful of publishers.”

The campaign is called Let Books be Books, and aims to put pressure on retailers as well as publishers not to market children’s books that promote “limiting gender stereotypes.”

In just one week since the campaign’s launch, it has received the support of publishers Parragon and Usborne.

A petition calling on children’s publishers to “stop labeling books, in the title or on the packaging, as for girls or for boys” because “telling children which stories and activities are ‘for them’ based on their gender closes down whole worlds of interest,” has received more than 3,000 signatures.

Philip Pullman, author of the His Dark Materials trilogy said: “I’m against anything from age-ranging top inking and blueing, whose effect is to shut the door in the face of children who might enjoy coming in. No publisher should announce on the cover of any book the sort of readers the book would prefer. Let the readers decide for themselves.”

And author Laura Dockrill told the Guardian that the project as an “urgent campaign that everybody need to get behind.”

“Children should have the right to choose their own literature and we should be supporting them to carve their paths of interests instead of narrowing them. It is ignorant, old fashioned and ugly to isolate anybody from the beautiful freedom and escapism of the mind that reading for pleasure brings,” she said.

A spokesman from Waterstones told the paper, “Gender-specific displays are a definite ‘no’…if a shop ever goes off-piste and does one we soon find about it and get it removed…There’s no need for them and there are far more intelligent ways to display books.”

Among the titles the campaign is attacking are books such as “Usborne’s Illustrated Classics for Boys, described by the publisher as ‘a collection of stories of action, adventure and daring-do [sic] suitable for boys,’ while its Illustrated Stories for Girls contains ‘brand new stories about mermaids, fairies, princesses and dolls.’”

The publisher told The Guardian that it has “no plans to produce any titles labeled ‘for girls’ or ‘for boys’ in the future,” while Parragon told the campaign that “feedback on gender-specific titles is important to us” and “we have no plans to create new titles referring to boy/girl in the UK.”

In addition, Katy Guest, the literary editor for the Independent on Sunday has vowed not to review any gender stereotyped books, writing:

“…I promise now that the newspaper and this website will not be reviewing any book which is explicitly aimed at just girls, or just boys. Nor will The Independent’s book section. And nor will the children’s book blog at Independent.co.uk. Any Girls’ Book of Boring Princesses will to straight into the recycling pile along with every Great Big Book of Snot for Boys. If you are a publisher with enough faith in your new book that you think it will appeal to all children, we’ll be very happy to hear from you. But the next Harry Potter or Katniss Everdeen will not come in glittery pink covers. So we’d thank you not to send us such books at all.”

But taking the other side, also in the Independent, Michael O’Mara, whose company owns children’s publisher Buster Books, defended selling gender-specific titles such as The Beautiful Girls’ Colouring Book and The Brilliant Boys’ Colouring Book, saying that they are easier to sell than unisex editions.

“It is a fact of life how a very large percentage of people shop when buying for kids, do it by sex. We know for a fact that when they are shopping on Amazon, they quite often type in ‘books for boys’ and ‘books for girls,’ O’Mara told The Independent.

Responding to the Let Books Be Books campaign, O’Mara, a father of three, called it a “knee-jerk” reaction. “The proof,” he said, “is in the pudding.” “Our two best children books ever are The Boys’ Book and The Girls’ Book. The boys’ one included things like how to make a bow and arrow and how to play certain sports and you’d get things about style and how to look cool in the girl’s book. 2,000 people signed the petition [in the first day], but we sold 500,000 copies of The Girls’ Book. These statistics tell me I’m going in the right direction.”

He also defended his position by noting that nearly 90% of the books his company publishers are not “divided by gender, and that it is, in fact, mostly women who work in the children’s book division. “We would never publish a book that demeaned one sex or the other.”

In response, Megan Perryman from Let Toys Be Toys told the Independent, “By marketing books specifically at boys or girls, you halve your readership and alienate the many children who do not fit into neat boy/girl boxes.”

“We would be very surprised if evidence showed that gendered titles are more profitable, and we certainly haven’t seen this. Indeed, some of the best-selling children’s books don’t have gendered covers at all.”

Perryman also told the Guardian that while she is pleased with the response so far, that the campaign would “continue to approach those publishers and retailers, such as Buster Books and WHSmith, who persist in marketing books in this way,” adding that “this is not about banning books. This is about letting books speak for themselves without labels indicating who can read them.”