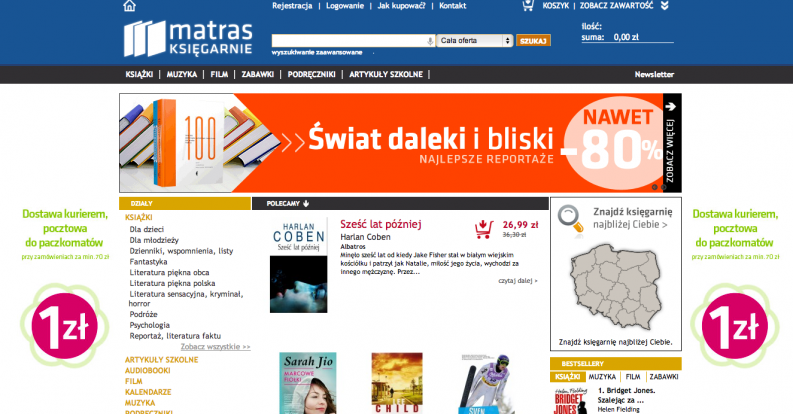 Poland’s Matras — the country’s second-largest bookstore chain — is set to be sold. Potential investors for the chain reportedly include book distributor FK Olejesiuk and a consortium of Polish publishers, led by Prószyński, according to the information obtained by Polish daily Dziennik Polski.

Jolanta Liżewska-Zyzek, the chain’s marketing director, confirmed that Matras is in talks with potential investors, but did not disclose their names. Local news agency PAP reported that four groups of investors are planning to place their bids for the bookstore chain.

Set up in 1991, Matras began its expansion in the Polish book market shortly after the end of Communism by acquiring bookstores from the former state-run Books’ House (Dom Książki) chain. With 172 outlets in 94 Polish cities, Matras is second only to local chain Empik which operates about 200 outlets in 104 cities, with 23 of these located in Poland’s capital city Warsaw.

Over the past few years, Poland’s bookstore chains have also significantly expanded their activities online. Their online operations compete with popular online retailers such as Merlin.pl and a rapidly growing number of Polish-language e-book stores.

However, consolidation efforts were hampered by the authorities. In 2011, Empik attempted to take over Merlin.pl, but the deal was blocked by Poland’s competition watchdog UOKiK in a bid to safeguard sufficient competition in the bookselling industry. Two years later, the Polish site was purchased by local retailer Czerwona Torebka, which previously was not active in bookselling.

As Matras is looking for an investor, local observers point to the problems faced by Polish bookstores. Jan Rodzim, owner of local publisher Aspra-JR, says that most small and medium-sized brick-and-mortar stores are struggling to stay afloat, and their financial woes is having a negative impact on the publishers’ liquidity.

“The times are tough, and settling the accounts between publishers and booksellers often takes more and more time now,” Rodzim said. “Most book stores are ran by small businesses, and it is difficult for them to compete both with big chains and online stores.”

According to Rodzim, while online bookselling has significant growth potential in Poland, piracy remains a major issue which needs to be jointly tackled by publishers, booksellers and the government.

“Without these joint efforts, publishing and bookselling will become an unprofitable business,” Rodzim said.