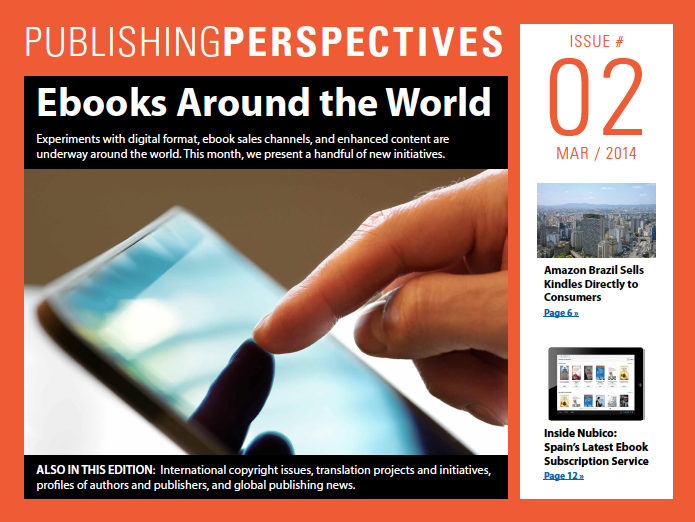 Our digital magazine for March focuses on ebook businesses and initiatives around the world, from sales to format, enhanced content to devices. Download this month’s issue here to read about ebooks, as well as other topics and trends in international publishing. Or read our previous issue on “Selling and Sales.”

This month’s letter from the editor:

The Ebook Revolution Marches On Consumers may see ebooks as simply another reading option, but in the publishing business, ebooks continue to be seen as a force of massive potential disruption and opportunity. Established markets, in particular, are pushing new, even more consumer-friendly business models. Take Spain, for example, where a coterie of major and local players, from Amazon, Google and Apple, to Casa del Libro, Fnac and El Corte Ingles, are locked in fierce rivalry for ebook buyers. Enter Nubico, a collaboration between retailer and book club operator Circulo de Lectores and telecom company Telefonica. Nubico is offering a competitively priced ebook subscription service for consumers, and an attractive royalty model for publishers.

Further afield, in the Arabic speaking world, Kotobi.com, a major new ebookstore, is finding early success and is taking on Neel wa Furat, the major incumbent, where ebooks currently represent some 10% of the bookseller’s annual revenue. Yes, you read it right: serious regional players are duking it out for the Arabic digital dollar — or dirham or dinar. How long will it be before Amazon takes notice and moves into the region? My guess: not long.

Amazon, as has been the case for the last decade, is the one company every would-be ebook entrepreneur in a developing market fears the most. When they entered Brazil at the end of 2012, they were on a level playing field against rivals that included Kobo, Apple and Google. But now they’ve pulled their trump card: distribution and direct sales of Kindle devices. It’s as if the company reverse-engineered the distribution problem that plagues a geographically huge country like Brazil, using the relatively low-risk, low-infrastructure, limited logistics ebook. Today they’re now only a step away from selling print to the nearly 200 million strong Brazilian consumer market.

And so, the revolution continues to march across the globe.

Each month Publishing Perspectives strives to bring you the most up-do-date, relevant and interesting book, publishing and media news, essays and editorial from across the globe. Have a story for us? Want to tell us how we’re doing? Get in touch. We’d love to hear from you.