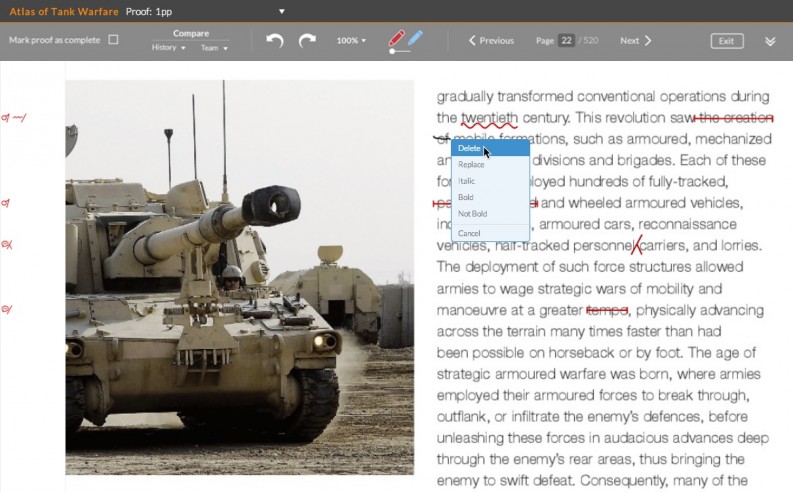 An example of Collate it in action.

Too often, the message is, “the software works like this so change how you work to match.” Back in the 1990s, when I got my first job as an editor, paper still ruled the earth. I learned to copyedit with multicolored pens on hard copy and to work on galley proofs. But a cataclysmic event led to the extinction of these dinosaurs: the emergence of on-screen editing.

It’s easy to forget now how big a shock this was to editorial workflows. There was huge debate and upset among editors, with great concern expressed that this would lead to a reduction in standards and would ultimately destroy the editor’s role.

Eventually most editors realized that working on a screen had big advantages. It was quicker and meant that the editor could automate many tedious tasks using search-and-replace or macros. Quality could actually be higher.

Microsoft Word became ubiquitous and, despite its many (many) problems, changed the face of our profession for the better. Along the way, the galley proof went extinct and few now mourn its passing — a legendary beast that is almost unknown even to many who have been in the profession for a decade.

“Too often, the message is, ‘the software works like this so change how you work to match.’”

One of the key lessons I learned was that change could be a good thing. And, over the past decade or more, it has surprised and annoyed me how little useful change there has been in editorial workflows.

After the huge but useful upheavals of the 1990s, the changes we have endured seem to be of a different kind. XML-first workflows, CMSs and web-based authoring tools bring advantages to other parts of the business, but make editors’ lives more difficult or tedious. Indeed, they can even reverse some of our earlier gains. XML editors usually lack sophisticated macro capability, and online tools usually lack all but the most basic search-and-replace functions.

Too often, the message is, “the software works like this so change how you work to match.”

Rise of the Editor

I do see signs of improvement on the horizon, though. Computers can (and should) be made to do the jobs we actually need doing. All businesses need to do is to establish what those jobs are — and actually put the effort in.

One area where a lot of work is being done is in the creation of ebooks and apps. Companies like Contentment are thinking about the mechanics of actually creating digital content in multiple formats.

But it’s not just digital outputs that need attention. Print products need the same care and attention. After all, most of our profits still come from those! This was a money-where-your-mouth-is realization for me — it’s all very well railing against the lack of useful tools, but how about doing something? So last summer, I founded Cambridge Publishing Solutions with the simple aim of making editors’ lives better.

Since then we’ve been building our first product, Collate it. This is designed to make the book proofing process easier. By bringing all that’s best about our traditions (like the simple, powerful, precise markup paper allows) with the best digital can offer (real-time collaboration, automated project management, improved accountability), we’re trying to give editors a tool that makes their lives easier.

If you’re fed up with trying to force tools into your workflow just because they’re the only available option, imagine a better world with tools that are actually designed for the jobs editors do. If you can’t build them yourself, find the people who are and work with them to deliver that new world.

Because surviving the apocalypse means being willing to evolve.