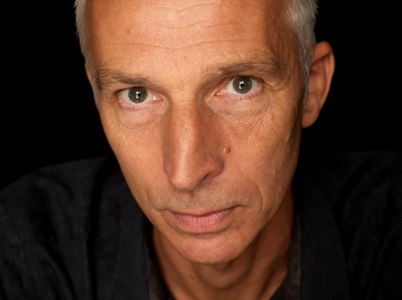 Rupert Thompson says “I don’t buy anything. No clothes, no luxuries. Nothing.”

Writing for The Guardian, Robert McCrum observes that “the credit crunch and the internet are making writing as a career harder than it has been for a generation.”

Take, for instance, Rupert Thomson. The author of nine novels, including The Insult (Bloomsbury), one of David Bowie’s 100 must read books of all time, Death of a Murderer (Bloomsbury) (shortlisted for the Costa Novel of the Year in 2007), and his latest Secrecy (Granta), which the Financial Times called “chillingly brilliant.”

“According to the Independent,” says McCrum, “No one else writes quite like this in England today.” In short, “he’s an established and successful writer with an impressive body of work to his name.”

But as McCrum writes, “After working seven days a week without holidays, and now approaching 60, Thomson, you might think, must be looking forward to a measure of comfort and security as the shadows of old age crowd in. But no. For some years, he has rented an office in Black Prince Road, on London’s South Bank, and commuted to work. Now this studio life, so essential to his work, is under threat. Lately, having done his sums and calculated his likely earnings for the coming year, he has commissioned a builder to create a tiny office (4ft 9in x 9ft 11in) at home in his attic, what he calls ‘my garret.’

It’s a space so small that Thomson, over 6ft, will only be able to stand up straight in the doorway. “All I want is enough money to carry on writing full time,” he told McCrum. “And it’s not a huge amount of money. I suppose you could say that I’ve been lucky to survive as long as I have, to develop a certain way of working. Sadly, longevity is no longer a sign of staying power.”

As McCrum describes the situation, Thomson isn’t exactly broke, but he’s certainly “up against it”:

“The story of his garret is a parable of literary life in Britain today. Every since the credit crunch of 2008 writers have been tightening belts, cutting back, and, in extreme cases, staring into an abyss of penury. ‘Last year,” said novelist Paul Bailey, speaking to the Observer in 2010, ‘was sheer hell.’ Off the record, other writers will freely confide their fears for the future, wondering aloud about how they will make ends meet. Hanif Kureishi, for instance, recently swindled out of his life savings, told me how difficult his life had become. Never mind the money, the very business of authorship is now at stake.”

Thomson told McCrum, “I don’t buy anything. No clothes, no luxuries, nothing. I have no private income, no rich wife, no inheritance, no pension. I have nothing to look forward to. There’s no safety net at all.”

McCrum believes that the turning point in the fortunes of British writers was in 1980. “The Booker prize was televised for the first time, and the subsequent year, Midnight’s Children won. After that, literary life began booming — a mirror to the irrational exuberance of the economy. Tim Waterstone’s bookselling revolution was transforming the trade. New writers were making headlines. In the feeding frenzy that followed, publishers’ advances entered a never-never land in which commercial prudence was thrown to the winds.”

But all parties have to come to an end. And Thomson can pinpoint the exact moment it happened for him. He was at a publishing event during the fall of 2008, and was talking with Lee Braxton, an editor at Faber & Faber: “He told me,” he recalled, “and not for the first time, how much Faber would like to publish my work. And then he said, ‘But I can’t afford you.’ So I asked him what he would pay, and he named a figure for a two-book deal. That was the first time I noticed the drop in advances because the figure that he gave was only a fraction of what I’d been getting up to then. I went home and sat at the kitchen table and drew up a balance-sheet. I thought: I’m going to have to change the way I live.”

“Thomson,” writes McCrum, “is a veteran from a now-deserted battlefield. Rates of attrition among so-called ‘mid-list’ writers, steady professionals who can no longer find publishers to support them, have begun to rise alarmingly. But drop a generation or two, and you find parallel stories: young writers grappling with a wholly new — and in some respects, hostile — literary landscape. In a business that relies on keeping up appearances, no one wants to admit this. Privately, there’s a lot of fear.”

For instance, there’s Joanna Kavenna, author of 2002s The Ice Museum, which won her a low six-figure deal from Penguin.

But that was when the publishing book was “just” as McCrum described it, in full swing. “My initial career conformed to my original notion of authorship,” she told the Guardian. “You wrote a book, you struggled to get it published, if you were lucky you found a kindly editor who paid you a bit of money, and later perhaps you’d be paid for another book. And so on. In the meantime you did other things like secretary work or journalism to make a bit more. But then, between 2007 and 2010, everything changed.”

What followed is a list of the problems facing all writers today: smaller book review sections; marketing departments “calling the shots,” the closing of libraries and bookshops, and “the dread march of Amazon.” And of course there’s the rapid growth and power of social media: Facebook, Twitter, etc., “i.e. internet sites where anyone can put up ‘free content,’ either for pleasure or self-promotion, or from a confused mixture of both instincts. Put these anxieties together and you have a picture of a way of life facing extinction. In summary, she said, “being a writer stopped being the way it had been for ages – the way I expected it to be – and became something different.”

To read the rest of the article and the role of copyright and the IT revolution, click here.