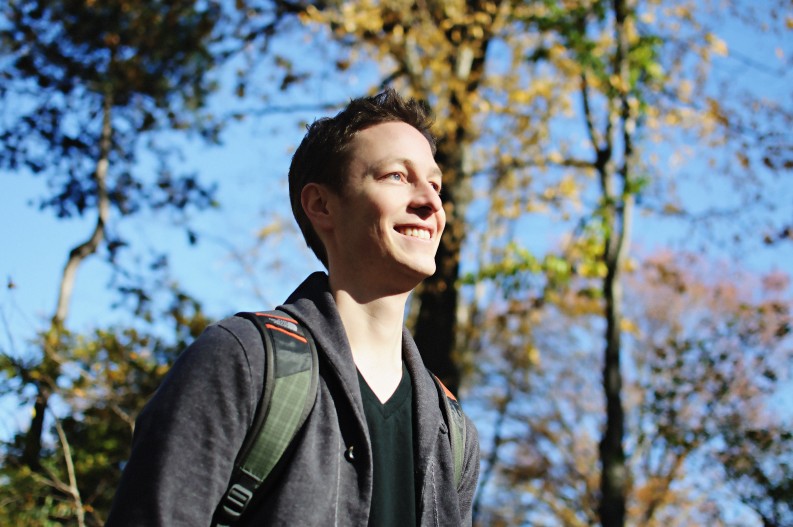 “…I think that fiction can be more useful as a window than as a mirror.”

Eliot Schrefer writes the kind of YA books I’m predisposed to like. Books that take me to another part of the world, that introduce me to the lives of young people I’d never get to know on my own, and that open me up to the world and minds of primates.

In his newest book Threatened (Scholastic), Schrefer returns to the Africa of his last novel, the National Book Award finalist Endangered, and introduces us to Luc, an orphan and debt slave who throw his lot in with a “professor” to go deep into the jungle to study and help to save chimpanzees. But when the professor disappears, Luc is forced to both fend for himself and join forces with the chimps to preserve their habitat.

One of the things I love about Schrefer’s book is that he doesn’t condescend to his readers, but instead plunges them immediately into a world very far from their own:

“I’d never seen a mock man until the Professor showed me one. I’d heard them, of course – many evenings the chimpanzees would scream within scream within the dark trees surrounding my village, their cries too strange for a person and too intimate for an animal. I still hear those shrieks, these years later. Whenever they got too loud, my mother and I would huddle on the floor of our hut, her arms wrapped tight around me. ‘This is why you must promise always to be home before Dark, Luc,’ she would whisper. ‘If you’re not, you’ll become one of the kivili-chimpenze.’ The mock men.”

In Threatened, Schrefer introduces young readers to the life of a young person in Gabon – a nation of great beauty and extreme poverty, a nation decimated by AIDS yet at the same time filled with hope. And somehow, he even makes his chimpanzees (including older brother Drummer and younger sister Mango) into living breathing characters:

“I was amazed that Drummer could be so tolerant of his sister’s presence and so blind to her at the same time. He’d sit on his haunches, stripping bark from liana, and she would lean against him, tongue between her teeth as she concentrated on her own vine, watching his movements and carefully mimicking them. Then, after hunching down to concentrate on a particularly difficult vine, she would look up and find her brother gone. She’d stand on two feet and pivot, making concerned squeaks. He’d have lurched away without her, and even with only three usable limbs would soon have wandered too far for her to catch up on her smaller feet. So she’s fall back on her second choice companion – me. She’d crouch in the dirt nearby as I sketched in the notebook or sharpened my knife. At time’s like that Mango’s sorrow at being left out was so present and full – an unfiltered version of a feeling I’d long ago learned hurt less when it was walled away.” I recently had the chance to talk with Eliot about Threatened:

PP: Could you tell me a little more about AIDS being called “the worm?” by the characters in the book? I confess I’ve never heard that before.

Schrefer: At some point while I was researching AIDS in Africa, I came across a list of all the various street names for HIV. Worm was among them, and it was the one I decided the characters in my book would use. The one truism of the story of AIDS in Africa seems to be that those who don’t work in medicine call the disease by anything other than its official name. I think it’s a defense, a way to redirect the illness a loved one has away from this awful scourge. It’s a way of looking sideways at something that is too terrible to face head on. Researchers on AIDS in Africa have to be trained what to look for in the death records while they’re putting their statistics together. To prevent shame on the surviving family, the cause of death is usually listed as the opportunistic infection—tuberculosis, pneumonia—that was the final cause of death, dodging the HIV part entirely.

One of the things I loved about your last two books was that you didn’t rely on a white character as the hero (or heroine) or as the audience’s “stand-in” as it were. You take a character that is already…foreign to the reader and then plunge him/her into a situation that is even more foreign. Is this intentional on your part? What has the response been from your readers?

I was really nervous! When I was writing Endangered I waffled. Was there something unforgivably presumptuous about I, a white man, writing from the point of view of someone mixed race, and African? While I was agonizing, I listened to a TED talk by Chimamanda Ngozi Adichie, about the peril of having “one story” about Africa. The danger of outsiders writing about Africa, she said, was that their stories contribute to the stereotypes of African life and don’t access the diversity of it. That freed me some — I realized that if I made my characters’ journeys specific to them and kept as far as I could from received notions about Africa, at least I wouldn’t be contributing to the “one story” problem. It’s not like having a white main character would have been “safer,” after all; so frequently in children’s literature about Africa there’s a well-meaning white savior coming in and saving animals by correcting benighted local people. Creating another story that contributed to that mythology would be the worse sin, I think.

Also, I think that fiction can be more useful as a window than as a mirror. To assume readers only want to read about people like themselves is doing them a disservice, I think.

Chimps. They were largely the bad guys (apes?) in Endangered — did you feel a sense of responsibility to show their “good” side? And where did your interest in primates and primate preservation come from?

Oh, those chimps. One peril of friends knowing I write about apes is that I receive a lot of stuffed animals as gifts. And I just can’t throw them away—it would feel awful. The result is I have a few stuffed chimps. One is called Chester, and he’s pretty rough around the edges. A bit of a bruiser. But also very likable. Jane Goodall is what brought me around to the chimps. Her memoirs are my best reading experience of the last few years. She traces the stories of generations of chimpanzees, and watching them grow up, find glory or loss over the years, brought me fully and completely into their world.

I got into primates by accident, when I bought a pair of Bonobos pants and Googled the name. Ever since I’ve been transfixed. I think it’s that the great apes show the same range of feeling as humans, but without the mediated sense of self humans have. There’s a purity and intensity to them that I find fascinating.

Threatened and Endangered are both very different from most YA books — they’re not dystopian, they’re not stories of young love or otherwise tormented American teens. They’re set in a real world (as opposed to fantasy/dystopian) that most readers (I’m guessing) are unacquainted with. I’m not sure there’s even a question here, but what are your thoughts on this?

To be honest: I’m not particularly interested in romance. It’s a big part of many people’s lives (mine included) but I think it’s overplayed in our culture. Listening to pop music, you’d think teenage humans did nothing else in the world but fall in and out of love. Where are the ballads about a first job? Losing yourself in a hobby? Rescuing a pet? We’re all drawn into romantic tales, but when they’re all teens read, I think they can be damaging—they teach them that the most important event in their lives will be finding someone to love them. It contributes to the “waiting for my prince to come” mentality. I find it self-defeating. I’d rather write about the other sides of life.