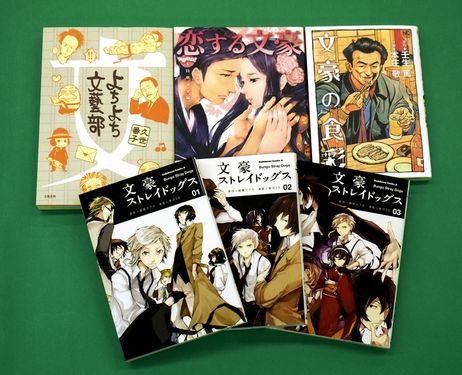 Writing in The Asahi Shimbun, Kensuke Nonami observes that, “Literary giants have often been used as subject matter in manga, but nowadays, an increasing number of manga are focusing on the more mundane aspects of the great writers, such as their affairs of the heart and gustatory adventures.”

It is, to say the least, an interesting phenomenon.

And while there have been long-time classics of the genre such Natsuo Sekikawa and Jiro Taniguchi’s The Times of Botchan, which looks at the life of novelist Soseki Natsume, new series such as Koisuru Bungo (Literary Giants in Love) take a more direct approach, examining in particular the romantic lives of Natsume, Ogai Mori, and others.

One story in the omnibus tell the story of a famous episode in the life of the great Japanese author Junichiro Tanizaki, who is said to have encouraged his wife to have a relationship with his fellow writer (and close friend) Haruo Sato. “Literary giants may sound like a difficult theme,” he said, “but they get swept away by romantic feelings just like young people nowadays. We wanted readers to feel close to the great writers by describing their contradictory images.”

It’s interesting to note that the series is targeted towards girls and women, and because of that the characters are drawn in what is known as the “kyun-kyun” style. According to Nonami, “Kyun-kyun is a term used by young girls, and is compatible with ‘moe,’ which is used by young men to describe a feeling or attraction for cute fictional anime or manga-type characters.”

Another series making an impact is Nihonbungeisha Co.’s Bungo no Shokusai (Literary Giants’ Gourmet Foods) which, seriously, “highlights the favorite foods of Japan’s great men of letters.” The manga looks at food as featured in the books of six Japanese authors, including Shiki Masaoka and Kafu Nagai.

But, Nonami says, the most unusual of the manga titles featuring Japanese literary superstars is Bungo Stray Dogs, (Kadokawa) which features characters “modeled after the widely accepted images of great writers, incorporating them in a wild fantasy story.”

The story is about a “vendetta” between a detective agency that boasts members including Osamu Dazai and Ryunosuke Akutagawa “and other members of a port mafia family over Atsushi Nakajima, who can transform into a human-devouring tiger. The characters are named after Nakajima, Dazai, Akutagawa and other famous faces from Japan’s literary world and use special powers inspired by their representative works and personal traits.” (One of the other characters is named after novelist Rampo Edogawa, who, while best known for his erotic stories of mystery was also known for his “Boy Detectives” series of mysteries for children, thus making Bungo Stray Dogs a kind of meta-manga.)

Series editor Hirotsugu Kato, says that the three volumes (to date) of Bungo Stray Dogs has more than 500,00 copies in print, and that the majority of readers are female, “possibly because the manga features more male characters than female characters.”

“It has been criticized for being far-fetched,” he admitted,”…but it makes me glad when I hear that young readers who had never read or been interested in the great writers’ works say they now tread their representative works.”

“Works that feature characters inspired by feudal warlords and historic figures who played important roles in the end of the Edo Period (1603-1867) (and contributed to the Meiji Restoration in 1868 that transformed Japan into a modern state) have become widely accepted in manga and video game titles,” Kato said. “Bungo Stray Dogs is a work of fiction created after we gave much thought to a genre that was familiar to Japanese people and whose characters had not yet been introduced in a caricatured manner. Maybe because they are historic writers who lived in an adequate span of time, the creators can use their imagination easily.”