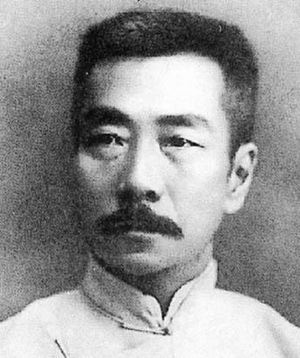 Lu Xun, one of China’s most venerated writers, got his start translating Jules Verne.

The genre, he noted, has experienced a roller-coaster of ups and downs, largely due to the fact that the Communist Party literary establishment thought of it as a “suspect form” for most of the last fifty years. But now, he says, it’s on a quite a roll.

“Science fiction novels are selling briskly in China. Foreign specialists in Chinese literature, only a few of whom paid attention to the genre twenty years ago, now routinely take it seriously as a subject for scholarly attention. And Chinese SF has become so mainstream that the official Xinhua News Agency even found a way to bring practitioners of the genre, such as bestselling author Liu Chixin, whom they described as ‘one of China’s most celebrated sci-fi writers,” into their campaign to use the lunar breakthrough to buttress national pride. The December 17 Xinhua article ‘Chinese sci-fi writers laud moon landing,’ not only quotes Liu and other SF authors on the accomplishments of the country’s space program but also reminds readers that Lu Xun, the country’s most venerated modern literary figure, began his career by translating works by Jules Verne and wrote in 1903 that science fiction could play a crucial role in ‘the advancement of the Chinese nation.’”

Lu Xun’s quote is from the introduction to his translation (translated from an earlier Japanese edition) of Jules Verne’s 1865 novel A Journey from the Earth to the Moon, which predicted that Americans would take the lead in exploring the moon. Lu’s interest in foreign SF was sparked by writing on the genre by China’s “most famous progressive intellectual of the day, Liang Qichao.” Liang was fascinated by sci-fi’s ability to introduce readers to new technologies and new ideas, and in 1902 made his own contribution to the genre, “The Future of New China,” a story set in a 1962 version of Shanghai hosting the first-ever Chinese World’s Fair.

Many consider Liang’s story to be the first work of Chinese science fiction. Others, though, give the title to the story (written by an unknown author) “Tales of the Moon Colony,” which given its title, was, not surprisingly, hailed in the December 17 Xinhua article as “the nation’s first modern science fiction story,” which went on to say that it “marked the beginning of generations of Chinese sci-fi writers’ lingering attachment to the moon.”

Of course Xun and Qichao were not the only Chinese intellectuals to become fascinated with science-fiction. Lao She, best-known for such realistic novels as Rickshaw Boy, also surprisingly wrote one science-fiction novel, Cat Country, which takes place on a Mars populated by “feline-like humanoids” and is narrated by a Chinese astronaut. As Wasserstrom describes it, “His craft crashes into the planet, killing the other member of his crew, and, after a series of adventures with the Martian Cat People, he is ferried back to earth by – in a nod to Verne, perhaps – a French rocket.”

But while China’s original “golden age” of science may have begun early in the last century, Wasserstrom notes the nice symmetry in play that its second one started around the beginning of this one.” Following are some recent noteworthy publications: Pathlight, a Beijing based periodical that specializes in literary translation, devoted most an issue to new works of Chinese SF.

Tor Books has announced that it will bring out an English language edition of Liu Chixin’s The Three Body Trilogy, a series that has solve over 400,000 copies in China.

And as Wasserstrom notes, an excellent starting off point in exploring Chinese sci-fi “would be The Fat Years by Chan Koonchung, a writer who began his career in Hong Kong and later moved to Beijing. The Fat Years, which is often described as a Chinese counterpart to 1984 but also contains Brave New World-like elements and a shout out to Aldous Huxley, came out in 2009 in Taiwan and Hong Kong and then in an English language edition two years later. Banned for sale on the mainland, where the author continues to live, it is set in a China of the near future (well, of today, as the setting is 2013), where the water supply has been laced with a bliss-inducing drug that keeps most people from questioning the authority of an all-powerful Party. One key plot element is that the authorities have managed to make nearly everyone forget and squelched discussion of traumatic events of the recent past.”

Wasserstrom concludes, “Chan was not among the Chinese authors whose opinion on the lunar landing Xinhua reporters sought. And if the 25th anniversary of the 1989 massacre that put an end to the Tiananmen Square protests comes and goes without public commemoration in Beijing next June, as seems very likely, we should not expect them ask him, or any other Chinese author, how that curious fact fits in with their works of speculative fiction.”