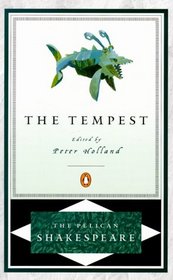 We’re approaching the end. For the past two years (and more), Publishing Perspectives has been examining the complete plays (and some of the sonnets) of William Shakespeare on our site The Play’s The Thing. And this weekend we’re beginning our reading of the last play he wrote on his own, The Tempest.

And while the play is one of Shakespeare’s most cherished works, at the same, it can seem his most abstruse, and even at times unfathomable. Is the play an allegory of divine learning? Is it the story of a colonizer of a territory of an island not his own, who enslaves its population and forces them to work as servants while he and his daughter enjoy a life of leisure? Or, it is simply Shakespeare’s swan-song to the theater, with Prospero “drowning” his book at the end of the play just as Shakespeare, soon after writing the play, turned his back on the stage and returned home to Stratford. But any way you read it, the play is still a magical experience.

“It may well be that Shakespeare in ‘The Tempest’ is telling us for the last time, and consciously for the last time, about the world. But what he is telling us cannot be simple, or we could agree that it is this or that. Perhaps it is this; that the world is not simple. Or, mysteriously enough, that it is what we all take it to be, just as ‘The Tempest’ is whatever would take it to be. Any set of symbols, moved close to this play, lights up as in an electric field. Its meaning, in other words, is precisely as rich as the human mind, and it says that the world is what it is. But what the world is cannot be said in a sentence. Or even in a poem as complete and beautiful as ‘The Tempest.’”

Join in the conversation here.