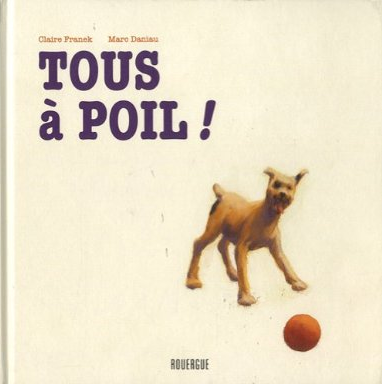 The domestic political system in France is under strain these days and this is spilling over to the area of children’s books where far right wing groups and most recently the country’s mainstream opposition leader, Jean-François Copé, are attempting to have certain books censured.

On a television show last Sunday Copé fiercely denounced a 2011 children’s book called Tous à poil (Everybody gets naked), saying it made his blood boil. In the book, various people (the baby, the babysitter, the neighbors, the teacher) get undressed in order to go swimming in the sea. Copé claimed the book was a recommended to teachers by the government for use in primary schools and asked how teachers could be expected to be figures of authority if they were naked in the book. He went on to use the book as an example of how the current government was pursuing a certain ideology.

The authors Claire Franek and Marc Daniau said they had written the book three years ago in order to show real bodies in natural situations from a child’s everyday life to counter the numerous images of bodies, often undressed, altered by Photoshop or plastic surgery, that are shown in ads or on the covers of magazines.

Le Monde newspaper pointed out that the book was not on the “official” list of books recommended for primary school as Copé stated, and that at the time of publication had not elicited any negative reactions and went on to win a prize in Belgium for best children’s book. While the issue of children’s book banning is familiar to the American public, it has been until now, rare in France. But French trade magazine Livres Hebdo reported that a far right wing collective has been going around to public libraries and assembling lists of books that they are calling immoral and asking them to be removed. Some of these books include titles such as Tango a deux papas et pourquoi pas? (Tango has two fathers and why not?) and La princesse qui n’aimait pas les princes (The princess who didn’t like princes)

The Culture Minister, Aurélie Filippetti promptly condemned the pressure being exerted on thirty or so libraries and stated that: “reading is one of the best tools to combat fanaticism.”

The association of librarians in France issued a statement as well, saying it wished to express its “profound disagreement with these partisan and extremist positions.”

Teacher and comic book illustrator Martin Vidberg who has a blog on the newspaper Le Monde’s site invited illustrators to post drawings on the theme of Tous a Poil for Valentine’s day. You can take a look at the results online here.

In the meantime, the old saw about all publicity is good publicity seems to have been proven again: on Wednesday, Tous a Poil hit #1 on the Amazon.fr bestseller list.