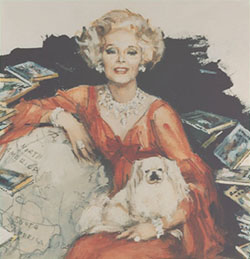 This article is a part of a series on print-on-demand, sponsored by Ingram Content Group. In a digital world, what does “out of print” mean?  With the option of print on demand, publishers have been able to eliminate warehouse costs by storing book files digitally and only printing a copy when a customer orders a book. What print-on-demand also offers is the ability to bring books that have been out of print for decades back into circulation and for new readers to discover authors that have long since passed.

Last summer, Hachette Livre partnered with the National Library of France to offer print versions of titles from the fifteenth to nineteenth century that are featured in the National Library’s digital library. More than 65,000 titles in the categories of art, literature, history, philosophy, religion, medicine, genealogy, and spiritualism were made available. These titles were selected by Hachette Livre on information from librarians and booksellers on what would be the most popular or most in-demand topics. These long forgotten, out of print titles are available for purchase worldwide. Through this initiative, more non-English work will be available to readers via print on demand than ever before. You can find the titles available here.

In addition to ancient or classic texts being revived for a new audience, print-on-demand also allows entire libraries of books by a single author to be reprinted for discovery by a new generation. Dame Barbara Cartland wrote 644 romance novels in her long and prolific career. Called by Vogue, “The true Queen of Romance,” Cartland specialized in Victorian romance and published her first book, Jigsaw, in 1922. She died in 2000, leaving behind an incredible library of her work.

UK publisher M-Y Books, run by Cartland’s son Ian McCorquodale, has had a stunning success with publishing Cartland’s romantic novels in ebook format, Ingram’s e-book distribution platform, CoreSource. The first ebook was published 30 months ago and she now has 196 titles available around the world with still hundreds more to come. But, for much of her audience, they would prefer a print product. Here’s where POD plays an important role in bringing those titles, many of which were previously unpublished, to the public.

McCorquodale shared his feelings about his mother’s books being back in “print,” either via ebooks or in print, via print-on-demand: “Many of Barbara’s fans collect her books and read them again and again. When they are feeling depressed, tired and the children are out of control, they take their favorite Barbara Cartland paperback down from their bookshelf and read the last chapter again when everything works out right, there is plenty of love and the hero takes the heroine into his arms – then they retire to bed with a nice warm feeling and the world is not such a bad place after all. Thank goodness for good old-fashioned POD.”

Jonathan Miller, Managing Director of M-Y Books, said, “We have a had a very positive response to the republication through POD from both retail and online, with the titles shipped directly via Lightning Source. In addition, orders have increased greatly from Gardners and other wholesalers. In Australia, we have noted new business as the title availability has increased and we hope to do the same in South America with the titles [we are publishing] in Portuguese.”

By having the print on demand editions of Cartland’s work available, M-Y Books has seen an increase in the discovery of these books in new markets and by new readers. “We have seen a rise in Print sales of 300% from the previous year but expect even greater sales growth this year, both in new markets and established markets,” said Miller.