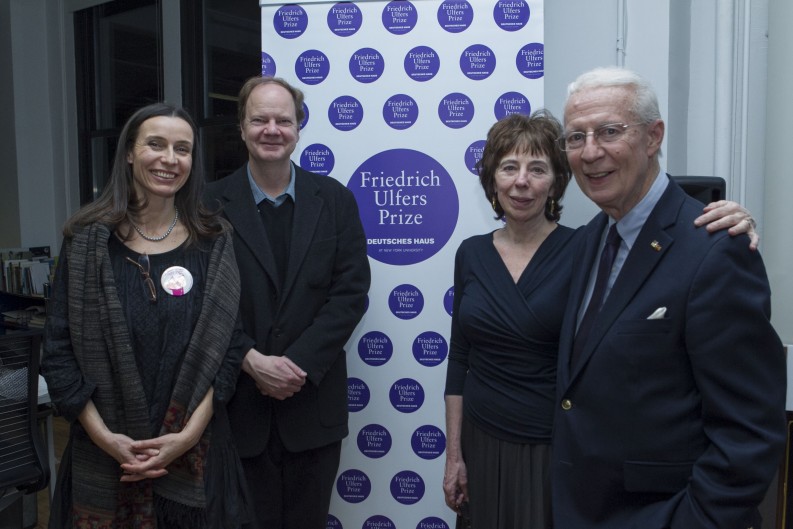 Metropolitan Books publisher Sara Bershtel, this year’s winner of the Friedrich Ulfers Prize for advancing German literature in the USA, was honored on February 27 with a reception and speech written by German author Christoph Hein. Philip Boehm translated and delivered the speech at the reception, which also kicked off this year’s Festival Neue Literatur. We have come together to honor Sara Bershtel and to thank her. To thank her for helping this country re-open the way to another, to a nation that in the last century became the terror of the planet, that cut itself off from all civilized societies, and caused the whole world to turn away from German language and culture, and to spurn the cultural achievements of an entire nation.
Sara Bershtel has helped heal this break by championing the literature of this nation that was ostracized because of its past. Literature has the ability to open paths and rebuild bridges. It is able to do this when there are people who are its champions.

Over twenty years ago I traveled to China for the first time and then to Japan the following year. In both countries I worked as a visiting professor. I had long felt a special connection to those places on account of their culture and history, but I had put off traveling there: I didn’t want to visit as an admiring tourist gazing this way and that—I was after a more intense, more exact encounter, as part of a working relationship. My hunch proved correct: sharing a house with Japanese or Chinese colleagues, working together in one space, opened up much for me that I might not otherwise have understood or even noticed. Because as close and familiar as their culture was to me, it was not my own, and there was much that would have remained alien to me had I set off traipsing about the country with no counsel or guidance.

Before the trip I started boning up on the top travel guides, which told me what places I had to see, which mistakes I had to avoid, and which European custom constituted an unforgivable faux pas in these faraway places. But I soon realized that there was a better resource, one which provided much greater access to the people and their everyday culture than the highly praised and constantly updated tour guides—and that was Chinese and Japanese literature, belles-lettres, philosophy and the works of the historians that had interested me for decades. These books did a much better job of opening the way and provided me a far more accurate approach to the places in question. Lu Xun and Akutagawa had made their countries and the distinct cultures accessible to me, they had made the strange familiar and exposed the essential, underlying layers, the forces that had shaped land and people over the course of centuries. I understood because I knew the literature, I understood because translators and publishers had opened up this distant and at first glance enigmatic continent for me. Something I’ll never forget: at one of the Beijing universities I shared an office with two Chinese colleagues. Both had been involved in the Cultural Revolution that had shaken China twenty years earlier: one as a perpetrator—to put it briefly—the other as victim. I was hard-pressed to understand how the two of them could work together as lecturers ever again, and share an office in the bargain. My European colleagues told me that it was impossible to discuss these things with them, that neither man would talk about it, that they wouldn’t share any information about that period with us white Europeans. So I turned to the great author Lu Xun, and he helped me engage them in conversation. His depiction of ordinary life in China a hundred years earlier, his description of his fellow countrymen, their attitudes and behavior, the everyday philosophy of the little people helped me find a bridge to their descendants, and to a conversation about a past that was burdened with shame.

On another occasion, when I was a guest professor at an American university, a particular student caught my attention because of his accomplishments in my course on German and German literature. Talking to him I learned that he had no intention of pursuing a career in this field—he was a computer specialist and had decided to complete a two-year study of German literature because his company was sending him to Germany, and he wanted to learn more about his future host country than just the language. He hoped that German literature would help him better understand the Germans themselves, which would be useful for his work and good for his business.

Literature opens worlds for us and allows us to understand nations; literature can reveal the deepest recess of a landscape, of a mentality. And this is Sara Bershtel’s longtime endeavor. She has worked to reveal to her fellow Americans this strange, unusual and irritating country Germany, this culture that over centuries had made a name for itself—a name that a few years of Nazi barbarism destroyed for a long time, perhaps forever, all on its own. She has worked on behalf of a literature that after the Second World War met with rejection not only in America. And she did this despite the fact that she and her family had been forced to flee Europe to get away from the persecution they had suffered at the hands of Germans.

If the people of this planet truly wish to unite as nations, if we want to stop dividing the world into first, second and third, if we desire to overcome the prejudices we hold so dear against all that is other—other nations, other religions, other lifestyles—then we need broadminded, insightful advisors–and great-hearted people—to open the way. People like Sara Bershtel.
Thank you, Sara.