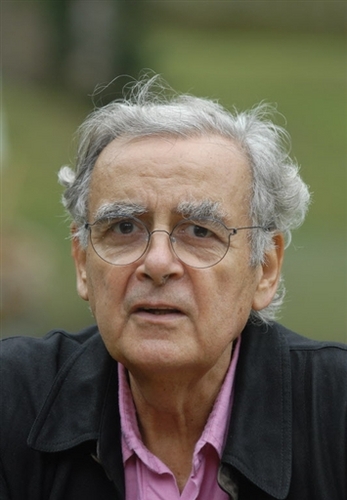 Bernard Pivot is the new president of the Académie Goncourt, a perfect role for “the best informed man on what is happening today in the world of books in France and even abroad.” For most people in France over 30, Bernard Pivot is a household name. The journalist’s prime-time literary talk show, Apostrophes, began in 1975 and ran for 15 years during which he discussed books and writing with Marguerite Duras, Marguerite Yourcenar, JMG Le Clézio, Vladimir Nabokov, Milan Kundera, Paul Auster, Alexander Solzhenitsyn, or Charles Bukowski, who in a now classic scene had to be led off the set in a drunken state.

His cultural show that followed, Bouillon de Culture, ran for another 10 years. Now, in what can be seen as a culmination of a lifetime career in the world of books, early last month, Pivot became the new president of the 100-year old Académie Goncourt, the literary organization which each year confers one of France’s most prestigious book prizes. He replaced the 92-year old author Edmonde Charles-Roux, who said of Pivot: “Could we have hoped for anyone better? Our new president is the best informed man on what is happening today in the world of books in France and even abroad.”

Pivot brought his passion for writers and their books to his audience with a fresh approach that author Jorge Semprun attributed to the fact that he had not gone to university. (Pivot has said that his higher education was ongoing with an exam on Fridays when he moderated his television programs.) Audiences loved his down-to-earth approach, he was modest, without ever being fawning, he was a man of the “terroir;” who loved his wine, as well as soccer. For over thirty years Pivot did his homework, and was always thoroughly prepared for his subject, keeping calm and never losing his sense of humor. He recently revealed that he was often nervous before a show, and that he kept a chestnut in his pocket as a sort of talisman that he found soothing to touch.

“The only moment when I don’t read is when I’m in bed. There, I either sleep or make love…”

Pivot’s love of words before he discovered books is well documented—the son of grocers from Lyon, he spent the years during the Second World War in a small village in the Beaujolais area where the two books available to him were Les Fables de la Fontaine (Lafontaine’s Fables) and Le Petit Larousse, an encyclopedic dictionary, which he read, jotting down words in a small notebook. Pivot has often said he fell in love with words before falling in love with literature, and indeed, two of his recent books were built around words: an autobiographical definition of words that were important to him in his life called Les Mots de ma vie (The Words of my life) in 2011, and last year’s Les tweets sont des chats (tweets are like c[h]ats). The 78-year old Pivot loves to tweet, (he has over 200,000 followers) and dedicated his book to his editor in chief at the Figaro Littéraire, who taught him to be concise.

Pivot had been a member of the Goncourt jury since 2005, and said of his job as president, “my new title is an honorary one, still I am very proud of it.”

When asked a few years ago by a journalist about continuous allegations that the Goncourt prize was usually decided beforehand in collusion with major French publishers, Pivot answered that he had made several reforms and that today there were fewer antics going on than in the past. Former jury member and author Jean Giono, he recounted, apparently never read any of the books on the Goncourt list and the morning of the prize would call publisher Gaston Gallimard to ask him whom he should vote for.

Pivot’s role now requires more public appearances than when he was simply a jury member but he still has to read a large number of books over a five-month period before the Goncourt Prize has been decided—an occupation that brought him back to the beginnings of his career, when he read incessantly, at first as a literary journalist, and then when he began hosting Apostrophes. Pivot, who has often said he was hired as an intern at the literary section of the Figaro newspaper by pure chance when the editor found out he was from the Beaujolais region, recounts how he had never been a real reader before. “That day was an eye-opener for me and I began reading frenetically, everywhere I went; I always had a book with me. The only moment when I don’t read is when I’m in bed. There, I either sleep or make love…”

When Pivot decided to stop his highly successful Apostrophes program it was partly because “I spent my life at home reading, and I was looking forward to leading a normal life, it was an egotistical desire to have a wider cultural lifestyle.”

Bouillon de Culture enabled him to talk about art and film as well as books, but Pivot said that he returned to a more literary format when he saw that bookshops began to enter a difficult period. Pivot continues to worry about bookshops: “Today, the book world is much more fragile than 20 years ago. Many bookshops are disappearing; Internet book sales are hurting them. At the same time this is modernity.”

Still, he said, the same amount of books are published. “We continue to be in a period of reassuring abundance.”

As far as e-books are concerned, he has read a few, but “I need to turn a book over in my hand, I need the sensuality of a book. I understand very well that one might want to read in both forms. I tell young people that the most important thing is that they read.”

Pivot said that he is mulling over what to write about in his next book. “I’m at an age when you can’t afford to make a mistake. It might be a book about aging, or about love or about publishing…”