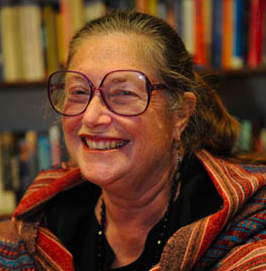 “Why should a publisher as powerful as Penguin give into the antics of a few malcontents?” Writers are rallying to support Wendy Doniger (pictured) after copies of her book were recalled and destroyed by Penguin India.

One week after news broke that Penguin Books India had agreed to recall and destroy all copies within India of Wendy Doniger’s The Hindus: An Alternative History, the negative fall out at what many see as the publisher’s caving in to extremist demands, continues.

Penguin Books India released a statement on the issue:

“Penguin Books India believes, and has always believed, in every individual’s right to freedom of thought and expression, a right explicitly codified in the Indian Constitution. This commitment informs Penguin’s approach to publishing in every territory of the world, and we have never been shy about testing that commitment in court when appropriate. At the same time, a publishing company has the same obligation as any other organization to respect the laws of the land in which it operates, however intolerant and restrictive those laws may be. We also have a moral responsibility to protect our employees against threats and harassment where we can. The settlement reached this week brings to a close a four year legal process in which Penguin has defended the publication of the Indian edition of The Hindus by Wendy Doniger. We have published, in succession, hardcover, paperback and e-book editions of the title. International editions of the book remain available physically and digitally to Indian readers who still wish to purchase it. We stand by our original decision to publish The Hindus, just as we stand by the decision to publish other books that we know may cause offence to some segments of our readership. We believe, however, that the Indian Penal Code, and in particular 295A of that code, will make it increasingly difficult for any Indian publisher to uphold international standards of free expression without deliberately placing itself outside the law. This is, we believe, an issue of great significance not just for the protection of creative freedoms in India but also for the defense of fundamental human rights.”

Even so, The Times of India reports that Penguin authors Jyotirmaya Sharma and Siddharth Varadarajan have asked the publisher to withdraw their books and destroy them.

“The reply by Penguin citing the compulsions it has in respecting the law of the land is deeply unsatisfactory. Unjust laws have to be fought and challenged, especially if these are applied and enforced selectively. There was a time when writers, publishers and readers performed this role of challenging the insolent might of unjust regimes and unreasonable laws. It doesn’t seem to be the case any longer. In order to register my protest, I demand that my two books, published by you, be withdrawn and pulped,” Sharma wrote in an email to Penguin’s Chiki Sarkar.

“If my request is overlooked of dismissed citing arguments from the contract I have signed with Penguin, I will, then resort to legal recourse, especially since I believe that my books published by you are grave threats to Indian law as interpreted by you and to the safety of your colleagues and employees.”

In his email, Varadarajan wrote, “…I no longer have the confidence that Penguin will stand by my book, Gujarat: The Making of a Tragedy – published by you in 2002 – in the event that some group of individual should decide to demand that it be withdrawn because the feel it violates 295 (Section of the Indian Penal Code). Accordingly, I would be grateful if our contract is cancelled, all remaining copies of my book with you are pulped, and copyright for the book is reverted to me so that I may freely distribute it electronically without the fear of any future, arbitrary withdrawal by Penguin in the face of pressure from the sort of intellectual bullies who have managed to have their way with Prof. Doniger’s book.”

And at dnaindia.com, Shuudhabrata Sengupta and Aarti Sethi sat down for an interview concerning the legal notice they filed against Penguin Books India. Among the highlights:

“Quite frankly, we find this decision mystifying given that Penguin has had a very good track record on defending freedom of expression. Internationally, Penguin Books has not caved into threats against the publication of The Satanic Verses, and if they can stand by The Satanic Verses and Salman Rushdie (as they should) we do not understand why they should not uphold the right of readers to read Wendy Doniger. Further, The Satanic Verses was proscribed by the Indian state, not pulped by Penguin books. So in that case we could sympathize with the publisher, which was as much a victim of a State imposed gag as the reader. But in this case there is no government or court order, only the implied threat of private litigation. Why should a publisher as powerful as Penguin give into the antics of a few malcontents?”

“..Penguin Random House is one of the most powerful publishing houses in the world. This means that if and when things get dark we expect it to marshal the resources (which it has) and the courage (which it sadly has not) to defend its authors and titles.”

“Open access publishing is definitely one of the answers. Though certainly not the only one. Open access publishing, or placing texts in the public domain means that the rights of a public to read also protect the rights of an author to write and publish freely. That is why we are asking Penguin to restore to the public domain, the title they have decided to pulp, so that anyone (with the author’s consent) can publish and circulate it, in the great public interest.”

“As publishing houses merge and become gigantic corporations, they appear to be hurting more than guarding and enriching freedom of expression.”

“…Indian copyright law had admirable exception clauses and provisions for freedom to reproduce the contents of a publication for educational purposes. The big publishing lobby has been fighting hard to change this. A lot of noise is now being made about how bad the laws pertaining to freedom of expression are in India, and that it is the legal environment, not publishers, who are to blame for books being pulped as a result of out-of-court settlements. And yet, until now, we have not heard of any publishers, or publishers trade bodies lobbying the government or lawmakers to change the law to allow for a more liberal publishing environment. Penguin is now putting out that it is a victim of a repressive legal framework. But it has not been proved that publishing The Hindus: An Alternative History has broken any law. Had Penguin actually followed through on Sarkar’s words [In October 2012, Chiki Sarkar, publisher at Penguin India, said “I am increasingly thinking that we should take the next injunction we are faced with and really fight it out.”] namely to ‘really fight it out,’ in the courts, the subsequent judicial decision might just have gone in their favor and that would have been a landmark decision for freedom of expression in this country. Sadly we will never know; as in this case Penguin has entered into an out-of-court settlement with a bunch of thugs without even waiting for a court decision. As Arshia Sattar, translator of Valimik’s Ramayana and a Penguin classic has said, ‘Penguin has succumbed to the undercurrents in the air that encourage us to censor ourselves. Even before we are asked to do so.’ Had Penguin been concerned about the repressive nature of Indian law, it would have made efforts to involve authors, readers, intellectuals and others to build a consensus favorable to freedom of expression, so that pressure can be put on lawmakers. That no publisher has so far done so, even as they have all argued for stricter intellectual property law, is revealing.”