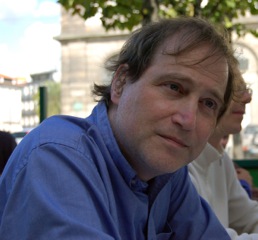 Exprima Talks, led by Corey Pressman of Exprima Media and conducted for Publishing Perspectives, is a series of discussions with people thinking and tinkering in the space of reading.

In this interview, Corey Pressman of Exprima Media poses a series of talking points, or prompts, to Mark Bernstein, about the current state of reading and where our digital content consumption is headed.

Bernstein is chief Scientist at Eastgate Systems and the designer of Tinderbox, the tool for notes. Since 1982, Eastgate has published original hypertext fiction, nonfiction, and poetry. His is the author of The Tinderbox Way and co-editor of Reading Hypertext. A graduate of Swarthmore College, he received his doctorate in Chemistry from Harvard University. MB: Absolutely. The link is the most important new form of punctuation since the comma. Links are already transforming serious writing and thoughtful reading. Links make manifest the way texts relate to other texts, the way the structure themselves, and the way they restructure our thinking.

Much of the conversation about links — The Gutenberg Elegies, the silly concern that Google will make us all stupid — is based on our most superficial anxieties about kids today, which is to say about ourselves. When middle-aged people with kids and mortgages complain that the kids are too easily distracted, they’re often simply echoing their own distraction. We say that electronic media has ruined kids’ attention span because they don’t pay enough attention to us: they’re too busy reading 5,000-page novels like Harry Potter and watching 100-hour movies like Buffy, The Vampire Slayer.

The exuberance of links is exhilarating, but we’re only beginning to really understand the rhetoric of links. Current writing may eventually seem like the poetry of the early Tudor period or the prose of the Restoration: overly concerned to be correct and orderly, but visibly gathering itself for Shakespeare and Milton, for Boswell and Austen.

MB: It’s an interesting web application. It thinks it’s intended for plot-centered hypertext narrative, but of course it can be used for a variety of interesting hypertext stories. It’s free and it’s easy to understand, and it’s gathered a nice community around it.

It’s not clear that Twine’s design fully appreciates the crucial role that Storyspace guard fields play in structuring large hypertext narrative. Cycles are terribly important to hypertext: they’re the way we perceive hypertext structure. Guard fields were an indispensable tool for letting writers use cycles without leading readers around in endless circles.

Storyspace uses guard fields to selectively enable some links and disable others. Guard fields can take into account both the reader’s past trajectory through the hypertext and the reader’s current selection. In effect, we can say:

Guard fields can serve as episode boundaries, but they can also be invaluable for managing small hypertext patterns.

Now, guard fields aren’t the only or even the best possible formulation. Interactive Fiction (IF) games use object state in much the same way; if the door is unlocked, one thing happens, and if its not unlocked, something else happens. In IF, the expectation has often been that these conditions represent conditions in the fictive world, in the story of what happened. Hypertext fiction recognized from the outset that it’s usually better to vary the plot, the way we describe what happened. If you’re watching the Super Bowl, you don’t want to be the quarterback, but you might well want to choose the camera angle, or to replace one commentator with another.

You can sometimes get by on the Web by using visited link colors and breadcrumbs. In fact, the first description of these features appears in one of our early papers on using dynamic links — links with guard fields — for technical writing. But this is clumsy, and you can do many things computationally that you can’t do by painting links a different shade of blue. (Blue links were a mistake, anyway; the hypertext research community understood this by 1991, but the early Web implementers missed the news.)

The notation that Storyspace has used for guard fields is bit cryptic. Networks of complex guard fields can be tricky to test and edit, because information about the work’s structure is scattered across dozens or hundreds of links. So one challenge for Storyspace III is clearly going to be a better notation, and some sort of visual debugging studio.

CP: What else would you like to say about Twine?

MB: More broadly speaking, Twine has no model for building a literary economy. Capitalism may be a bad thing, but it’s not our fault, and as artists we need to inhabit a world in which the economy exists. It ought to be possible for people to write seriously even if they’re not independently wealthy; Twine, like to much recent electronic literature, supposes that writing is a hobby.

All literary movements spring from partial isolation, but the various subgroups of new media tend not read sufficiently outside their social domain. There are exceptions, of course — Emily Short and Andrew Plotkin from the IF world, Cathy Marshall and Stacey Mason from the literary hypertext community — but they’re exceptions. I do wish, for example, that Twine engaged more directly with things we’ve learned from narratology.

But, yes: it’s progress, and so it’s very good news, and lessons from Twine will have a real influence on the design of Storyspace 3.

CP: What else is coming for Storyspace 3?

MB: One great advance is simply typography: these hypertexts all simply look much better with modern screen resolution and modern fonts. Remember: it was written when the state-of-the-art personal computer had a screen resolution of 512×342 monochrome pixels. So, new screens and modern typography will be great.

Another advance is going to be rethinking the interface for mobile devices. We want to be able to read and write on phones and tablets — naturally. But touch screens are alienated from conventional hypertext: when we are reading we are not touching, and when we are touching, we aren’t reading. We can’t read: our hand is in the way!

I’d like to see some work in hypertext fiction with Tinderbox, our tool for note-making. Tinderbox has a lot of representational power. It’s great for world building. I’d love to see how it works in fiction.

A few years ago, I wrote a paper showing why stretchtext had been so hard to use in narrative, and how to generalize stretchtext so it has the same expressive power as Storyspace. That might not be a Storyspace feature — it may need its own platform — but that’s also something I’d very much like to see.

We’ve got a bunch of other experiments under way, too. It ought to be an interesting year!

Prompt 3: Watershed as metaphor for digital content (see image below) MB: The customary metaphor is the rhizome, originally propounded in Deleuze and Guattari’s A Thousand Plateaus. And the rhizome might be a bit closer to actual linked text with all its cycles; water flows downhill, so you don’t really have cycles in the watershed.

Purely rhizomatic hypertext can easily seem directionless and flaccid. We know plenty of ways to overcome that problem — explicit structure, energetic writing, guard field, episodic gates — and of course we’re learning more. Lately, a lot of the progress in hypertext rhetoric has been made in print, in wonderful narratives like Jennifer Egan’s A Visit From The Goon Squad, David Mitchell’s Cloud Atlas, and Erin Morgenstern’s Night Circus. Punchdrunk’s hyperdrama “Sleep No More” managed a lot of hypertextuality in a terribly challenging context.

Corey taught anthropology for 12 years before founding Exprima Media, a software design and development company that partners with content providers to envision, design, and develop compelling and effective interactive experiences. Corey delivers presentations on a variety of topics including the future of publishing, interaction design, and global mobile initiatives. He is also a Fellow of the Imaginary College at Arizona State University's Center for Science and the Imagination.