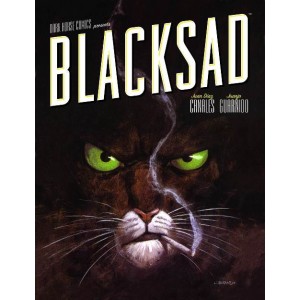 Colombine Depaire and Alicen Hubert offer concrete examples of the growing popularity of French BD and comics in the United States.

Writing in Publishing Perspectives this past December Samuel Sattin argued that “while Japanese manga has proven popular in America,  Franco-Belgian bande dessinée, which has a long a tradition and are just as appealing, has remain ignored.” Blacksad is just one example of a French title that has proven popular in the US.

Franco-Belgian comics culture is considered to be one of the world’s largest and most vibrant. Tintin, for example, originates from that tradition, along with the Smurfs, Heavy Metal, and—even though it’s a well-kept secret—Star Wars.

It’s hard to pinpoint why the American industry shuns its European cousins so thoroughly. It could be because of the fact that American comics are, like American cultural sensibilities in general, still fairly put off by the ostensibly intellectual (read: pretentious) styling of European culture, preferring instead a neoteric, if sometimes impractical, New World mindset.

Now, writing for the French Embassy’s cultural web site, Colombine Depaire and Alicen Hubert, offer a rebuttal. In “Why Do French Comics Sell Abroad?”, they begin by pointing out significant production of the French comics industry:

In 2013, 5,519 comic books were published in France, of which 25% were new editions and anthologies and 75% were new titles. The large number of new titles represents a rich variety of subgenres, including 1528 Franco-Belgian bandes dessinées, 372 graphic novels, 385 American comics, and 1575 mangas, among others. …Zeina Abirached’s A Game for Swallows is another.

Then they point to several success stories, including titles such as Blacksad, by Juan Diaz Carnales and Juanjo Guarnido [Darkhorse, 2010], Zeina Abirached’s A Game for Swallows [Graphic Universe, 2012] and Marjane Satrapi’s Persepolis [Pantheon, 2004] have been very popular in the U.S.

They also honor the work of Françoise Mouly [art editor, The New Yorker] and Art Spiegelman [Maus], as well as cite recent success’ such as the publication of Etienne Davodeau’s The Initiates and Christian Dureieux’s An Enchantment, the Last Days of an Immortal by Gwen De Bonneval and Fabien Vehlmann, and several more — many made possible by rights agent Nicolas Grivel, who “has helped bring the work of young European cartoonists to English-language publishers for the past four years.”

So, indeed, touché. It appears that success is relative. Alas, it also still appears that there is much ground to be made up when it comes to tapping into a mainstream American readership, as these books have in France. Then again, comics and graphic novels have themselves flitted in and out of the mainstream over the years, something that makes the already daunting task of selling translations all the more challenging.

You can read the entire article online at the Cultural Services web site of the French Embassy.