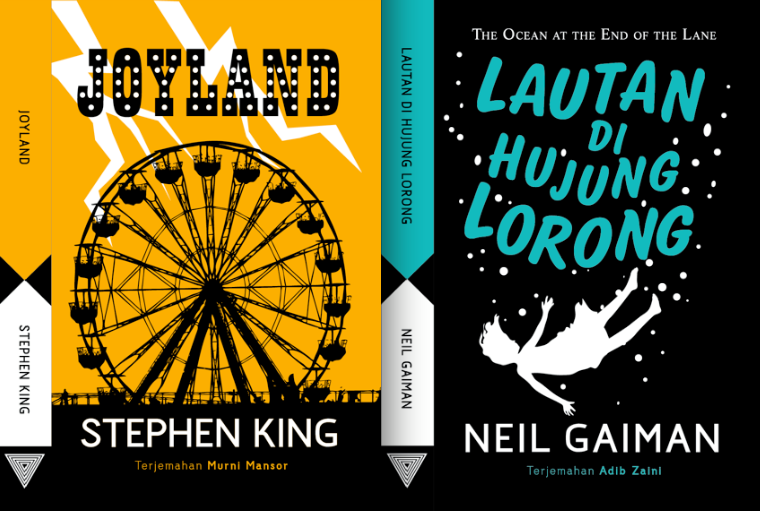 Young Malaysian publisher Buku Fixi is making waves, most recently with translations of novels by Stephen King and Neil Gaiman. KUALA LUMPUR: From its first days of operation in 2011, the publisher Buku Fixi has made a distinctive mark on the publishing world in Malaysia. It has four imprints or labels, as founder Amir Muhammad prefers to call them: Fixi publishes Malay contemporary urban novels; Fixi Retro publishes out-of-print Malay novels; Fixi Novo publishes English-language books. The latest endeavor, Fixi Verso, publishes bestsellers in translation and launched in January with translations of Joyland by Stephen King and Ocean at the End of the Lane by Neil Gaiman. PP: You recently published the Malay edition of Joyland by Stephen King and The Ocean at the End of the Lane by Neil Gaiman and started Fixi Verso. What led to the decision to start Fixi Verso and why the two books?

Muhammad: I wanted to spread happiness! These are two of the writers I enjoy reading, so I assume (or hope) that readers who are more comfortable with Malay would enjoy them too. I will only pick authors I enjoy; hence there will be no Dan Brown or EL James.

How has the experience been? Getting translators etc. And how much more does it add to cost – advance payment, translation cost.

It has been fun. Getting translators is a challenge as not only talent but stamina is required for a whole novel. It would be great if we had a ready pool of not only those who can translate from English but from other languages into Malay. The upfront cost is increased because the original authors are paid 6% royalties as if the first print run has already sold out. I also pay translators 5% royalties but give an advance. But if we succeed in going for at least a second printing, then the costs should eventually work out almost the same as for an original Malay novel.

How has the reception been to Fixi Verso? How many books does Fixi Verso plan to publish this year? And who are the authors Fixi Verso would like to translate?

“The third is most likely Haruki Murakami’s Colorless Tsukuru Tazaki and His Years of Pilgrimage.”

Well we just started so it’s hard to tell. But based on first-week online sales, I am reasonably optimistic that at least one of the titles will go for second print within 3 months of release.

We have no specific target for 2014; I will see which books we can get. We can’t take books that are too thick (such as over 400 pages in English) because translating into Malay adds 30% to the length and a translated book of over 500 pages would be priced beyond the range of our target readers (mainly the college-age).

The third Fixi Verso is most likely Haruki Murakami’s Colorless Tsukuru Tazaki and His Years of Pilgrimage which came out in Japanese last year but whose English version will be out only in August. His agent has agreed on condition that it is translated straight from the Japanese. Luckily we found someone who is able to do so, and she is working with someone who will make sure the Malay prose is idiomatic and flows well. Our plan is to showcase this translation at the Tokyo Book Fair in July.

What will be the key happenings for Buku Fixi this year that we should look out for?

We are starting a new label (no name yet!) for non-fiction, basically short works (about 150-200 pages) that are contemporary or polemical in nature. Perhaps each book will be printed just once or twice and then live on only as ebooks. The first book in this label is How Malaysia Never Reached the World Cup, a translation of a Malay bestseller by Lucius Maximus from 2012 but slightly updated. The book will have a subtitle but we’re not sure what it is yet; perhaps something like ‘Harimau Malaya’s 40-Year Chronicle of Failure.’ This is slated for release in March. We have also sponsored a Malaysian novelist to spend a month in Brazil to experience the World Cup itself; he will then deliver a novel but the content of the novel is entirely up to him as long as it’s called Brazil — like that Terry Gilliam movie.

Linda Tan Lingard is director of Yusof Gajah Lingard Literary Agency, based in Kuala Lumpur, Malaysia. She has been in the publishing industry for more than twenty years and enjoys meeting and writing about the people that shape the industry.