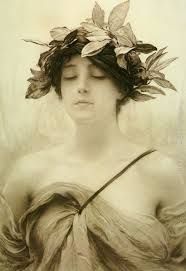 Daphne, the Naiad from Greek mythology who was pursued by Apollo before turning into a laurel tree, a myth that inspired Ovid, also serves as the eponymous  inspiration for Bookslut’s new prize.

Last month, we wrote about the Daphnes, a new award launched by the website Bookslut, to celebrate (or re-celebrate?) the best books of 50 years ago, which were eligible for book awards, like the Pulizter, in 1964. As Bookslut editor Jessa Crispin wrote, “We will write the wrongs of the 1964 National Book Awards, which ugh, decided that John Updike’s The Centaur was totally the best book of that year.” (The runners up that year were Idiots First by Bernard Malamud, The Group by Mary McCarthy, The Will by Harvey Swados, and the title that’s probably the most still read of all of them, a little book called V by Thomas Pynchon.)

Well, now the first ever Daphne short lists have been released, and they’re a beaut:

For me, any award that pits Julio Cortazar against Jim Thompson is already a winner. But if I had to select, I’d vote for Hopscotch, Anti-Intellectualism in American Life (perhaps more timely then ever), Requiem, and…Where the Wild things Are, although I’ll always have a place in my heart for Encyclopedia Brown.

What are your picks?

Editor’s Note: This article was updated on February 24. Bookslut editor’s name is Jessa Crispin, not Jenna Crispin. Books on this year’s first Daphne Awards list were published in 1963 but eligible for the National Book Award, Pulitzer, etc. in 1964.