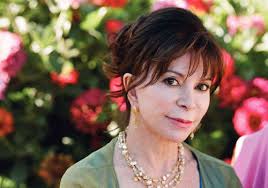 Isabel Allende, in admitting she wrote her recent mystery novel as “a joke” and  she’s “not a fan of mysteries,” has sparked a backlash. Recently, the acclaimed Chilean bestselling author Isabel Allende sat down to talk with NPR’s Arun Rath about her newest book and first mystery, Ripper (HarperCollins). She might regret having done so. In particular her answer to this question.

Allende: “Well, the book is tongue-in-cheek. It’s very ironic. And I’m not a fan of mysteries. So to prepare for this experience of writing a mystery, I started reading the most successful ones in the market in 2012. And that was the Scandinavians — Stieg Larsson and Jo Nesbo and those kind of people. And I realized that I cannot write this kind of book. It’s too gruesome, too violent, too dark. There’s no redemption there. And the characters are just awful, bad people – very entertaining, but really bad people. “So I thought, I will take the genre, write a mystery that is faithful to the formula and to what the readers expect, but it is a joke. It’s tongue in check. My sleuth will not be this handsome detective or journalist or policeman or whatever. It will be a young 16 year-old nerd. My female protagonist will not be this promiscuous, beautiful, dark-haired, thin lady. It will be a plump, blond, healer and so forth.”

That’s where the problems began. As Maggie Galehouse reported in the Houston Chronicle, Allende’s words “injected some bad blood into the mystery community.”

McKenna Jordan, owner of Houston’s Murder by the Book, had ordered 20 autographed copies of Ripper to sell at her shop. But on the same day that the books arrived, Jordan heard Allende’s interview on NPR. All 20 copies are being returned to HarperCollins.

“That’s one of the benefits of having a small business,” Jordan told the Chronicle. “If you don’t want to stock something, you don’t have to.”

But why would Allende insult the very same readers she hoped to sell books to?

“Mystery and genre writers deal with this all the time from so-called literary authors,” Jordan added. “But for her to have gotten paid to write a mystery when she doesn’t even like the genre – how would she expect mystery readers to react to that?”

Jordan is not the only one taken aback by Allende. Charlene Harris, author of the Sookie Stackhouse books posted her response to the interview on her website:

“Isabel Allende, originally from Chile and now living in San Francisco, is a bestselling literary author. I know many, many people who admire her intensely, and I am sure this is deserved. By all accounts she is a great writer. But as far as the mystery community is concerned she put her foot into her mouth in a major way.

“She thought she would write a mystery as ‘a joke.’ Though I don’t want to put words into Allende’s mouth, to me this translates: I’m so amazingly ‘literary’ that condescending to write a genre novel is incredibly funny….Allende’s book is Ripper, and before I read the interview, I considered buying it. But having devoted my professional life to genre literature, I don’t think I will.”

“Mystery and romance readers, these are people who read three to five books a week. Our readers know all the authors. They know classic mysteries, detective fiction, espionage, they know it all. Of course you have best-selling airplane reads that follow a formula. But you also have Kate Atkinson, Tana French and Gillian Flynn – who have literary merit but also write within the genre.”

But it might be Erin Mitchell, a book marketer with HEW Communications (a company she founded with her husband) whose angry letter to Allende on her mystery publishing blog, entitled “Hey, There’s a Dead guy in the Living Room” might have said it best: “I was going to title this post, ‘Why Being a Nasty Jerk to Readers is Not Good Marketing.’ But that seems a little too long. Still, it’s true… Look, if Ms. Allende wants to sneer down her nose from her stepstool at the rest of us, that’s her prerogative. But this interview insulted a lot of people, many of whom are influential when it comes to recommending books.”