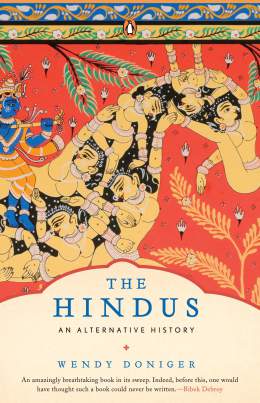 According to multiple sources, Penguin Books India has agreed to recall and destroy all copies of American Indoligist Wendy Doniger’s book The Hindus: An Alternative History from the Indian market.

Time magazine reports that in 2011, the Hindu nationalist group Shiksha Bachao Andolan filed a civil suit against Penguin India over the book, claiming that the book was offensive to Hindus by, among other things, “inaccurately representing the religion and offering an overly sexual interpretation of Hindu texts. This, it contends, violates a section of the Indian penal code that prohibits ‘deliberate and malicious acts intended to outrage religious feelings or any class by insulting its religion or religious beliefs.”

In the agreement, which has been posted on Scribd, Penguin India agreed to “with immediate effect recall and withdraw all copies of the book…from Bharat (Indian territory.” It goes on to say that Penguin will also no longer sell or distribute the book, and that all “recalled/withdrawn/unsold copies of the book shall be ‘pulped’ by Penguin at its own cost.”

In response, Doniger posted a statement on the Facebook page of PEN Delhi: “I was, of course, angry and disappointed to see this happen, and I am deeply troubled by what it foretells for free speech in India in the present, and steadily worsening political climate.”

Others objected to the decision as well. Time quotes historian Ramachandra Guha, who tweeted that the decision was “deeply disappointing.” Union Minister Jairam Ramesh spoke to the Press Trust of India arguing that “The book is not blasphemous. She is a scholar without any political agenda. The organization that demanded Penguin take such action is clearly some Taliban-type outfit. It is distorting and destroying our liberal traditions.”

India’s Firstpost.com noted that this isn’t the first time Doniger’s book has stirred controversy. In 2010, an online petition to Penguin USA backed by the Sarasvati Research Trust, had over 10,000 people sign to demand that the book be withdrawn.

That petition stated that the book was “riddled with factual errors and mis-translations.” It read: “Doniger analyses revered Hindu Gods and Goddesses using her widely discredited psychosexual Freudian theories that modern, humanistic psychology has deemed limiting. These interpretations are presented as hard facts and not as speculations. Doniger makes various faulty assumptions about the tradition in order to arrive at her particular spin. In the process, the beliefs, traditions and interpretations of practicing Hindus are simply ignored or bypassed without the unsuspecting reader knowing this to be the case. This kind of Western scholarship has been criticized as Orientalism and Eurocentrism. The non Judeo-Christian faith gets sued to dish out voyeurism and the tradition gets eroticized.”

And, according to Aseem Shukla of the Hindu American Foundation, who criticized her work online, “Parallelisms in her book conjure up obsolete anecdotes comparing the sacred stone linga representing Lord Shiva to a leather strap-on sex toy, and Lord Rama, one of the most widely worshiped deities, is psychoanalyzed to have acted out of fear that he was becoming a sex-addict like his father.”

Firstpost.com quotes Doniger’s response: “It highlights a narrative alternative to the one constituted by the most famous texts in Sanskrit (the literary language of ancient India) and represented in most surveys in English. It tells a story that incorporates the narratives of and about alternative people — people who, from the standpoint of most high-caste Hindu males, are alternative in the sense of otherness, people of other religions, or cultures, or cases, or species (animals), or gender (women).”

Time also noted that Penguin India’s decision “comes uncomfortably close on the heels of reports last month that Bloomsbury India was withdrawing another allegedly offending tome. According to local media, the publishing house withdrew The Descent of Air India, by Jitender Bhargava, after a defamation lawsuit was filed by former civil aviation minister Praful Patel, whom the book holds responsible for the airline’s financial losses. The publisher issued a public apology to Patel, who is currently minister of heavy industries and public enterprises. Bharjava stands by his book.”

Curiously though, readers both in and outside of India will still be able to Doniger’s book on Kindle. However, as Time points out, “buying a book online feels like something of a hollow victory if hard copies are being removed from the shelves of the local bookseller.”

Doniger herself praised Penguin in her statement. “Penguin India took this book knowing that it would stir anger in the Hindutva ranks, and they defended it in the courts for four years, both as a civil and as a criminal suit. But Penguin, she said, was “finally defeated by the true villain of this piece – the Indian law that makes it a criminal rather than civil offense to publish a book that offends any Hindu, a law that jeopardizes the physical safety of any publisher, no matter how ludicrous the accusation brought against a book.”

At the same time, as Publishing Perspectives‘ India correspondent explicates on her own blog, publishing freedom has always been tricky in India. What makes these two cases special is, in a sense, that they are out-of-court settlements. In most other publicized cases, there was a court battle. The main criticism against Penguin is that it gave up at lower court, and settled before verdict, yet we have not heard  Penguin’s response in order to  get clarity on how this settlement has come about.