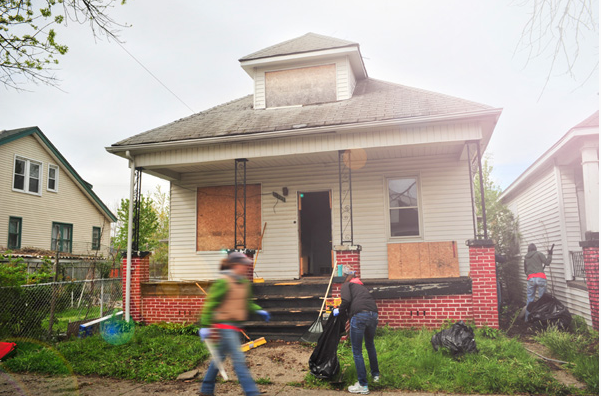 One of Write A House’s abandoned Detroit properties under renovation.

The city of Detroit is, as the world knows, facing a lot of problems, one of which is thousands upon thousands of abandoned vacant homes, many badly in need of repair. But a new nonprofit group, Write A House, has a solution: fix them up and give them to deserving writers, making, in effect, residents of writers in residence.

Write A House founder, author Toby Barlow, told the Los Angeles Times, “I actually grew up at a writer’s colony, Blue Mountain Center, smack dab in the middle of the Adirondack Mountains. My mother began it as the founding director when I was about 14. It had a profound effect on me – I met amazing people and saw what strong, positive community artists can build together.”

Another founder, Sarah Cox, is editorial director of the real estate cite Curbed. The Huffington Post reported that she relocated to Detroit from New York just three years ago in order to start the site’s Detroit blog.

In a press release, she noted, “In the past three years, I’ve seen incredible progress, but there is still much room for more in the literary arts. This is a city with unique, historic, and fascinating stuff happening. We think there are writers who will want to come and be a part of it.”

As a start, Write A House purchased three houses badly in need of repair in a neighborhood just north of Hamtramck in Detroit. The population there is a mix of Bangladeshis and African Americans, and while artists such as the well-known Powerhouse Project are nearby, it is an area suffering from the same high vacancy rates as much of the city.

“We chose this neighborhood to start because it’s a smaller community and we felt we could have an impact,” Kat Hartman, acting director of Write A House, told The Huffington Post. “The neighborhood has a level of vacancy that is affecting the quality of life for current residents. They need more good neighbors.”

Even so, Barlow admitted that “One of our concerns going in was that maybe there weren’t any writers who would be interested in this. After all, Detroit gets more than its fair share of bad press.” Even so, within 24 hours of the project’s launch, more than 200 interested writers contacted the organization to learn more.

According to the Huffington Post, Write A House will accept applications from working, ‘low-income’ writers in the spring, who will be asked to send in writing samples as well as a letter of intent. The judges will include the former National Poet Laureate Billy Collins, poet Major Jackson, writer and filmmaker Dream Hampton, as well as Sean McDonald, editor at Farrar, Straus & Giroux.

Writers from anywhere in the world are encouraged to apply; if they are accepted, they will have to commit to live in Detroit for at least two years, where they will lease the house from the nonprofit for a small payment just to cover taxes and insurance. (All the major repairs on the houses, each around 1000 square feet, will be completed, although the writer should be prepared to paint and help with all the finishing touches.) They will also be introduced into the local literary community, and be asked to contribute to a literary journal as well as participate in occasional public readings.

At the end of the two years, the writer will be given outright the deed to the house. “We didn’t want to create an atmosphere where people are being encouraged to flip houses, Francis Grunow, an urban planner on the board of Write A House told the Huffington  Post.

If all goes well, the goal is for the project to have a new set of houses in a different neighborhood the next year, and then another the year after that.